Dash in the Blue Pacific by Cole Alpaugh

Reviewed by D. A. Wetherell 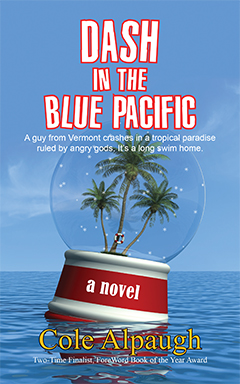 Dash in the Blue Pacific is the story of a man whose life is crashing down in every way imaginable. At the beginning of the novel Dash is traveling on an airplane trying to heal his troubled mind and broken heart. Dash has already fallen far enough in life that he has downgraded from taking delight in a wife to publicly pleasuring himself on an airplane. Yet Dash still has much more to lose. Throughout the course of the novel Dash must fall from the air, fall from his sanity, and fall from any sense of pride to which he once clung.

The main conflict of the novel is a fruitful and engaging one. Upon crash landing on a remote island, Dash is accused of corrupting the community’s supply of fish. The island natives inform him that their Volcano God now requires him to be a living sacrifice as penance for his sins. The chief offers Dash one way out of his new fatal destiny: he must sleep with a native woman and produce a white baby for the island.

Unfortunately, Dash’s genitalia are numb and out-of-order thanks to his final pleasure-filled act in the falling plane. Upon seeing this public indecency, the old woman next to him in the plane prophesied, “You’re going to hell.” Dash may not be sent to the unquenchable fire but it seems inevitable that he will experience the agony of a different kind of intense heat.

During his time waiting for the island chief to toss him into the mountain of fire, Dash is benefited by the company of two individuals. One is a young girl who aspires to be “chosen” by the white soldiers who sporadically visit the island to take pretty young girls as souvenirs. The second is a god named Weeleekonawahulahoopa (Willy for short) who retired from his divine occupation because he could not live up to the pressure. Needless to say, this story gets wacky.

Dash in the Blue Pacific does a fair amount of good in deconstructing false constructions of society. One cannot help but notice the significance in the numbing of Dash’s man-parts and disabling him from having intercourse. It’s tragic for a man to be infertile, and a struggle to deal with erectile dysfunction, but to lose the ability to have intercourse altogether is crippling. To be denied this basic human need is to be marginalized or ostracized for those who measure their worth by their sexuality.

Yet it is only when Dash cannot rely on his sexuality that he begins to learn about himself and live with others in a meaningful way. Most of the stories he brings up about his past have some sort of sexual relevancy with his ex-wife, but now he is forced into living a non-sexual lifestyle. This is exemplified by his friendship with the girl who wishes to be taken away by the white soldiers. Since she is much younger than Dash there is no sexual energy stemming from this relationship. In fact, Dash seems to form the deepest relationship he has ever had. It is arguably deeper than his relationship with his wife due to the lack of sexual tension, and because the relationship needs to be built on more stable building-blocks than sex such as trust, friendship, and a love that does not necessitate physical contact.

Of course this is not a topic for just Dash and the natives of this island to consider, but for all of humanity. Readers of this novel are entertained by the conflicts and humor, but they are also given some food for their soul. Where do I find value? One might ask after reading Dash. It might be in one’s sexuality, as it was for Dash. But the book suggests that maybe we should not reduce our value to one part of our existence.

The prose is rich in dark humor. Alpaugh is blunt in reference yet masterful in depiction. He always finds a way to make the reader smirk amid the atrocities. For example, Dash is reminiscing about the time when he walked in on his wife having an affair with Tommy Chambers:

It had been the second worst moment of his life. Finding his father in a pool of blood was still numero uno. Both made death by engine failure a cakewalk. “God bless us all,” the captain had said. Heartfelt words even to someone like Dash who believed as much in gods as he did Martians.

Cole Alpaugh is a grand comedian, and the conflicts and themes which exist in uncharted territory for traditional novels work well with his droll craft. The novel is full of magical wonders, melancholic gods, invasive spiders, and hilarious blunders from both Dash and the natives. “Boring” and “predictable” would be last two words to describe Alpaugh’s novel.

One critique of the prose is that the third person point of view may have limited the accessibility of Dash’s sarcastic worldview, thus tying Alpaugh’s hands at some moments where humor could have been enhanced.

Dash in the Blue Pacific is recommended for readers comfortable with borderline adult content and those interested in a little dark humor. It is not recommended for anyone who is squeamish at the mention of spiders, or offended at the mention of atheism, genitals, or premarital sex. For those whose lives are as organized as filing cabinets, maybe the existential collapse and recovery of another human being would make an ideal read.

Cole Alpaugh began his newspaper career in the early 1980’s. His most recent newspaper job was at a large daily in Central New Jersey, where he was given the freedom to pursue more “true life” essays, including award winning pieces on a traveling rodeo, and an in-depth story on an emergency room doctor which was nominated for a Pulitzer Prize. Cole also did work for two Manhattan-based news agencies, covering conflicts in Haiti, Panama, Nicaragua, El Salvador, and guerrilla raids conducted out of refugee camps along the Thai/Cambodia boarder. His work has appeared in dozens of magazines, as well as most newspapers in America. Cole is currently a freelance photographer and writer living in Northeast Pennsylvania.

D. A. Wetherell is an undergraduate student at Taylor University. He has been a volunteer book reviewer for Kregel, Cross Focused Reviews, and Blogging For Books. He writes reviews, essays, short stories, flash fiction, and literary analysis at Brofessional Writer