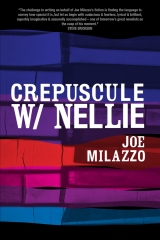 The song “Crepuscule with Nellie,” dedicated to Thelonious Monk’s wife, received its title from Monk’s mistress. The composition took time. Monk wanted to get every note right. When he felt he finally did, he planned to call it “Twilight with Nellie.” Monk’s mistress, Nica, a Rothschild and baroness, just happened to be in the room. She insisted Monk turn up the diction and use crépuscule instead.

In Joe Milazzo’s novel, Crepuscule W/ Nellie, Nica is at war with Nellie, claiming they are both “dedicated tuggers on the same rope.” Nellie isn’t so sure. When she and Monk fight she calls Nica “that swindling, cossetting Baroness” who “doesn’t have enough bottles of Shalimar” to cover up the stink of an all-night jam session. For Nellie, Nica brings into her marriage the “loving that’s a strategy against being unloved.”

This love affair is just one of the dynamics on display in Milazzo’s novel, a generous work somehow both fantasy and reference. There’s something in these pages for all kinds of readers, from the music scholar scavenging for in-jokes to the casual jazz fan; for those readers who dissect every page to those who skim a few. In order to tell his story, Milazzo utilizes a variety of forms including letters, diary entries, and dialogues interior and exterior. Some styles hit, others fall flat. Nica makes her case in a Dear-diary-it’s-just-you-&-me style, and her typical French problems with Eisenhower America deliver steady laughs.

The novel works best, though, when it’s just Nellie Monk. Milazzo gives her the same careful consideration Monk gave the composition written in her name: the household geography of her daily rituals, the egg crackling in an old iron skillet and those “sticks of spearmint chewing gum in a mason jar whose screw-cap is minus its little brass manhole cover.” We follow Nellie, alone, through the Upper West Side “on fair days often contributing her lagging steps to the effacement of hopscotch tournaments chalked-out on the concrete.” She’s a stoic woman who clips on (a favorite activity for this author’s female characters) “ice-bouquet earrings.”

Which is not to say Milazzo doesn’t give us Thelonious, the reason we probably pick up this novel in the first place. He does:

[Monk] was no Rubinstein, no Horowitz. No grave leonine head. No tails. Fallen socks. Nothing Listzian in his conception… all that knifing of knuckles and nails and encrustations of bevels and facets… three fingers colliding to activate a single note … hands crisscrossing so that suddenly the left, intruding over the right, was at work in the upper register. Often just the thumb and the pinky finger piled on, with the index, middle and ring fingers providing a strange sort of ballast, counterbalance in rigor… Monk batters out a middle C with two fingers atop one another and a thumb flung close to the outside of these stacked, stiffened knuckles.

That sounds like jazz writing, but is this a jazz novel? Well, chapter headings are called takes and masters. Coltrane licks reeds, Coleman Hawkins eats breakfast. But this novel isn’t puffing smoke rings in cramped basement clubs, the jazz-world Nica defines, in one of her more delectable stabs at pomposity, as “a persistently nocturnal expatriation indisputably downtown.” And this isn’t a novel partly inspired by jazz, like your favorite Frank O’Hara poem, or On the Road, or Yoram Kaniuk’s Life On Sandpaper, and it’s not like Nathaniel Mackey’s comic masterpiece Bedouin Hornbook, which is certainly a jazz novel. Maybe this not-jazz novel is closer to Geoff Dyer’s not-jazz novel But Beautiful, in that its genre, according to Milazzo, is “speculative historical fiction.” In a recent interview, Milazzo said he wants his characters to “become imaginative entities and not simply props in a sort of reenactment.” Maybe Milazzo’s novel is sui generis, which usually brings with it the tag of difficult. But this is not a difficult novel, even though it proudly chooses words like crepuscule over twilight.

In the end, maybe we should call Crepuscule W/ Nellie a jazz novel precisely because it plays against so many of the genre’s received ideas, and does so on its own terms unapologetically. Albert Murray once remarked “there is something of the empty ballroom etude in almost all of Monk’s compositions.” There’s a similar brimming emptiness in Milazzo’s book. Pick up this unusual novel, whatever kind of novel it is, and listen.

Joe Milazzo’s writings on music and experimental sound practice have appeared in Copper Press, Paris Transatlantic Magazine, One Final Note and Bagatellen, the latter for which he served as Editor-In-Chief. Milazzo’s fiction and poetry appears in Drunken Boat, Black Clock, Antennae, Super Arrow, H_NGM_N, kill author, Exits Are, the anthology Dirty : Dirty (also from Jaded Ibis Press), and elsewhere. Milazzo holds a Master’s Degree in Library and Information Science (MLS) from the University Of North Texas and a Master of Fine Arts (MFA) in Writing from the California Institute Of The Arts.