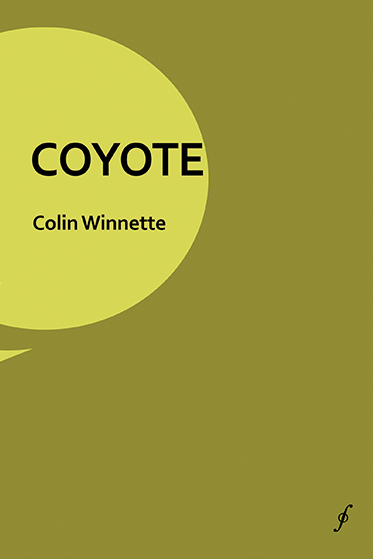 It takes me a couple of pages to figure out that the narrator of Coyote is female. What not to do before you start reading this story: Google Colin Winnette. You’ll have trouble getting the beardy guy out of your head. The narrator of Coyote is a woman. No beard. Though this becomes obvious within the first couple of pages, you’ll want to be on solid ground from the beginning. The story is fast and tight, and the ground in Coyote is less and less solid as you race along. You might even say things spiral out of control.

This disturbing yet gently human and, it must be said, award-winning novella is told from the perspective of a mother losing her mind—or maybe she’s always been a bit unhinged? Does the disappearance of her child drive her crazy? Or is something else going on here?

Similar to the story the narrator keeps repeating to detectives, talk-show hosts, to anyone who’ll listen —“we put her to bed, and when we woke up she was gone”— Coyote is constructed of fragments: moments with hours and days of question marks in between. What happened to the child during the night? The nameless child.

You can’t get too far into Coyote without realizing the members of this family have no names. The narrator refers to her husband as “her Dad,” a way to distance herself from him of course, but also a way to avoid giving him a name. The narrator, in my opinion, is working through how to love her daughter and her husband on a level so frighteningly honest and discerning—and creepily dehumanizing—that it’s difficult to know, at least at first, whether she is or isn’t, in a word, nuts.

But what happened to the child? This is the question that pulls the reader along through the narrator’s increasingly bizarre and fragmented account of her loss. This story is in fact a whodunit, which I can break down for you here hopefully without spoilers. The suspects:

The child – Yes, the child herself could have chosen to disappear. She’s characterized as a creative brat with a mind of her own, a rebel who did exactly what she wanted no matter what anyone said. “She was an opportunist.”

The father (“her Dad”) – He’s an abusive weasel of a husband: in the words of the narrator “an ugly man, an abusive, stupid, weak, ugly man.” He’s violent and impulsive, but is he a killer? The mother/narrator oscillates on this question like a wild boar turning on a spit.

The mother – She’s nuts. And she tells us at the very beginning of the story that we’re all capable of killing. In the first few pages, she tells us how she killed a few animals herself when she was a child, how her husband killed a coyote with a shovel, and how she wouldn’t be surprised if her child meant to kill their dog, Spot, the only member of this family with a name by the way.

The mysterious detective Mick Something – The mother suspects him eventually, so we should as well. After all, the narrator is always right, right? He visits the narrator only when “her Dad” is away. He’s passionate about the case—maybe too passionate.

The mother in Coyote is a dyed-in-the-wool unreliable narrator. We shouldn’t believe anything she says, except her insistence that she’s trying to love her daughter and her husband the best way she knows how. She loves her husband by forgiving and forgiving and forgiving his abuse, but her love for her daughter is more complex. It’s tactile. It reminds me of my mother’s suggestion to replace my grandmother’s monster Chihuahua with a stuffed animal so that it could sit in her lap all day and be still. It wasn’t in the Chihuahua’s nature to be still. The mother in Coyote needs to hold—restrain?—the child (the brat with a mind of its own); and even before the child disappears she wants it to “quiet down and curl up.” Figuring out how to keep her child and her child’s dad close to her is what keeps her sane. Again, she’s completely nuts. And you would be too if you put your child to bed and found her missing the next morning.

Maybe you’d be so distraught you’d destroy things. Maybe you’d slam your teeth against the kitchen counter, crucify yourself to the kitchen table, set fire to the child’s toys and bury them in the backyard. Maybe you’d just burn the whole house down? The spiral of violence in Coyote is offset by the narrator’s determined calm: the way she accepts the blows, the way they release her. The way this violence animalizes her. If you’ve read Winnette’s Animal Collection, you’ll know this is not the first of his works to treat the human condition in this way. Gradually deleting her daughter’s personality—her humanity—from her memory is the mother’s way of accepting the child’s disappearance.

Winnette writes in that sort of effortless-yet-insightful style that makes other writers want to rewrite everything they’ve ever written; this together with his willingness to plumb the darkest depths of human emotion, for lack of a better word, stuns. And the fact that he chose to do it from the perspective of a grieving mother makes it an acrobatic narrative feat you simply have to read. Just don’t Google his picture first.


Christopher Allen’s book reviews have appeared at PANK, The Lit Pub, Word Riot, Necessary Fiction, Books at Fictionaut and more. Read his short fiction in Indiana Review, Night Train, Contrary, SmokeLong Quarterly: the Best of the First Ten Years and many other sweet places. He splits his time between Dublin and Munich and blogs about his crazy life HERE