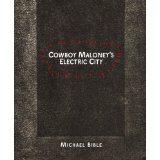 Cowboy Maloney’s Electric City begins with an epigraph from The Policeman’s Beard is Half Constructed:

More than iron, more than lead, more than gold I need electricity. I need it more than I need lamb or pork or lettuce or cucumber. I need it for my dreams.

These are the unedited words “written” by Racter, a computer program created by William Chamberlain and Thomas Etter in 1983. The goal of creating the program-writer, wrote Chamberlain, was to show what could happen if writing was “in no way contingent on human experience.” Within the first lines, Racter “writes” that “Love is the question and the subject / of this essay.” The Policeman’s Beard is a book about love written from outside of the flesh of being. Its machine logic feels like a dream made from the spark of metal.

It’s not electricity, but those dreams Racter needs electricity for that connect The Policeman’s Beard and Michael Bible’s Cowboy Maloney’s Electric City. The logic, the characters’ actions and their names, the shifts in timespace in both works are everything we know of dreams. But there is a distinct difference between the noun of “the dream” and the non-finite verb of “dreaming.” Cowboy Maloney’s Electric City is not a dream, that thing remembered when we wake, whose story we tell as if it were part of our past, like a broken bone or a once wet bed. Dreaming happens in the present tense; we cannot step outside of it and know it because we are in it. Bible’s book is the non-finite verb, not the noun. Cowboy Maloney’s Electric City is dreaming.

Or maybe it’s the dreaming that lubricates, lingers over the dream.

The slim, sometimes illustrated book begins in what seems a mythical west, near water and cliffs with a man and a horse and a princess who disappears into a forest and then moves without notice to the narrator and another woman in another time when there are already casinos and rockets. But “moves” is the wrong word. The narrator is in both places at once. In every place at once: with a princess, with a horse on a train, in a room licking a woman, in a swift boat, with the same licked woman looking at sexy Polaroids of her mother, with the same princess picking a scab. This is like how an electron can be. It is the quantum mechanics of dreams.

Dream logic is shifty and slick; it takes away the friction of expectation and lets us slip, sigh into whatever place awaits. Obviously, a horse named Forever would wear an eye patch “to make his bad eye better.” Obviously, there are hypochondriac princesses. Obviously, when Bible’s narrator says “Today Mrs. Kelly shows us war literature from Vietnam,” this is the same today as when a Christmas pageant is finishing and when a nude, rogue dentist named Commodore thinks about a girl who’s gone.

In Bible’s book, everything is lubricated. The narrator goes nameless until page 30, when he’s referred to as Maloney; later he refers to himself in the third person in an address to the reader:

I want some spurs and a cold beer. Everyday Maloney goes to town looking for the thing that can sweep out the malaise. Think nothing of this. Maloney is emotional.

Still later, Maloney is a rodeo champion in the sawdust, observed by the narrator. The lubrication of the dream makes smooth this corrosion of identity; the narrator is both men. Or they are the same man. We don’t need to step outside of the book to understand because we are in the dreaming of the dream of it.

But there are breaks. Just as it’s a lie that The Policeman’s Beard is outside of human experience, because Racter was programmed by the fingertips and impetus of two men, Cowboy Maloney’s Electric City isn’t so enveloped in the dreaming that it disappears into the ether and away forever from being awake. There are moments when the world intercedes; Freud called this the day residue, the actual that becomes elaborated, sometimes wicked in dreams. “Once, after a sledding accident, I saw a man dying in the waiting room,” the narrator explains about halfway through the book. This is a memory outside of the dream. It’s a different fiction than the dream. This happens again as the narrator remembers and becomes his father and his father and his father. These are moments away from and outside of princesses and dentists and an Apache named “Shoe.” Then a phone rings in the last pages. Like it does in our dreams when the phone really rings. And this marks the beginning of the end of the dreaming and the dream and the book: the princess is dead and the narrator disappears with his horse into the landscape of the beginning of the book.

The wonder of Cowboy Maloney’s Electric City is in how deeply Michael Bible takes us into this dream, this book, and how deftly he brings us out of it again, so that, upon second reading, the book has become a dream we’ve just had, one we struggle to use waking language to describe.

Michael Bible is the author of the chapbooks Gorilla Math and My Second Best Bear Rug. His work can be seen in FlatmanCrooked, Artifice, Oxford American and he was winner of the ESPN: the Magazine/Stymie fiction prize. He lives in Oxford, Mississippi where he edits Kitty Snacks.

Jess Stoner lives on an island off of Wales where druids once were and black sheep still are. Her first novel will be published by Short Flight/Long Drive Books (a division of Hobart) in 2012. She sometimes talks about things at http://jessstoner.com/.