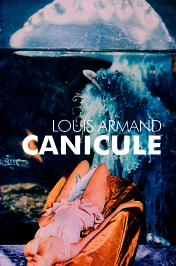 Canicule, the newest novel from writer and critic Louis Armand, opens with a scene of self-immolation. The suicide is a man named Ascher, friend to the novel’s central character and sometimes narrator, a failing screenwriter named Hess. The novel tells two stories: the story of Hess and Ascher and their third friend, Wolf, as children, spending much of their time on the beach during the summer of 1983 where, whether they know it or not, they await the end of childhood, and the awakening of sexual desire; and the story of Hess, twenty-two years later, himself waiting, for the return of his mysterious friend Wolf. From the beginning Hess is shown struggling to represent Ascher’s death in the stripped-down language of film treatment, trying to represent his own struggles with his own film through that same discourse. But those struggles seem to stop him in his tracks. In the novel’s early pages he wonders:

But why not tell it like it really is? Keep in the margins, let the story speak for itself. The two full reels’ worth. […] All I’ve got are images, I try to crack them open and see if anything’s living inside.

And this sentiment, to try to let things speak for themselves, seems almost to guide the book’s narrative, which switches from Hess’s first person narration to limited third person perspectives, usually centering on Hess’s point of view, but at times filtering through Hess’s wife, Louise (whom he calls “Luce”), or her lover, Ada. The narrative voice throughout adopts that same stripped-down treatment language, affecting a kind of hardboiled pastiche that acts as a cordoning off, a distancing from the messy truth of Ascher’s death. For all of Hess’s stated desire at the beginning to get somehow nearer to Ascher’s suicide, he spends much of the novel numbing himself to it, holding it at arm’s length, with alcohol, or through a seemingly put on macho, cynical rhetoric.

In many ways, Canicule is a meditation on failure. There is Hess’s failed film, one in a string of them. Though we don’t see much of Wolf until the very end, when he arrives from Beirut, the book seems to draw a ghostly aura around him, a kind of modern political nomad, going from hotspot to hotspot, aiding and fostering revolution wherever he goes. But Wolf represents a kind of failure as well. A failure of ideology. What Wolf stands for is always shifting. During the Cold War his rhetoric seems to have a Marxist cast to it; when the Cold War becomes the Global War on Terror, he adopts a hodge-podge of post-structuralist positionings. The only thing that remains consistent for Wolf seems to be what he is against: Capitalism, American Consumerism, Corporatism. But in 2005 when the book takes place (and in 2014 for that matter) these things are still as strong as ever.

Louise, Hess’s wife—though theirs is not a happy marriage—spends much of the book struggling to write a monograph on the fauvist painter André Derain. In fact, the reason that she and Hess are at the beach at Collioure in the first place is because Louise has gone there to see the landscape that stood as the inspiration for so much of Derain’s work. Her book is past due to her publishers, but for all she writes and writes, she, like Hess trying to get at the words for Ascher’s death, cannot get at what she wanted to say about Derain in the first place. It’s interesting calling up Derain’s paintings from Collioure, and noting the vividness, the almost hallucinatory intensity of the color palate he used to paint the seascape, when so often the beaches in Canicule are described as washed out, a blurred a horizon barely separating it from the gray sky:

You can tell from the waterline the tide’s coming in. A dull sheet of grey water conceals almost the entire stretch of black sand fanning out from the breach.

And perhaps this is the reason why Louise has trouble writing her book: Derain was painting a world that is gone, a modernist world, a world still potentially alive, a world not yet overrun by the ravenous –isms that Wolf so despises.

There are many ways that this novel is frustrating to read, and that isn’t necessarily a bad thing, but Louise’s story is perhaps the most frustrating of all. The second chapter of the book describes Louise being gang raped. Not surprisingly, in a novel that at every turn frustrates easy moves toward closure, toward answers, this storyline does not result in any sort of “coming to terms.” Certainly (and unfortunately) this very lack of resolution, and the numbness with which Louise responds to her attack, is truer than any of the readerly expectations that we might bring to the book, and which the book is probably even setting out to frustrate. Still, the narrative’s cool response to her ordeal will probably prove testing for many readers.

For all the failure in this book, there is, perhaps, by a certain way of looking at it, one success. Ascher. When still a boy, Ascher becomes a kind of primitivist painter/collagist. He takes over an abandoned building, turns it into a studio where he builds enormous constructions out of the refuse he finds on the beach, and what industrial paints he can filch from the docks.

Commercially he is a failure: the gallery owners in the little seaside town laugh at him, and in the end he is destitute. But that failure, in a book where capital, exchange, and consumption are seen as such destructive forces, could almost be read as an affirmation that what Ascher was doing was ultimately worthwhile, was art. Of course, Ascher is also the one who kills himself, and that seems almost to be the central tragedy of the book: the one character who actually makes something, and one of the only characters who does not relent to cynicism in some way, one of the only who allows himself to feel, who does not numb himself against his pain, is ultimately destroyed for it.

In French, canicule means “heat wave,” and certainly this reflects the novel’s overall atmosphere. There is a sweaty languidness that permeates everything in it. But canicule can also mean something like “scorching,” and this too seems apt. Ascher’s scorched remains come to mind here, but beyond that, so much of the book seems to describe what remains after a fire. A scorched earth. Again, the descriptions of the beach, with all their graytones, like ashes, but the people too, the living, seem somehow to be burnt husks. In Canicule we might think of Louis Armand as carrying out a Ballardian critique of modernity, where the beach is a wasteland and the balconied hotel rooms are ruins, and the people who go about amongst them are dazed and shell-shocked survivors who do not yet know that everything around them has been destroyed.

Louis Armand is a writer and visual artist who has lived in Prague since 1994. He has worked as an editor and publisher, and as a subtitles technician at the Karlovy Vary Film Festival. He is the author of four novels, including Breakfast at Midnight, Clair Obscur and his latest, _Cairo. He is also the author of seven collections of poetry (most recently, Letters from Ausland, Vagabond: 2011) and a number of volumes of criticism (including Solicitations: Essays on Criticism and Culture, Litteraria: 2008). He edits VLAK Magazine (www.vlakmagazine.com).

Bayard Godsave’s fiction has appeared in, among other places, the Cream City Review, Cimarron Review, Florida Review, South Dakota Review, Pleiades, and the Gettysburg Review. He is the author of Lesser Apocalypses, a short story collection published by Queen’s Ferry Press in 2012. His second collection, Torture Tree, will be published by Queen’s Ferry Press in 2014. Bayard is an Assistant Professor, teaching writing and literature at Cameron University in Oklahoma.