Blacken Me Blacken Me Growled by Cassandra Troyan 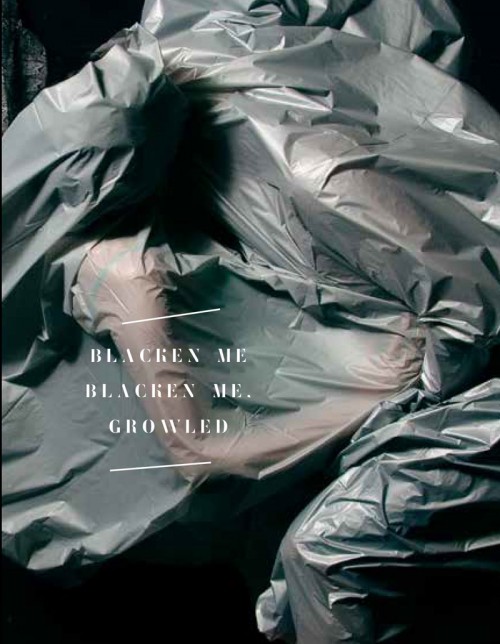 According to Cassandra Troyan’s latest poetry collection Blacken Me Blacken Me, Growled, every loving caress carries a hidden violence, a barely suppressed animal rage. A Chicago artist and curator of a popular city performance series, Troyan is no stranger to visceral writing that makes readers squirm, which her latest book more than proves.

Given the collection’s structure, the poems in Blacken Me Blacken Me, Growled cannot be easily extracted and anthologized without the reader losing sight of Troyan’s grand planning. There’s a progression to these poems, each of the four sections—“Carriages,” “Chambers,” “Shells,” and “Hides”—propelling a reader forward from an adolescent, violent sexuality to a more hidden but still unfulfilled adult melancholy. This progression lends a touch of performance to the work. Full of harsh syllables and line breaks that generate a breathing pulse, these poems were made to be read out loud. Troyan also defies the usual playbook with a multitude of poetic forms. One finds tight prose poems; clipped, fast pieces making expert use of the line break; airy works that move about the entire page and fill the space with silent suggestions between the words. The white, Gothic typeface of each title set against a full page of black creates the feel of a horror film. Blacken Me Blacken Me, Growled is less a group of related writings than an experience.

A central theme of Troyan’s collection is the violent, grotesque nature of sexual relationships. The first poem, titled “If I Could Only Say,” starts this motif with a bang:

Vivid word choices of active harm are used through the first section, “cutting” the body of one’s lover through that love. Troyan’s imagery is tightly of the body with lines like “fat of a nipple, ingrown hairs” and “salt of your palm to my lips.” The reader is immersed in the late, inexplicably angry stages of a relationship when familiarity with a lover’s body has turned to claustrophobia and disgust.

Troyan’s themes of open sex and violence fade throughout the collection in accordance with the section titles. “Carriages” are swiftly moving transports, which mirrors the wild sexuality of the beginning poems. From thriving carriages the reader moves to depressing, silent “Chambers,” and further into the self with “Shells” and “Hides,” protective containers. There’s a domestic, subdued quality to these later poems. The aggressive sexuality is internalized under a veneer of suburban imagery: Lawn care. Psychiatrists. Talk shows, frozen yogurt, and men turning into their fathers. But the desperation is still palpable in lines like these from “If I Could Recognize A Resonance”:

A day when I seek out some
moment of small hell
when I have to destroy
all illusions of semblance or place.
Someone help me smash
this shivered score

While Blacken Me Blacken Me, Growled has a dominant strain of sexual anxiety and violence that rings tiresome at times, Troyan occasionally has fun with her own bodily imagery and savage motifs. This play emerges most noticeable in many of the poem titles, including “Cars Clothes Hoes Extra Dough” and “I Want Everything To Hurt More Than It Needs To And Sometimes You Just Gotta Beat That Pussy Up.” As every title is given its own page (a few poems being nothing more than a title), these snarky titles sprinkle a self-awareness across the collection that keeps Troyan from repeatedly striking the same tone.

Any criticism of Blacken Me Blacken Me, Growled can focus only on small-scale problems. Troyan sometimes lapses into dense abstractions, her lines failing to pull together and intersect for some distance down the page. While readers may be asked to stretch their feet over an invisible ledge farther than is ordinarily comfortable, Troyan always brings her poems back around to a satisfying conclusion. By the collection’s end, a clear, conscious forward motion is visible. This progression ends with the section “Hides,” a fully formed skin to contain a rabid animal. The potent emotions of the initial poems are funneled within and barely peak out of the speaker’s new, protected self:

I’d say yes to a
temporarily frozen
forgettable timetable
enabling blank chant face
through my mimetic horseteeth
not by bigness measured,
but in adjustable worth.

Blacken Me Blacken Me, Growled ends with a subdued form of the beginning themes: humans depicted as gross animals. A desire for escape. Hate and love as interchangeable emotions, shadowed by the inevitability of sex. Cassandra Troyan paints a grimy, intimate world in which every person is filled with an impotent rage at her own self-awareness. While this book isn’t for everyone, the dedicated reader will get lost in the gothic sensuality and empty suburban landscapes Troyan has crafted. The experience of Blacken Me Blacken Me, Growled is wholly worthwhile.

Cassandra Troyan is the author of Throne of Blood, a poetic novella from Solar Luxuriance and the forthcoming Kill Manual (Kept In Lacerated Light) from Artifice Books. She curates the reading and performance series ARTIFICIAL EAR, in Chicago, IL.

Caleb Tankersley is a PhD candidate at The University of Southern Mississippi’s Center for Writers, where he is an Associate Editor for Mississippi Review. His work has appeared in Cutthroat, decomP, The Knicknackery, Midwestern Gothic, and other publications. His chapbook Jesus Works the Night Shift will be released in late 2014 by Urban Farmhouse Press.