Bigfoot and the Baby by Ann Gelder 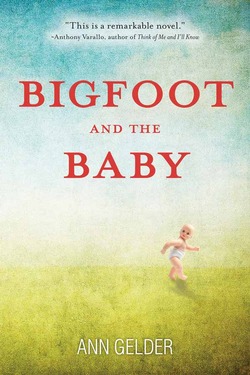 What I’m trying to say is, it’s sad the world is ending, isn’t it? I mean, all the suffering that’s about to happen. All the people—everything they’ve ever done and hope to do will be gone forever. Families are going to be separated—some will go to heaven and some won’t. Plus the sun and the sky, trees and dogs and cats and mountains—I just can’t imagine it all gone. Isn’t there some way we could get God to change his mind?

Bigfoot and the Baby begins on a slapstick note. Jackie Majesky’s husband Kyle, a police officer in suburban California, literally shoots himself in the foot while giving a presentation on gun safety. He takes this as the impetus to retire and focus on his career as an impressions comic. But his Brando is clearly a non-starter, and the story is really about Jackie, who is in the middle of a series of religious conversions.

First, she takes up running, and vigorous sex. Unable to find fulfillment in the pleasures of the flesh, next Jackie finds Jesus. And just in time, she realizes, because the world is about to end. It’s 1986 and the signs are all there: Chernobyl, the Challenger, war in the Middle East. She worries about her unsaved family, especially her unborn baby girl.

When Mollie was born in late April, a hush fell over the delivery room. The doctor was the first to say it: “My God, what a beautiful child.” […]

Jackie burst into tears. All her terror, all these months, had been for nothing. Mollie brought a message, all right, but it was not of doom, it was peace. All would be well. Jackie reached out for her child.

Mollie’s perfect little mouth twitched and opened. Out came a scream containing the pent-up grief of the whole world. And it did not stop.

Over the ensuing weeks, nothing quieted Mollie: not milk, medicine, proffered fingers, unconditional love, lullabies. Certainly not the handmade dolls that Grandma Tessa turned out by the bucket load. Jackie did the math. Mollie had come a full two weeks early to be born on the same day that the Chernobyl nuclear power plant in Russia had melted down. The book of Revelation said a star called Wormwood—“Chernobyl” in Russian—would poison the waters.

It was now obvious, to Jackie at least, that Mollie was no ordinary baby. She was some kind of prophet.

Jackie’s religion quickly turns from doomsday Christianity to utopian capitalism after her daughter Mollie is “discovered” by Harry Ricker, CEO of CarlsMart, a Walmart-analog named after Ricker’s tragically deceased son. Harry is no bog standard CEO. He has a vision: Christmastown, a domed Pleasantville where only the most devoted CarlsMart gift-givers (hereinafter, the “winners”) will be invited to reside. All he needs is a spokeschild to play The Christmas Spirit. Mollie becomes national celebrity, Jackie becomes her handler, and father Kyle and teenage sister Katie are left mystified by the whole affair.

A great strength of Gelder’s writing is how one event leads seamlessly to the next. As crazy as the plot gets, readers are not left asking just how we got here. Certain elements are definitely fantastical, but the characters are grounded in very real behaviors, and play off each other’s actions beautifully. The earnestness with which everyone pursues their goals is a rare treat, and while they often fail, or realize that they’ve been pursuing the wrong thing, they are never hypocritical. It’s refreshing in these post-irony times to see characters who believe—and not just in the traditional religious sense.

By setting Bigfoot and the Baby in the 80s, Gelder brings us a simpler time, when crass consumerism was about products and shopping. The symbols of excess are houses and warehouses filled with unused gifts. By itself, this would be a quaint message, but Gelder instead expounds upon the deep link between evangelism and consumption. Only by the grace of God does Jackie become a corporate executive instead of another housewife televangelical buying Dead Sea water and rapture pet insurance. The masses sign up in droves for the Carlsmart scheme because they are seeking their salvation in Christmastown utopia.

Jackie believes the rapture is nigh, but before she hears Ricker’s vision for Christmastown she is still anxious and questioning God’s plan for her family. By contrast, the Christmas Every Day scheme offers a direct formula to earning your place in “heaven.” He who gives most shall receive.

“CED members will never agonize over their moral standing,” Harry said. “Because they will be able to measure it precisely, and increase it when necessary, through their purchases. However, these are not purchases in the ordinary sense. Through CED each item people buy from CarlsMart becomes invested with humanity’s true purpose, which is giving to others.”

What you give doesn’t matter (so long as it’s from Carlsmart), nor to whom (a great many people buy gifts for Mollie, as if offering sacrifices to curry the favor of their deity). Bigfoot and the Baby has several powerful moments when the bubble gum surface pops away and the hungry capitalism on display becomes an existential horror. Most prominent is a chilling scene at the gates of Christmastown, when thousands of families show up trying desperately to gain entrance to paradise. Overall, Gelder has crafted a delightful, optimistic story, with just enough undercurrent to keep even a cynical reader enthralled.

Perhaps in order to make this feel a more contemporary narrative, Bigfoot and the Baby is sprinkled with devices like Katie’s punk band lyrics, an epic poem about Harry Ricker, and scenes from The Weird Frontier TV show (which seeks bigfoot for months on end). Some are more successful than others, but the novel is more than colorful enough without them. Such devices are put to best use in a series of standalone origin stories, including that of Everill Gander, the man who may or may not be Bigfoot.

Speaking of which, where does Bigfoot fit into all of this? Much like real life, Bigfoot walks around the margins of the story, and one simple encounter between woman and beast is enough to throw off the whole delicate system.

For Bigfoot time is not an arrow, but a game of cat’s cradle in the hands of an insane child. The line stretches and collapses and crosses over itself. Bigfoot leaps across a river and decades pas. A memory bursts in his brain, a young woman with braids smiles at him, and then an ocean roils with red foam. He sits on a rock and holds his head and tries to remember.

Perhaps Bigfoot is the guru Jackie was seeking all along.

Ann Gelder’s work has appeared in Alaska Quarterly Review, Crazyhorse, Flavorwire, The Millions, The Rumpus, Tin House, and other publications. She has taught literature at Stanford University and the University of California, Berkeley, and has worked as an online producer and marketing consultant. She lives in the San Francisco Bay Area.

Claire Blechman is from one frozen hinterland or another. She is an honorable-mention-winning writer, thanks in part to her MFA from Emerson College. Her work has appeared in The Fiction Desk, Gargoyle, Interrobang, the Ploughshares review blog, and the Vault Guide to the Top 100 Law Firms. She wrote her whole website by herself, then unimaginatively named it claireblechman.com