Behind the Eyes We Meet by Mélissa Verault 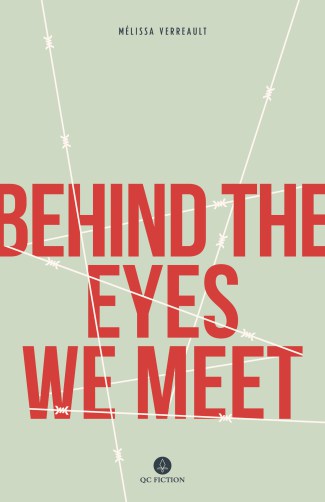 Appearing this month in English translation, Mélissa Verault’s 2014 novel Behind the Eyes We Meet (originally L’Angoisse du poisson rouge) unfolds as three major overlapping stories, spanning the present-day Plateau neighborhood of Montreal to the Russian labor camps active during the Second World War, to a small Italian town of both yesteryear and today. Throughout this journey, we meet a cast of misfits and dreamers, among them Sergio, an Italian prisoner of war; his bride Luisa, who waits patiently and writes letters while he recovers from tuberculosis in a sanitorium; their grandson Fabio, who immigrates to Montreal looking for more opportunity in the film industry; and Manue, a young graphic artist with a penchant for strange misadventure.

When her goldfish Hector mysteriously goes missing, Manue embarks on a quest to find him, hanging flyers around the neighborhood without much hope of recovering her valued companion. Along the way she runs into Fabio, with posters advertising a found cat. This moment of serendipity has all the makings of a meet-cute — “A fish lost, a cat found” — and the instantaneous connection between the two is played out in chaste whimsy rather than fiery romance.

The book’s construction contributes significantly to the enjoyable reading experience. The story is told in a series of short vignettes, each chapter taking part in a linear whole, while also forming its own moment in time, anchored by a singular image or occurrence. Reflecting Fabio’s filmmaking aspirations, the narrative style is distinctly cinematic, relying on meaningful imagery and dialogue.

In some ways, it is a Montreal story par excellence, not only because it so lovingly evokes certain immediately recognizable people and locales, but also because it allows itself to get caught up in the hazy wandering and happenstance that make up the art of living here. The book also feels particularly true to the character of the city in that its focus is drawn toward those who move from elsewhere, bringing the weight of their history with them. Montreal, if nothing else, is a city of transplanted individuals whose stories blend, slowly but surely, into the collective experience. As Fabio concludes, “That’s precisely it. I love Montreal, I’m happy here, I’d like to make a life in this city, but I’ll never feel completely at home… I’ll live half out of suitcases, half out of the space I’ve been granted, the space I’ll never own.”

After Fabio abruptly goes back to Italy for his grandfather’s funeral, and then returns even more abruptly to Manue, the book cuts to Sergio’s memories of his time as a prisoner of war. Captured by Russian forces in 1942, he survives five years in the camps, and returns home a witness to unfathomable atrocities. Yet even safely arrived, he sustains a feeling of continual threat, for, as he reflects, “That would have been easier: eliminate everyone the war had touched in any way so it could never be discussed again. Erase the unwelcome memory by wiping out the people who had lived through it.” His very existence — and, more concretely, his choice to write to his grandson about his time as a prisoner of war — acts against this erasure.

Much of the novel’s thematic content revolves around the transmission of trauma throughout time. How is the horrific experience of the gulag received by Fabio, not only through his grandfather’s writing but through a form of intergenerational memory? How does Manue’s loss of her twin sister in infancy, and the latent experience of this loss, create a perpetual sense of absence in her life?

While the first and last thirds of the narrative focus on the two younger characters, their stories are profoundly influenced by tragedies inherited from previous generations. The book begins with Manue’s mother Nicole, and provides stark detail about her discovery, at 27 weeks of pregnancy, that she had been carrying twin girls: “In truth, the second baby was quite the trickster; it hid behind the first, shielded from the light and out of sight. It was shy.” We then follow her shock and stoic silence when one of them doesn’t survive. Nicole tells no one — “It would be her little secret” — leaving Manue to spend her early life perpetually grieving a sister she doesn’t know about. For his part, Fabio becomes the recipient of Sergio’s gruesome time in the Russian labor camps, a story of survival, not only of the body but of the spirit.

But if Behind the Eyes We Meet is a novel anchored by trauma and the ways that unspeakable sadness passes through time, it offers this corollary: that love also has ways of being inherited. This notion is best expressed in the way that Manue and Fabio undertake their courtship, meeting in the wake of strange circumstances and falling in love with no recourse to physical contact, echoing the relationship between Fabio’s grandparents, Sergio and Luisa. Guiding us through such poignantly rendered stories of love and loss, Verrault’s most important premise seems to be that there is a distinct individual story behind the eyes of everyone we meet, and that those stories are what bring our humanity to light, even in the darkest of circumstances.

Mélissa Verreault was born in 1983. She has a master’s degree in translation from Université Laval in Quebec City and lives in Lévis with her Italian husband and their triplets. She has published three novels in French, all with La Peuplade: Voyage Léger (Prix France-Québec finalist, 2012), L’angoisse du poisson rouge (Prix des libraires du Québec finalist, 2015), and Les voies de la disparition (2016), as well as a collection of short stories. Behind The Eyes We Meet is the English translation of L’angoisse du poisson rouge, her first novel to be translated.

Arielle Aaronson has a diploma in Translation Studies from Concordia University and an M.A. in Second Language Education from McGill University. Her first translation, 21 Days in October, was published by Baraka Books in 2013 and she co-translated Listening for Jupiter, also from QC Fiction, earlier this year.

Bronwyn Averett is an editor and translator living in Montreal. She has written about books for publications such as Electric Literature and The Quarterly Conversation, and is on the masthead at carte blanche. She holds a PhD in French and is a specialist in African and Caribbean literature. You can find her at indirectlibre.com.
Share This