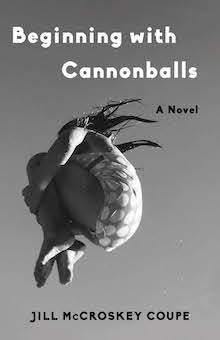 Novelist Jill McCroskey Coupe is fascinated by unconventional relationships. In her 2016 debut novel, True Stories at the Smoky View, she writes about an unlikely friendship between an older woman and a ten-year-old child, both of whom are struggling to come to terms with death and abandonment. Beginning with Cannonballs, McCroskey Coupe’s second novel, revisits this concept of friendship as a complicated locus of relational politics. In this novel, she examines how racial inequality can upset the power balance in friendships to disastrous consequences, but she never entirely closes off the possibility for connection.

The novel opens in Knoxville, Tennessee, in the year 1951, during the final decades of the Jim Crow South. A wealthy white family has employed a black caretaker, a young mother named Sophie, to watch over their newborn daughter, Gail. Sophie has a daughter of her own, named Hanna, who spends her early years living in the white family’s home with her mother as a result of complications at their own home. Gail and Hanna are inseparable in these early years, but they begin to grow apart as they age, and their distinctive racial and social identities sever their connective tissue. Hanna and her mother eventually move away and the girls lose touch, until Gail reaches out many years later in an effort to reconnect with her childhood companion. Thus begins a relationship that proceeds in fits and starts into adulthood.

The novel is a series of vignettes, tracing a majority of the life cycle of Hanna and Gail’s relationship. McCroskey Coupe chooses to highlight the pivotal moments in their individual lives and in their relationship, allowing readers to fill in the details of the intervening years. The novel includes the perspectives of both Hanna and Gail, as well as both of their mothers. These multiple viewpoints on the same situation add layers to the narrative and provide multiple access points for readers.

The novel is in many ways about misunderstanding. Despite their shared early childhood, there is a distinct difference between Hanna and Gail’s memories of their relationship dynamic. The novel picks back up during the girls’ college years: Gail is working as a waitress in a nightclub to help with college expenses, when she finds that Hanna is doing the same at a nightclub in DC. Gail decides to drive up to DC to surprise Hanna, and remarks to her travelling companion, “’In a way we’ve been leading parallel lives,’” to which her companion replies, “‘Parallel lives would never meet.’” This simple turn of phrase captures the fraught dynamic between the two girls, who superficially seem to be travelling parallel paths, but are living in entirely disparate realities.

After this meeting, the girls maintain minimal connection, until Gail reenters Hanna’s life in a time of great personal strife for Hanna. The traumas she experiences alienate Hanna from her friend, and also force her to question her place in the world. Gail makes it her duty to offer Hanna support, despite Hanna’s insistence that Gail’s privilege hinders her ability to offer advice. It also becomes clear that Gail saw their early friendship through a more idyllic lens, believing them to be akin to sisters. Hanna offers her version of events, “’Mama and I lived down in your crappy basement,’…’Did you know who ironed your sheets and made your bed and cleaned your toilet?’…’Washed and ironed your clothes? Or were you oblivious to all that, too?’” Gail is eager to present herself as an ally to Hanna, but has trouble understanding her role in Hanna’s lifelong struggle with inclusion. Hanna is conscious of all of her friend’s implicit biases and misguided efforts to connect, and it creates a distance between the two women that lasts into adulthood.

Ironically, it seems that Gail and Hanna are united in their struggle to belong, as both women feel alienated in the areas that they occupy. Hanna feels unwelcome in white spaces, while Gail struggles socially throughout her youth to connect with other children from wealthy white families. Both girls carry this anxiety into their adulthood, straining to make connections and form meaningful bonds.

These undercurrents of unease are not only present in the novel’s plot, but also present in its prose. McCroskey Coupe employs short sentences that pack a punch, rather than using flowery language or surreptitious explanation to unnecessarily dramatize the plot. This style feels firmly planted in the tradition of Southern writers like Flannery O’Connor and Harper Lee, who favor a more straightforward prose style and unsentimental approach, letting anxiety brew under the surface. The novel’s pared down dialogue also appropriately captures each character’s anxiety toward communication and connection, giving the reader a sense that there is always something beneath their words that they are not comfortable sharing. In one of their later disagreements, Hanna pleads, “Oh, Gail. For once in your life, could you please, please just let me be?” This simple question actually has a great deal lying below its surface: issues of race, identity, and relational politics. There are a number of analogous lines in the novel that carry similar heft in such a concise package, all of them underlining each character’s frequent inability to say what is really on their mind.

McCroskey Coupe inhabits the perspectives of the four women to create a vivid portrait of the many obstacles faced by women coming of age in the Jim Crow South. She is judicious in her narration, and does not seem to favor any one perspective over another. She rather lays bare each character’s truths, allowing the reader to piece them together. The sparse prose and vignette-structure allow readers to color the narrative with their own conclusions. McCroskey Coupe also relies on intertextuality, referencing visual art pieces and music that add layers to her characterization and plot development, while avoiding superfluous explanation. Overall, the snapshot structure, minimalist prose, and weighty artistic allusions allow McCroskey Coupe to manufacture a concise and aphoristic narrative despite the fifty-year time span. The novel is a testament to the importance of connection and empathy, and feels both timely and timeless in today’s fraught social climate.

Jill McCroskey Coupe’s first job was gathering (collating) in her father’s printing plant in Knoxville, Tennessee, in the foothills of the Great Smoky Mountains. A former librarian at Johns Hopkins University, she has an MFA in Fiction from North Carolina’s Warren Wilson College, in the heart of the Blue Ridge. The Southern Appalachians always feel like home to her, but so does Baltimore, where she now lives. She’s hard at work on her next novel, a series of linked stories.

Jessica Crandall is a marketing assistant at HarperCollins Publishers. She holds a Bachelor of Arts from the University of Notre Dame and resides in New Jersey with her family.