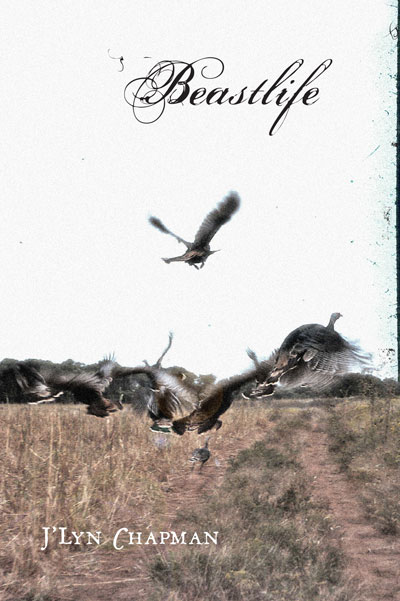 J’Lyn Chapman’s Beastlife is a collection in five distinctly different parts; two of these parts are prose, or perhaps prose poems, and three are essays. Some of the passages concern nature (human and animal). It includes illustrations, and among those are photographs of birds (some dead on the street, others dead and mounted in 19th-century museum displays). Beastlife is enigmatic.

The first part, “Bear Stories,” begins: “Once, I stood at the window and said, birds, come out of the ivy. They wouldn’t and they still don’t…” The narrator’s command or conjuring meets with refusal. We see glass again in the essay titled “We Continue to Unskin: On Taxidermy”: the exhibit barrier that separates us from the specimen. We see birds again, too: observed, dead on the street after a storm; collected, preserved by the taxidermist’s art. In the essay titled “A Catalogue and Brief Comments on the Archive Compiled and Written by the Ministry of Sorrow to Birds,” Chapman alludes to the poet John Clare’s bird poems: “What is the difference between the dumb bird in a glass box and the word bird performed on the space of a page?” The tone turns pleading, ashamed: “And when we photographed the finch with red on its breast and the soft, round head (slightly larger than our thumb), we felt greedy, and that we should make excuses.” The essay acknowledges that “…we are, in turn, satiated by our photographs, our lists, our elegies.” But those birds, the ones in the ivy, keep refusing to come out. Natural history museum exhibits of animals, those grand halls of taxidermy, “fail to tell us how it feels to be animal. The rest is unknown, a privacy so radical in its impossibility that the only response can be wonder.”

This statement may guide the reader of Beastlife toward a way of reading Chapman’s enigmas, written in elegant declarative sentences. The concept of wonder acknowledges the human gaze and the human desire to catalog, collect, and preserve, while not taking away the animal’s radical privacy. This may be why, in this collection, Chapman so often presents us with fur, feathers, or skin, a wing, an eye, or a snout. When she refrains from scientific names, the beast remains more itself.

Chapman gives so much weight, however, to antique forms of collecting and exhibiting animal nature (taxidermy, old-fashioned museums) that I wondered how, or if, her archive accommodates the beasts of modern social media and viral videos: the bear in the swimming pool, the bear in the dumpster, the bear walking on its hind legs in New Jersey…

If the life of animals is unknown to us, Chapman suggests ways for us to speak as human animals. Perhaps Beastlife as a title can be understood as a way of saying autobiography or memoir, (bringing to mind the ZYZZYVA anthology of autobiographical works, AutoBioDiversity). But the self that calls through a window to birds can’t make that barrier go away. In one of many visionary moments, Chapman observes: “Someone drove half a house down the center of the highway.” So what do we do inside that house, on our side of the glass? Perhaps the answer is suggested in this serene passage: “…I take on the attitude of February. That is, I become something quiet and waiting.” Is this a radical attempt to shift point of view, to get outside the house? It’s also uncannily impersonal, almost as if she’s become that glass barrier, mirroring the world and time.

Puzzling over the enigmatic Beastlife, whose title evokes medieval bestiaries, this reviewer thought of how some of the earliest writings in English literature are Anglo-Saxon riddles (called, in Latin, enigmata). In this riddle, the animal narrates its own transformation into vellum or parchment:

A certain enemy robbed me of my life,
stole my world-strength; afterward he soaked me,
dunked me in water, dragged me out again,
set me in the sun, where I swiftly lost
the hairs that I had. Afterward the hard
edge of a knife, with all unevenness ground away, slashed me…

This would seem to contradict Chapman’s idea of the animal’s radical privacy—in the riddle, there’s both a direct assault on the animal and the claim to speak as that animal. Perhaps the difference is that in those days there was no glass. Beastlife seems an ambitious attempt to get back to the skin of things.

J’Lyn Chapman grew up and currently lives in Colorado. In addition to Beastlife, she is the author of the digital chapbook, The Form Our Curiosity Takes: A Pedagogy of Conversation (Essay Press). Additional work can be found in Conjunctions, Zone 3, DIAGRAM, Fence Magazine, Denver Quarterly, Two Serious Ladies, and Caketrain. She teaches at Naropa University.

Erica Olsen lives in Cortez, Colorado. She is the author of Recapture & Other Stories (Torrey House Press), a collection of short fiction about the once and future West.