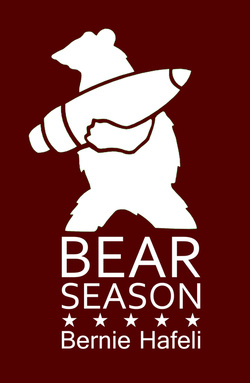 Given that the story is named after and relies on the features of something that seems like a myth, a soldier bear named Wojtek, Bernie Hafeli’s Bear Season is bound to be gloriously odd. Part of its oddity comes from a difficulty to situate the story; Bear Season happens at the boundaries between Poland and America; WWII and post-WWII; childhood and adulthood; and the extremely fine boundaries of what we believe, what we want to believe, and how we come to believe. Mostly, our characters (and ourselves, as readers) are trying to believe in human decency.

Situated in these blurred settings, the story is fraught with an almost collagist feeling as we move from the past to the present, to the present recalling the past. The whole story happens in past tense, nudging readers to wonder about how we are shaped by what has come before. In one scene, we see our two main characters—Uncle Izzy (Izydor) and Chester (Czeslaw)—observing the stars:

“Somebody told me. Now I’m telling you.”

Indeed, this is how we come to know, by listening to and trusting what people tell us. Chester learns, in this scene, about Ursa Major, a myth he finds hard to believe, “It’s a myth. Myths are always hard to believe.” But it’s not just myths that are hard to believe, it’s truths too. Chester is struggling to believe the stories about the past:

“But the Wojtek stories are true?” [Chester] said.

[Uncle Izzy] shrugged and at the same time nodded, then held his hand out flat to the roof and wobbled it slightly from side to side, like a canoe in turbulent water. “Sometimes I enhance.”

Chester, an 11-year old boy who attends Our Lady Queen of Martyrs, is entrenched in the places between doubt and trust, wondering how much of what he’s been taught is enhanced. Even at school, he wavers between wanting to believe the nuns and wanting to believe his uncle Izzy who says, of the nuns stories, that they are “hokum the nuns made up to keep [kids] in line.” But the real narrative is fixated on the family drama of his drunk Uncle Izzy, his dead father Aleksy, and his protective mother whose love is difficult for him to understand because of her own desire to enclose Chester in a world without pain and loss. At the seams of the family drama, Chester wants to believe his uncle, wants to trust the stories about his father, and wants to believe that his uncle isn’t a diffusely failed drunk who makes up stories and worries his mother. Every adult in Chester’s life wants to keep Chester “oblivious to our [human] shortcomings.”

While it might seem like coming to trust the Wojtek stories is the story’s, or even Chester’s, main pursuit, coming to understand his mother’s love, is a more intricate story that stays in the margins. Hafeli carefully suffuses the gravity of this relationship by molding a story that keeps Uncle Izzy at the forefront, but continually imprints an increasingly primary connection between Chester and his mother.

The story of Chester’s maturation coexists with the true story of Wojtek the Soldier Bear. Wojtek, according to Uncle Izzy, fought alongside Izzy and Chester’s father in WWII. Chester is told the bear thought himself human, carried shells to battle, and loved his father and uncle as if they were his brothers. When Izzy tells the Wojtek stories at bars, Chester watches people shake their heads at his uncle. Of course, this sense of distrust and dislocation speaks to the immigrant experience Izzy and Chester’s mother endure, and that subtle correlation happens in shiny fragments that reveal the difficulty of claiming an American identity and moving beyond the past. This is what Hafeli is good at, fluttering between the story that’s happening and the many other stories that flash under the surface.

To Chester, meeting Wojtek, ascertaining the truth, is his greatest desire. The “Wojtek stories, [began] to feel like truth; too preposterous to be made up.” Izzy says, of the stories, “No one could understand it,” and we know that he is speaking about the war, Poland, his alcoholism, the loss of his brother, and the difficult experiences he’s endured. These moments, where what is said echoes, reveal the true overture of Bear Season.

Hafeli doesn’t hit us over the head, but naturally develops a story of subtleties. Does Chester’s mother love him? Did his father?

Did he talk about me?”

My uncle looked at me. “Aleksy?”

Uncle Izzy contorted his face like he was trying to remember something that was proving difficult. “I remember your father talking about your mother, all the time, and about our family and friends in Zielonki, but—”

Here he pretended to concentrate even harder.

“—no, I don’t think he ever mentioned a son named Chester.”

“You’re kidding.” This was our routine.

“Of course he talked about you,” my uncle said then.

“He couldn’t stop talking about you. You were his greatest joy.”

In a way, Hafeli gives us a writing style that is akin to curation. He selects scenes that slowly reveal a fuller story (or even stories the touch each other), but does not give us a neat theme. Readers are invited to think about the undertones of religion, the immigrant experience, and the deeper question of how we come to know and trust love. Like any good curator, he preserves what we want and what we want to look away from—understanding that balance as being more true to life. Bear Season is filled with alcoholism, smallpox scars, strands of cartilage, and acts like wiping saliva off of mouths, even Chester looks away from these more grotesque realities. We are asked to find a point of entry into these difficult scenes and the difficult subject matter by remembering that humans are capable of ugliness and mistakes, but they are also capable of creating beauty—like a bond with a bear during a time of war. From the beginning, we see humans in this duality:

He’s not a shit. He’s a human being who sometimes acts like a shit.” At the edges of [Uncle Izzy’s] brown eyes, pink smears were bleeding into the whites. “The thing about human beings,” he said, “is you don’t always know why they do things. Sometimes bad things happen and it makes them behave in ways we don’t like.”

Bear Season, like the true story of Wojtek the Soldier Bear, creates a breathtaking landscape of human capability where our ability to overcome negative tendencies is celebrated. Our characters seek individual meaning and come to understand the depth of their relationships to each other, the past, and myths. Hafeli’s medium, the book, is not simply dominated by language and narrative, but turns to a more direct connection to the world Hafeli wants to describe by relying on the margins, echoes, and the links he makes to reality that parallel the connections early stargazers made when they looked at the pattern of the stars and saw a Great Bear.

Bernie Hafeli has been published in The Berkeley Fiction Review, 34th Parallel, The Rejected Quarterly, and elsewhere. He holds an MFA in writing from the University of San Francisco. Bear Season is his first novella.

Kristen Orser (Crouse when she’s feeling “married”) works in text and image and is the author of the chapbooks E AT I (Wyrd Tree Press), SQUINT (Dancing Girl Press), Folded into Your Midwestern Thunderstorm (Greying Ghost Press), Winter, Another Wall (blossombones), and Wilted Things (Scantily Clad Press). Her work is often in pieces on the hardwoods and always in process.