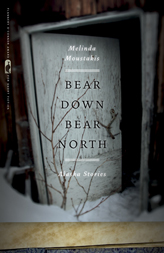 The photo showed a grizzly on its hind legs, leaning on one of those half-sized school buses, paw inside a window, lips pulled back above those amazing teeth. The article explained that the starving bear had come upon the bus while it idled on the street of a small Alaskan town. The bear shook the vehicle and eventually tipped it over. The children were injured, one seriously because his head wound couldn’t be treated until the bear was taken care of. I was maybe seven or eight when I came upon this story one Saturday in our local paper. I remember sitting frozen over the picture, imagining what it must have been like to be one of those kids. How terrifying. How exciting.

Growing up in the Pacific Northwest, these kinds of stories were everywhere. Fishermen who spent their summers in Alaska told them. Campers and hikers passed them around at dinner parties. The newspapers and TV news made sure we knew that, compared to the lower forty-eight, the Alaskan wilderness was truly wild. Real frontier land. Raw wilderness. A mythical place where humans and nature were in constant confrontation.

Americans are gifted at myth-making, and the legendary savage beauty of Alaska is one we like to hold in awe. Even at the risk of reducing it to a stereotype. So it was a real pleasure to read Melinda Moustakis’s collection of linked “Alaska” stories, Bear Down, Bear North, (winner of the Flannery O’Connor Award for short fiction) and find that her work nearly refuses to engage with Alaska on these overly condensed terms.

Make no mistake, nature is no friend to the people in these stories, but their most savage confrontations are with each other and with themselves. The natural world is only an accessory, and very often a witness, to their conflicts. In this way, Bear Down, Bear North is much more than a book about Alaska, or about people living in Alaska. It is a book about people, period. These are stories that dig deep into the fragile and difficult spaces of human experience.

Yet this notion of storytelling and how it creates myths is very much a part of this collection. Almost all of the stories are created by one character telling about the life of another, while the entire collection is filled with echoes of the other stories. These fictional ricochets turn many of the characters into legends, for both the other characters and the reader. Here, in “This One Isn’t Going to be Afraid,” which is narrated by an unnamed woman we learn is Colleen’s daughter. The reader has met Colleen in another story cycle, but now she and her siblings have moved beyond what “really happened” to become the stuff of legends:

My mother wears a ring now topped with a boulder of a diamond and calls herself a “sparkling bitch.” Every one of her fingers has a wide inner tube of a knuckle, an obstacle a ring has to fit over. Both of her pinkies are crooked—boomerangs she says—breaks that weren’t allowed to heal properly. Her sisters have the same hands. Her brothers have worse—they are missing tips and parts of fingers. They all have stories full of funny accidents and slips and remember-whens and they laugh about it all, but their hands tell a darker truth.

Colleen’s daughter isn’t the only woman to focus on her mother. In fact, throughout Bear Down, Bear North, Moustakis describes and re-describes different incarnations of the mother/daughter relationship. She is skilled at showing how these connections must harbor great fragilities as well as points of unbreakable bond. That unbreakable bond often comes from the daughter’s admiration of the mother’s strength. Her recognition that although this older woman may not be perfect, may, in fact, be almost unbearable much of the time, she has overcome what most others would have found insurmountable.

Puppygal and her mother, in “Mr. Furface Needs a Girlfriend,” go fishing after Puppygal’s father gives away her college tuition to her dead-beat uncles. Fishing is not just balm for anger, but a chance to correct the damage that’s been done. Puppygal believes this, because she believes in her mother:

She could have a skate or shark or a record-breaking halibut as wide as an ice flow that could carry me and her and Mutts and Uncle Dude and Uncle TooSoon and Eddie and Mr. Dean off into the gulf, or it could be an old barn door someone threw in the ocean. Or she could lose this fish before we see what is on the end of the hook. It could be nothing. Junk. A snag. It could be everything. But I know that no matter what Ma reels in, it will mean what she needs it to mean, for her and for me.

Giving away Puppygal’s tuition is probably the slightest of fatherly offences in the entire book. With a few noteworthy exceptions, the men in Moustakis’s collection are often a disappointment instead of a source of price, and are almost always frightening and dangerous instead of comforting and calm. Without a trace of melodrama, she writes of men who beat their wives and daughters, who abandon their families, who drink themselves sick, and in one case, of a man who takes an unknown woman into the woods just to shoot her like an animal as she runs away.

No, these are not easy stories. But they do achieve a certain hard beauty. Moustakis’s prose has a careful, even gentle, rhythm that subverts the violence in many of these scenes, and while she avoids promoting an overly simplistic cause and effect relationship of hard country/hard people, she has a good eye for bringing the rawness of Alaska’s beauty into direct comparison with her characters:

The midnight sun sinks behind me, slips below the horizon. Ahead, the Alpenglow caps the mountains in a gold sheen. There is no straight line between the two. The light from the downing sun reflects off the horizon, the sky, air and clouds and ice, and appears as a faint mirror of itself on the opposite side. There is no straight line between my mother and I. Between us is a homestead and a hunting stand and acres of thick woods and she is running and I am running after her.

The collection includes both snapshot-like flash fiction as well as longer stories, yet all are tightly connected to a powerful and cohesive fictional vision. This is an impressive début collection from a writer with great promise.

Melinda Moustakis is a visiting assistant professor of English at Pacific Lutheran University in Tacoma, Washington. She received her MA from UC Davis and her PhD in English and creative writing from Western Michigan University. Her work has appeared in journals including Alaska Quarterly Review, Cimarron Review, Kenyon Review, and New England Review.

Michelle Bailat-Jones is a writer and translator living in Switzerland. Her fiction, translations and reviews have appeared or are forthcoming in various journals, including Ascent, The Kenyon Review, Xenith, Hayden’s Ferry Review, Atticus Review, The Quarterly Conversation, Cerise Press and Fogged Clarity. She is the Reviews Editor here at Necessary Fiction.
Share This