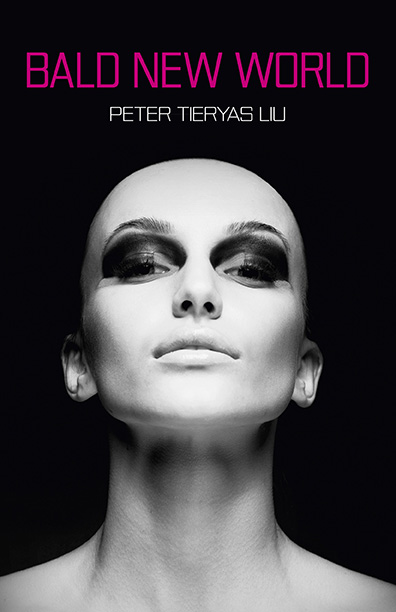 Peter Tieryas Liu’s Bald New World displays inventiveness both wild and thorough in its creation of a dystopic future born of the inexplicable but world-changing event of the Great Baldification (twenty-five years before the present action everyone on the planet suddenly and permanently lost their hair). The novel takes us into the heart of a global culture of celebrity and falsified glamour, vast wealth and vaster poverty, where gun violence is so much the norm in the cities of “America” that everyone going anywhere in public in L.A. wears protective armor, where global entertainment awards pit Jesus the General, the adventures of a Rambo-like, Son-of-God savior of the planet, against the Real Life of Rhonda, which documents the international sex tourism of a sixty-year-old ex-porn star who looks nineteen. Ordinary experience is digitally mediated and inextricable from electronics—with driverless cars, holographic waitresses, portable holopods, holographic media, interactive reality TV, while gaming and gambling provide more deeply visceral thrills. In other words, save the Baldification, and a few decades of technological advance, this is a global culture much like our own.

Throughout the novel we also encounter the marginal aspects of this world—a drop-out religious cult with names drawn from Melville who kidnap and torture people into conversion, a seedy gambling town where insect fighting via electronic interface creates its own subcultural hierarchy of winners and losers, a network of terrorists bombing wig factories, a nameless body of protestors who find a life of freedom by running naked en masse through traffic-jammed L.A. For all its violence, this world has not submitted entirely to state or corporate control, and it is this semi-comic free-market world that the novel lays out before us.

Nick Guan, protagonist and narrator, is a thirty-six-year-old victim of belief in the American Dream, veteran of the African Wars of a decade before (where his work was digital cleanup of video images for media consumption), now cinematographer for films made by his friend Larry Chao, sole heir to a superfortune in wig manufacture—hair in this bald world having become the most valued of precious commodities.

After a prologue establishing the Baldification (eleven when he wakes up bald, Nick records on his cellphone an image of a man dead in the street—everyone panicking at sudden universal baldness—his first presence to death made bearable as digital data), the novel’s early chapters appear to be driven by playboy filmmaker Larry Chao’s pursuit of women, or more often “girls.”

Irritatingly juvenile in tone, these chapters appear on first read only to establish backstory and to set up the world and the almost inexplicable friendship of the two men. Larry’s belated statement of self-awareness four chapters in—“I’m about to turn 40, man, and I’m trying to act like I’m 21”—does little to alleviate the discomfort of prolonged narrative intimacy with characters said to be in their later thirties who, on the page at least, seem no older than teenage boys, immature ones at that, with no conscious experience of life or people or one another or their world.

Happily, this narrative start turns out to be as deceptive as other appearances in this world—where wigs and tattoos are worn in place of hair, and celebrity “image facilitation” (plastic surgery) that upgrades models and actors can for the right (very high) price transform anyone into a celebrity lookalike. Masked by what seems trivial, more than character and backstory is being revealed.

When bombs go off at several of Larry’s wig-making factories, the action picks up, and the challenges that follow as Nick’s world unravels serve to mature him from long-suffering loyal sidekick to courageous, free man. In the midst of the accelerating magic of the plot, this trajectory of Nick’s maturing provides the heart of the novel and ultimately delivers its emotional satisfaction.

Bald New World asks to be read as literary fiction, and in addition to its own abundance of literary nods and winks, blurbs and reviews invoke Huxley, Orwell, and Murakami, as well as Philip K. Dick and Neal Stephenson. (I would suggest affinity with William Gibson’s Neuromancer and TV’s Heroes myself, except that BNW is in fact its own book.)

But what do we mean by designating a work of fiction “literary”? Engagement with other works of literary fiction? Check. Attention to character, to psychological, moral and ethical dilemmas, to contemporary social or political issues, even to metaphysics? Check, check, and check. And then—did we forget?—there is, if art is too much to ask for, at least care in the use of language.

Here, in the realm of language, is where Bald New World falters. At the level of word, image, and sentence, the language is at best uneven—sometimes brilliantly evocative, as in the cricket-fighting sequences, but frequently undermined by confused logic and syntax and careless excess in piling figurative images one on top of another. For an example, consider this ambitious passage of rising rage when Nick is being tortured—

I just wanted to punch the sun in the face, let it feel my hands as nuclear implosions, scrape away the hydrogen bursts and swallow it like an overly spiced jalapeno, spitting out the seeds. The seeds would spring from the dead earth and form flowers of discontent that would blossom into a hundred reborn stars outlined as constellations of vagabonds. We’d rage a war, sun versus the stars of the earth and duke it out. Not for dominance, but the darkness of anonymity, the billions who sacrificed themselves so that other suns could burn brightly.

At times the language is sloppy in word usage or sentence construction in ways a good copyeditor (that dying breed) could have attended to. At other moments, the problem is one of ear, for example (beyond the strained literary humor) this—

The knife came down along my neck. I didn’t feel anything at first, just warmth along my neck. The pain followed a few seconds later as my sensors cried havoc and let loose the Chihuahuas of war. Blood slithered down the side of my neck.

Oddly, this lack of attention to the material properties of the language—not what as a medium it pretends to represent but its own construction and sound, its music—mirrors an absence felt in the matter—the actual stuff as opposed to the illusions—of the novel’s world. (And at some partially conscious imaginative depth it may be this absence that is most revealing about our own time.)

Power as we know it does not appear directly in Bald New World, neither in terms of the physical energy that drives this great machine, nor in terms of the governments supposedly in command. References are made to police and prison complexes, to North Korea’s Great Leader, to government officials and agencies owned by corporations (the F.D.A. bought by a fast-food chain), to a large military presence in L.A., to U.N. Peacekeepers (the army that fought the African Wars), but none of these government actors participates in the action, remaining almost invisible in the shadows cast by the plot’s fireworks and razzle dazzle, their palpable absence one of the book’s unanswered questions, perhaps an unasked one.

Similarly, the material basis for this world is not made explicit. We are in the latter half of the 21st century on Earth. For the prosperous, food seems abundant and varied—but where does the water come from? The environment is polluted and the weather “fickle,” but there is no sense of how the ubiquitous computers and superfast international travel (two hours from L.A. to Beijing) are fueled. Oil seems to be over, although given the air pollution in Beijing, coal may still be going strong. Has power gone solar? It’s possible (Nick has spent some bad years doing tedious, underpaid, marriage-destroying work as a “digital pusher” for a company called SolTech). Maybe nuclear? (We get occasional mentions of radioactive contamination and waste, the biggest news story in the background of the action a conflict between America and Europe over their mountains of garbage as they attempt to secure dumping rights in what once was Antarctica.)

This absence, this taken-for-grantedness of the material basis and governments, might be read as a brilliant reflection of our own tendencies to neglect the physical foundations in favor of the distractions of cultural display (much as Larry and Nick’s immaturity at the opening might be read as expression and consequence of their all but infinitely mediated experience of the real). It is difficult, however, to be confident of this absence as intentional subtlety when the novel’s most explicit statement about the stakes makes no distinction between hair in the novel’s fictional time and oil in our own. As one of the chief players in the hair market says to Nick,

“Commodities control the world. In the past, the British fought a war for tea. Tulips were the rage for the Dutch. Oil drove most of the internecine Middle-East diplomacy in the early part of the century. Now, hair is the most precious of commodities.”

But one of these things is not like the others—tea, tulips, and hair depend for their high value on perception, convention, and a market in appearances. Oil is something other, more, for as long as it is necessary to drive the machine. And if in a world dependent on energy for its illusions, oil is over, then plutonium or whatever precious element supports the future’s solar cell must be the next great commodity, and the market value of hair, no matter how great, a step removed, as illusory as the hair itself.

This incongruity, of course, can be read as the foundational joke of Bald New World, with the laugh finally on us.

Nick is such a decent guy, so sympathetic in his hopes to recreate himself, to abandon the brutality of his family of origin, start fresh with a new name, make a new family with his wife, find a brother in Larry—there is something of Candide in his battered resilience. Even when stripped of everything he remains engaged in his own re-creation.

You want to wish him well—want to wish us all well, in our fumbling to find a way out of the cycles of violence and violation so vividly dramatized in his story and in this send-up of our collective present that Peter Tieryas Liu sends him travelling through.

Peter Tieryas Liu is the author of Watering Heaven and Dr. 2. He has been published in journals including Electric Literature, Evergreen Review, Gargoyle, Hobart, Indiana Review, New Letters, New Orleans Review, Toad Suck Review, and ZYZZYVA, and was the recipient of the 2012 Fiction Award from Mojo, the magazine run by Wichita State University. He has also worked as a technical writer for LucasArts, the gaming division of LucasFilm. You can follow his work at tieryas.wordpress.com. He lives in Los Angeles.

Catherine Gammon is the author of the novels Sorrow (2013, Braddock Avenue Books) and Isabel Out of the Rain (1991, Mercury House). She is a Soto Zen priest in the lineage of Shunryu Suzuki Roshi and is living in Massachusetts. More information at Braddock Avenue Books and http://catherinegammon.wordpress.com/.