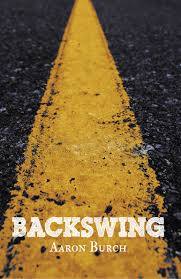 In Backswing, Aaron Burch’s wonderful full-length story collection debut, we enter a world of lost young men. They exist in limbo, questioning, unwilling or unable to make a complete transition into settled lives. They are baffled by a world that seems both infinite and empty. They love, but they are unsure of themselves and what love really means. They seek. They run toward distant objects for no other reason than to escape where they are. They drift, unconnected to their communities, unclaimed by faith or careers. Many are haunted by their pasts, histories unshared that have turned into deeply personal myths. The characters we meet aren’t victims or whiners; indeed, quite the opposite. They are strong in a quiet way, unafraid to stare into the mirror or the abyss.

A number of the stories in Backswing blur the lines of realism and fantasy, and Burch deftly delivers us into haunting—and haunted—worlds. A woman performs a magic trick for her boyfriend, chatting as she lays herself open in both body and thought. A boy wakes to find a zipper on his chest, a covering for his confused, adolescent heart. A man enters his dreams, challenging the nightmares that trouble him. Another man eats a van piece by piece while his small town watches. These stories are told with a lyrical restraint that heightens what is already surreal, and I was left feeling the way I often do after reading Kafka—that this world’s most disturbing nightmares exist just beneath the surface of the familiar. The themes of the surreal and the hidden are illustrated in “Prestidigitation” in a scene between a man and his magician girlfriend:

Roy has been trying for the last few months to get Linda to show him a trick, to share a secret or two, but she always refuses. Once I show you, she’ll say, there’s no intrigue. The worst thing you can do is fulfill a curiosity. It never lives up, is always a letdown. Magic. Life. I gotta keep you guessing. She’ll smile, like she’s teasing, but only in part.

I had read a number of Burch’s stories before, but there is a difference between reading piecemeal and sitting down with an entire collection. Collections are, by nature, fragmented creations, and giving an overriding mood and tone to a book of stories is a difficult task, but when it’s accomplished, the pieces are elevated from single voices to a greater chorus. Burch achieves this—and the feel of the book lingers in much the same way an engrossing novel does, a haunting of one’s thoughts, an impression that remains like the smoke that flavors the dark after the last firecracker has popped. What does Burch leave us with? A world where reality is skewed and violence is expected—and accepted. A world where answers usually lead to more disturbing questions, where love is a mystery, and our graceless stumbles toward it only show our vulnerabilities.

Burch’s style is tight and commanding. Back stories are delivered with quick, deft strokes. Images and emotions are expertly handled and compellingly framed. In the opening sentences of “The Apartment” Burch creates a space which drips with the melancholy of an all-day rain, a mood perfectly suited for the story that follows—

The sky is solid dark gray. Overcast, dreary, it bleeds down from the sky, covering everything. It would seem depressing, but it’s been like this so many days in row that it doesn’t really feel like anything anymore.

We travel deep into these characters, yet Burch doesn’t pass judgment. His characters are exposed, and the truth, if it’s there, waits in our perception. These stories flow with an admirable rhythm, a hushed urgency that takes the time to present vivid details without sacrificing momentum. Consider this succinct bit of compression to handle the passage of time in a character’s life:

After a month in the new house, it feels alternately smaller and bigger than the house they left in Washington, the only house Ben had lived in before his dad got a job outside Chicago and moved them east without so much as asking Ben if he had an opinion. Both more claustrophobic and big enough to get lost in, depending on the variety of depressed Ben wants to feel at any given time. The neighborhood is nicer, which is how his parents say that it is newer and more expensive.

A month passes, yes, and a boy gets more accustomed to his new neighborhood, but so much more is accomplished in this passage. We see the boy’s struggles, his insecurities; we gaze into his perceptions. This is lean writing—purposeful and direct, its restraint only adding to its power.

There is blood in these stories—body parts are severed, a hand, a finger; teeth are dislodged—but the violence is by no means gratuitous. True, these passages and others made me squirm, but only in the best of ways. They grounded me to Burch’s world, its grittiness, its message that even though his characters may be lost, there is still much at stake, and that they are willing to sacrifice themselves in order to achieve the elusive gift of connection.

After I was done reading, I tried to start another book, but I couldn’t, not just yet. Burch’s characters and images still roamed my thoughts, ghosts who demanded a little more of my time. What better experience can a reader have than that?

Aaron Burch is the editor of HOBART: another literary journal, and the author of the novella, How to Predict the Weather and How to Take Yourself Apart, How to Make Yourself Anew, the winner of PANK’s First Chapbook Competition. Recent stories have appeared or are forthcoming in Barrelhouse, New York Tyrant, Unsaid, elimae and others.