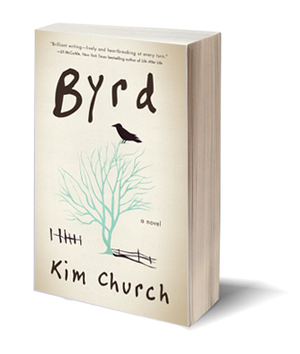 Kim Church’s novel Byrd chronicles the life of a woman, Addie, who chooses to give her son up for adoption after she is left with an unwanted pregnancy. The book provides a meditative inner monologue addressed to her biological child. Addie starts the story off with a letter to her son, recalling the night she broke the news to his biological father. Letters to him are sprinkled throughout the novel. The rest of the novel, written in third person omniscient, explores and compares the lives of Addie, her family and friends, and Roland, the biological father of Byrd.

Roland lives his life through music, and readers with a similar passion will appreciate this main motif in the book. From early on, music is the main way that Roland expresses himself. When he is a teenager, he plays for the adolescent Addie in his basement. They explore each other sexually during that time, but eventually Roland leaves her for another girl.

Not only is music Roland’s main occupation during and after high school, but also his coping mechanism. The day Addie is scheduled to have an abortion, Roland reminisces about Jack Kerouac’s unnamed girlfriend who also has one. Kerouac, he tells us, “wrote about her in Desolation Angels”. Roland writes a song as a tribute to Addie with the same title. Music is his art, just like reading is Addie’s main source of entertainment.

Church gives the reader a glimpse of Addie’s internal imagery, her own way of coping, while Addie waits for the doctor to perform the abortion:

She is on a table and a nurse comes in and rubs warm Vaseline on her belly and glides a camera over her. ‘Show me’ she says and the nurse points to a spot on a black and white TV screen. The spot is gray and smaller than a baby bird. Which is how Addie tries to think of him in the beginning: as a bird, something that doesn’t belong in her, a mistake, all blind and grey and no feathers. She wonders what others see when they look at the screen, what images they conjure up to fool themselves.

Fittingly, there is a subtle music reference in this scene—a reminder of Courtney Love’s pregnancy and her decision with Kurt Cobain to name their child Francis Bean Cobain after deciding she looked like a bean on the ultra sound.

Nonetheless, the abortion fails. When Addie returns to the clinic for a checkup, she finds that the doctor did not take the baby out. No longer trusting this first doctor, Addie seeks medical help from a different doctor. Already too far along, she decides to carry her pregnancy to term but give the child up for adoption, thus creating the premise of the book.

Church has a fantastic unorthodox style. The letters mixed in with the narrative provide a fresh and entertaining read. Something else very impressive about Church’s writing is her characterization. Byrd exposes the reader to such a diverse set of characters; there is no one that Church forgets to fully introduce. Even Elle, the woman who marries Roland and provides a foil for Addie’s character. Eventually, the reader comes to understand her and her major life story even though she is the rival of our heroine. By doing this, Church reminds us that all human beings have a story that shapes the way they interact with others.

Byrd is a book for people, like this reader, who have moved away from the south and miss it. The novel is filled with descriptions of the south, especially when the story starts out in Carswell. From dust on the road, to the old architecture of the bookstore Addie works in, to the tree Addie plays under as a child and where she almost chokes after her brother splashes her in the pool. The most delicious illustration of southern culture is when Pet, Roland’s mother, refuses to offer Addie something to drink when she walks a long way in the sticky humidity to his house. In the south, especially in the spring or summer, it is considered ill-form to not offer your guest something to drink.

Ultimately, Byrd presents a nontragic, even undramatic perspective on what it is like to give a child up for adoption. There is nothing preachy or political in this novel. Church does not cast Addie out to be a traumatized victim or a promiscuous woman who is ‘punished’ with a pregnancy. Rather, Church has created an intelligent, multifaceted person—a brave woman—that the reader is grateful to have become acquainted with.

Born in Lexington, North Carolina, Kim Church earned her B.A. in English from the University of North Carolina at Greensboro and her law degree from UNC-Chapel Hill. She lives with her husband, artist Anthony Ulinski, in Raleigh, where she divides her time between writing and law. Visit her online at www.kimchurch.com.

Anna Stusser’s work is featured in The ARDOR blog, Brown University’s Bluestockings Magazine, Loco Magazine, The Siren (in the UK) and The Squawk Back. In the summer of 2013, she won the National Blueberry Month Photography Contest from Little Brown and Co on Instagram. She is a reader for One Throne Magazine. Follow her on twitter @AnnaStusser .