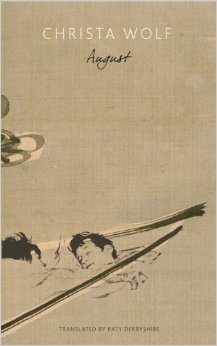 Memory plays a significant role in the books of German writer Christa Wolf (1929 – 2011). Much of her often autobiographical work deals with queries to a younger self, or a younger country. Even her Greek novels Cassandra and Medea, in their bold re-telling of ancient stories, subtly investigate and play with the collective memories readers have of traditional tales. And more explicitly, her 1976 novel Patterns of Childhood is a fictionalized account of her growing up in Nazi Germany. The book is rooted in a specific time, and one of great historical import, but it very much deals with the multiple and difficult questions of how a person looks back across a lifetime, how a person investigates memory and the past and their relationships to the self.

The final scenes of Patterns of Childhood deal with Wolf’s stay in a tuberculosis hospital in the winter of 1946-47, and it is these moments she returns to—from a completely different perspective—in the very last piece of fiction she ever wrote, an extremely slender novella entitled August, which was published in German in 2012 and just released this winter by Seagull Books in Katy Derbyshire’s English translation.

August opens with the words, “August is remembering.” And this very simple sentence (the present tense of it absolutely perfect) directs the reader toward a series of tender meditations on this man’s early life. That word tender seems strange when the first memory called up is about the loss of his mother during a bombing raid on a refugee train, about a difficult conversation with a woman from the Red Cross and 8-year-old August’s medical exam and subsequent removal to a tuberculosis hospital. But despite the implied horror of these events, August’s tone is tender. Perhaps it is the distance Wolf gives him, 60 years in the future, or perhaps it is the life she has given him—a life mostly only hinted about—to fill those 60 years.

Alongside the careful tenderness in August’s tone there is also a feeling of resignation, and a cautious sorrow. Now a widower, now ready for retirement, now a man with plenty of time to be quiet and alone with his own thoughts—August fits the mold for the kind of memory piece that has even become a genre: an older man looking back upon his life and revisiting its twists and turns, its more difficult questions. But August isn’t interested in understanding anything. And this is the key. August simply wants to look at it again. To feel it all again. To peer through the windows of his mind and see the people and the objects of this particular and short period of his life.

The narrator—a favorite of mine, a 3rd person limited so deeply connected to its subject it very often feels like it is masquerading as a 1st—tells us that August has always wanted this kind of dramatic retelling:

They usually spent their holidays on their balcony, which Trude had lovingly transformed into an oasis of blossoms. When they sat there drinking coffee in the afternoon and eating home-baked cake and he showed her how satisfied he was, she might have said he really didn’t ask much. He’s had a good life; no one can tell him otherwise. August doesn’t know whether he’s changed since he was a child but he remembers very well that Lilo once said to him: You can’t get enough, can you?

It was true. No matter what she did, whether she sang to the children, told fairy tales or recited poems, August couldn’t get enough. He begged and pleaded her to recite his favourite poem again so he could again feel that shudder at the last line: “The child in his arms finds he motionless, dead.”

Thus, very gently, Wolf connects August’s childhood desire for the vivid emotional impact of watching stories to his memory exercise that frames the short novel. It becomes a clue, a way to understand this man who lost everything when he was eight, whose own history was almost completely erased, but who went on in his quiet way to find satisfaction in story memory, of his own and those he’s been told. It is also a clue as to why August, from his present moment in time, characterized by his widowhood and its feeling of loss, is going backward to a previous moment of another great loss. Grief tactics can be re-learned.

The passage above is also typical of the way in which Wolf directs the reader between the book’s two time periods. There is no space, no signal nor set-up, August’s mind simply glides from one to the other, sometimes even mid-thought. But this feels wonderfully true-to-life. The thresholds between the past and the present are never fixed, and the self is a constant time-traveler.

This, I think, is the most elegant and meaningful element of August. While parts of his story are extraordinary, especially for readers of a different generation and nationality: the loss of his parents, the war, his time in hospital with the “moths” in his lungs, the death of children around him—these are exceptional memories, and yet the rest of his story is so delightfully ordinary. So uneventful. Here is an unexceptional figure. Just like the reader. Like us. We all know exactly what it feels like to be this kind of traveler—without so much as disturbing the calm surface of an ordinary day, we are revisiting other moments, other places. Like August, we are feeling the shudder of our memory’s sensory archives as we allow ourselves to re-experience them.

Christa Wolf was one of Germany’s most celebrated post-war writers. She grew up during Nazi rule and spent most of her adulthood in communist East Germany, where she increasingly came to question ideologies through her writing. In 1989, she was an instrumental figure in the protests leading to the fall of the Berlin Wall. Her work was always innovative and challenging in terms of style and politics, including the ground-breaking Cassandra, Patterns of Childhood and The Quest for Christa T. Her last novel, City of Angels, dealt with her stay in Los Angeles during the fallout from revelations that she had been an informal collaborator with the Stasi in younger years, and naturally been spied upon for a significantly longer period. She has been awarded many prizes, among them the Büchner Prize of the German Academy of Language and Poetry (1980), the Austrian State Prize for European Literature (1985) and the Geschwister-Scholl-Prize of the city of Munich (1987). Christa Wolf died in Berlin in 2011.

Katy Derbyshire is a London-born translator, who has lived in Berlin for many years. She focuses on contemporary German-language writers, including Inka Parei, Dorothee Elmiger, Clemens Meyer, Simon Urban, Sibylle Lewitscharoff and Tilman Rammstedt. She has translated Inka Parei’s Shadow-Boxing Woman (2011) and What Darkness Was (2012) as well as Dorothee Elmiger’s Invitation to the Bold of Heart (2011). Her translation of Tilman Rammstedt’s King of China is forthcoming from Seagull Books.

Michelle Bailat-Jones is a writer and translator living in Switzerland. Her fiction, translations and reviews have appeared in various journals, including The Kenyon Review, Hayden’s Ferry Review, The Quarterly Conversation, Spolia, PANK and Two Serious Ladies. Her translation of C.F. Ramuz’s modernist Swiss classic, Beauty on Earth, was published in 2013 by Onesuch Press. She is the Reviews Editor here at Necessary Fiction.