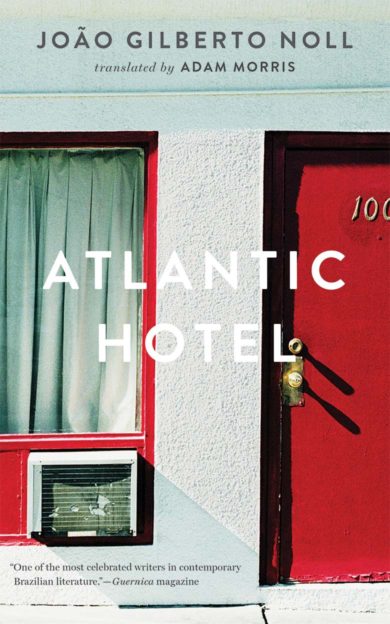 João Gilberto Noll died this March at the age of 70. Widely known (at least for a writer of fiction) in his native Brazil, Noll’s reputation is only beginning to be made in the Anglophone world. Two Lines Press has just published a translation of his 1989 novel Hotel Atlântico. That book, along with a novella, Quiet Creature on the Corner, are the extent of his presence on the English market. Adam Morris has served as translator in both instances. Beyond that, a galaxy of questions swirls about his work and what it means.

Atlantic Hotel is a book of mists, sudden rainshowers, and cold sunlight, the friction of weakened and disabled bodies in shabby rooms. The narrator relates an erratic journey from Rio de Janeiro to Porto Alegre. On his way, he witnesses the deaths of three people under various circumstances. He has casual sex with two others but refuses, because of depression and fatigue, to use the services of a prostitute. His body deteriorates. His clothes rot on his body. The eponymous seaside hotel looms as the final terminus.

Quite naturally, the narrator is mistaken for a telenovela actor. He encourages the association, even when it places him in mortal danger. He feeds the people around him lines. He takes roles as the situation demands— a priest, a blind man, a political martyr—his identity is as malleable as the situations surrounding him.

The anticipation of death animates the narrator’s lies, his seductions. The novel begins with a body being taken on a gurney from a hotel in Rio. The sight elicits giddy laughter. It leads him to proposition the girl working the front desk:

Someday I’ll end up in a coffin, too—so I took the girl’s hand as soon as I stopped laughing and kissed it. With her hand still in mind, she slackened her face, as if a gesture like a kiss on the hand were completely commonplace and even natural at a hotel reception desk. Her long expression opened into a faint smile: “Would you like to speak with a guest, sir, or would you like a room.”

He tells the clerk a story about having arrived from the airport. He has done no such thing. Later, they have sex “on all fours atop the filthy green carpet” of his room. Other than a certain copacetic mood, there is no intimacy between them. “No touching above the waist, just anonymous haunches seeking each other out pathetically.”

As the passage above might suggest, the question of misogyny hangs over Noll’s work, this novel as well as Quiet Creature on the Corner. The plot of the latter is set in motion by the rape of the narrator’s girlfriend Glória. There is no motive given for the assault, no contrition on the part of the perpetrator, no justice meted. And while Atlantic Hotel has nothing at that level of sexual violence, the ease with which women offer themselves raises questions about what is being intended here. In general, Noll’s fiction displays an unwillingness to make judgments about the actions that take place within them. The question remains as to why.

The icy answer is that this fictional amoralism has its analogue in real world injustice. There is an assumption that, categorically, perpetrators of violence are burdened by their actions, that liars live in constant fear of exposure. Recent political events in the United States have given the lie to this sort of folk belief. It bears pointing out that Brazil has its own parallel history of slavery, colonization, labor, and sexual exploitation. These topics gain rather than diminish in Noll’s oblique treatment of them.

But while the apparent nihilism of Atlantic Hotel is bracing, it also conveys a certain innocence, even a tenderness. Because Noll’s characters are capable of anything, their displays of compassion are particularly striking. There is a kind of divine grace operating, a free and unmerited favor given and received.

While traveling on a bus, the narrator sits beside a beautiful American woman. She confides to him about her divorce, the loss of a child. She relates the pride she feels working as an archeologist in the Brazilian interior. After introducing themselves, they naturally fall into an intimacy that transcends the need for verbal communication or sexual contact:

We went hours without talking. When a beautiful sunset began to take shape, something came to my lips—I don’t even know what. I did make out her response: she didn’t think so.

We remained silent for another half hour. Suddenly, she said it was getting dark. Then, running a hand through her hair, she said this time of day always devastated her. A knot in her throat that formed only as night fell.

The woman’s subsequent death, by suicide, is shocking but expected. She takes an overdose of pills while the narrator is sleeping. Later, he reads her obituary in the newspaper. The article mentions the death of the child but not her work as an archeologist. Was that really her profession? Her story has every indication of being as false as the narrator’s. Perhaps that is why they could connect so fully.

Noll’s fiction is one of slippages, some poignant, some terrifying: “When a beautiful sunset began to take shape, something came to my lips—I don’t even know what. I did make out her response: she didn’t think so.” How bizarre and perfectly normal is it to lose track one’s thoughts this way? To lose track of one’s speech? One’s life? Someday we will all end up in a coffin. Noll shows us how every act of intimacy, every act of violence, acts as a prelude to that fate, as well as the lovely vicissitudes that happen in the meantime.

João Gilberto Noll (1946–2017) is the author of nearly twenty books. His work appeared in Brazil’s leading periodicals, and he was a guest of the Rockefeller Foundation, King’s College London, and the University of California at Berkeley, as well as a Guggenheim Fellow. A five-time recipient of the Prêmio Jabuti, and the recipient of more than ten awards in all, he died in Porto Alegre, Brazil, at the age of 70.

Adam Morris has a PhD in Latin American Literature from Stanford University and is the recipient of the 2012 Susan Sontag Foundation Prize in literary translation. He is the translator of João Gilberto Noll’s Atlantic Hotel (Two Lines Press, 2017) and Quiet Creature on the Corner (Two Lines Press, 2016), and Hilda Hilst’s With My Dog-Eyes (Melville House Books, 2014). His writing and translations have been published widely, including in BOMB magazine, the Los Angeles Review of Books, and many others. He lives in San Francisco.

Matthew Spencer lives and writes in Washington State. There is a rose bush outside his office window.