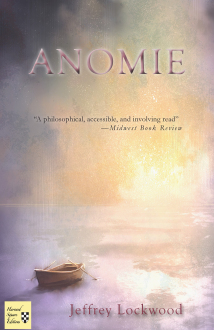 Jeff Lockwood’s novel Anomie opens with a mini parable about parable-telling. The page-long “prologue” shows Michael, the book’s protagonist, as a young boy, cocooned in his father’s arms and listening to the “story of Gookoosh” (a tale from his father’s Anishinaabe ancestry, an Indian people native to the Great Lakes region). His mother observes the scene from the kitchen, quietly lamenting that these stories may be lost forever, since the father refuses to be recorded on tape.

The compact scene both establishes the book’s central theme of storytelling, and foreshadows its main narrative. In the following chapter, the story flashes forward to a middle-aged Michael who has left America to travel around China (that “very strange place”). Recuperating from a series of personal tragedies, big and small, his hope is that an unfamiliar world will help reset his orientation and inspire some semblance of a renewed balance.

“If [Michael] could write one piece, just one piece that for him was a clean and honest self-expression,” the text reads. “It would be worth the agony of the past few years.”

In China, Michael subsists on low-stress English teaching gigs, indulges in baiju (a strong Chinese liquor) and dalliances with younger Chinese students, all while struggling to write his honest story. Interweaved with this “present” narrative are flashback sequences that gradually fill in the picture of Michael’s troubled past: his botched Fulbright scholarship experience in Ukraine; a broader falling out with American academia, which he finds revoltingly self-aggrandizing; the mysterious death and estrangement of his loved ones.

While the story at first appears rather straightforward, Lockwood complicates the narrative with a smattering of peculiar meta-references. A line from the first chapter reads: “Detached and alone in his head, Michael’s own story was being continuously narrated in the third person omniscient.” Exchanges between Michael and Loch, one of his few close friends and a fellow disgruntled academic, more explicitly hint at this connection. While musing about potential story ideas, Michael tells Loch: “I’d rather the protagonist not be a hero, but a loser… [his goal] is identity.” Later in the book, after Michael shares a rough draft of his story, Loch replies via email: “Instead of Indian Time, mate, why don’t you call it Anomie?”

These references imply that the narrator represents Michael writing about himself in the third-person. Building on the book’s central theme of storytelling, this unusual narrative dynamic reflects the tradition’s inherent complexities: that the story being told is inevitably intertwined with the storyteller. “He was lost in his own abstraction,” Lockwood writes in one passage, referring to Michael, but in a way describing himself.

Sometimes the experiment slips into digressions that neglect or contradict Lockwood’s self-imposed meta-construct. One chapter near the middle of the book recounts in detail the relationship between Li Qin, one of Michael’s student-girlfriends, and her relationship with a young British boy. The sequence presumes the lens of a true omniscient third-person narrator, providing specific details and psychological insights into what both characters were doing and feeling at different points throughout their relationship. Although it is a compelling (and ultimately heart-wrenching) sub-plot, the chapter violates the limited perspective of Lockwood’s unique third-person narrator, which is supposed to be an extension of Michael’s point-of-view.

Beyond such narrative inconsistencies, Lockwood’s muddled conceit is particularly disappointing because the book’s most vivid scenes involve Michael’s on-the-ground dispatches about what China looks like through his western, baby-boomer eyes. He learns that foreign teachers from America or Western Europe are often stigmatized in China as members of the “Loser, Boozer and Cruiser Social Club.” Chinese provincial governments prohibit all teachers from speaking about the “three Ts” (Tibet, Taiwan and Tiananmen Square), and first-year university students seemingly possess the maturity level of American middle-school students (“America, it seemed to [Michael], had grown up too quickly”).

These fascinating perspectives are made even more complex by Michael’s dormant Anishinaabe heritage, which he had long abandoned since childhood, but finds himself re-discovering throughout his travels in China. Many of the book’s flashback sequences include childhood memories where Michael felt coerced into a twisted kind of cultural assimilation. Following the guidance of teachers and counselors, he would alternately play up his “white” persona to fit in with classmates, and his Native American ancestry to receive special academic treatment or recognition.

Lockwood’s playful, self-referential narration is a noble attempt at reflecting the unavoidably personal and biased viewpoint inherent to all storytelling. But rather than cloud the narrative lens with meta-fictional artifice, the book could have benefited by instead removing all constructs. Anomie feels like nothing short of Lockwood’s magnum opus, revealing all that he has seen and learned throughout his time and travels around the world. Pouring his story onto the blank white page, he obviously wants to provide readers with a peek inside his head. Why not bring them in even closer?

Jeffrey Lockwood hails from Michigan’s Upper Peninsula, and is a member of the Chippewa tribe there. He is the author of In These Low Mountains (March Street Press), a chapbook of poems and short stories, and has several other published poems and short stories in print. Jeff has lived internationally for many years, as a soldier, Fulbright Scholar, Peace Corps volunteer, and teacher. Presently, he writes in Inner Mongolia. Anomie is his first novel.

Matt King is a freelance writer based in New York. His nonfiction has appeared in The Atlantic, Quartz, USA Today, The Daily Dot, and various literary magazines.