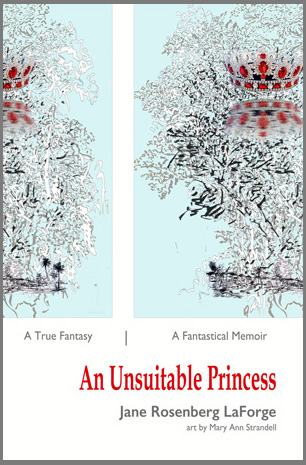 Growing up in Los Angeles can’t be easy. Between realistic catastrophes, like fires and earthquakes, and the unreal but no less alarming dramas offered by the entertainment industry, it can be hard to stay in touch with ordinary reality. In An Unsuitable Princess, Jane Rosenberg LaForge, a Los Angeles native, combines imaginative narrative and personal memoir to show how her own coming-of-age was warped by her hometown’s peculiarities, particularly the constant, confusing mashup of glittering fantasy with the complex urban reality that, ironically, provides the fantasy with vital context and support.

An Unsuitable Princess consists of two interwoven stories: a memoir-like evocation of an awkward girl who, growing up in 1970s Los Angeles, suffers the usual indignities of adolescence against the confusing backdrop of Hollywood in the immediate post-Vietnam period; and a nostalgic renaissance-faire-style fantasy involving a parallel but idealized figure, a mute damsel with mysterious healing powers and a special bond with horses.

One solution to the narrative problem posed by parallel stories is to integrate the two. Lately, this has meant thrusting the fantasy narrative into a smaller, more contained world within the larger story, subordinating one to the other. Both Adam Ross’s Mr. Peanut (2010) and Ernest Cline’s Ready Player One (2011), to take two recent examples, integrated stories from the main characters’ video game experiences into overarching, otherwise realistic narrative frameworks. Though An Unsuitable Princess involves balancing two storylines, one real and the other fantasy, LaForge’s book doesn’t work this way. By refusing to subordinate one of her two parallel stories to the other, LaForge takes on a far riskier and more difficult narrative task, one that she pulls off with style and wit.

Perhaps because she knows she is offering readers the equivalent of a high-wire act, LaForge wisely plaits her two stories together simply, by alternating episodes from each one. At first, the two narratives—the memoir and the fantasy—seem quite separate. When they overlap, the connection is abstract, not much more than an echo. For instance, LaForge’s adolescent equestrianism shows up in the fantasy narrative as the heroine’s gentle caretaking of an injured horse. Later, when the teen-aged narrator attends her first Renaissance Faire, the stories begin to intersect, and the connections become correspondingly more obvious and concrete. Throughout, however, the structure alone provides much of the suspense: When will the stories diverge catastrophically? When will the narration slip?

The relationship between the two narrative strands is clear enough. The fantasy narrative provides the awkward teen-aged subject of the memoir with a much-needed escape and compensates for her miseries. But LaForge doesn’t leave this relationship unexamined. That the narrator should require such an escape is, itself, a point of departure for some trenchant criticism, particularly of the LA school system’s use of “tracking.” This divisive system shunts some students, identified according to whatever flawed criteria, out of intellectually rigorous courses and into boring vocational classes that fail to address the students’ need for the frameworks of understanding provided by literature and history. Looking back, LaForge wonders if her inability to come to reasonable terms with painful social stratifications “had something to do with the education I received”:

The gifted kids got to read A Separate Peace because of their profound ability to feel and articulate more; to me a gang war was just a gang war, but to them, it was an assault on their adolescence, or more rightly put, their innocence and childhood. They were rewarded for understanding they had a close connection to these people who were so different from them; a connection they made by virtue of all the esteem they had been fed about their essential humanity. Someone like myself did not deserve to be fussed over with fancy books and big ideas.

This painful restriction is not just a matter of reading special books. Rather, it is being exposed to the assumptions that support this kind of educational system that has the most damaging effect. This is something that no reading of A Separate Peace or any other bit of classic literature is likely to undo. LaForge shows how the damage extends even to her decisions as the teller of these two tales. She is well aware, for instance, of the problem posed by setting a fragile young woman with a disability at the center of her fantasy narrative. Readers either can’t or won’t identify with such a character. They demand spunk and pluck, aggressive self-assertion, a “kick-ass” heroine. LaForge reveals this demand to be an expression of privilege, in particular the privilege of not needing to be in touch with the reality that self-loathing still overwhelmingly dominates even privileged women’s inner lives:

Much has been made about the damage this romanticized image of handicapped women has done to gender relations and women’s liberation, but for me that flawed [character] was a much more practical role model […] for it was one that I, with all of my deformities and disabilities, had a realistic hope of someday emulating.

The keywords here are practical and realistic: LaForge offers this flawed heroine because it is these very flaws that allow her younger self to “relate” to the fantasy character, to take the character as a role model. Of course, the idea that readers should use fictional characters for identity support is problematic, not least because literature must do more than prop up a reader’s damaged narcissism. But then again, this is a coming-of-age story, a story about a person who is necessarily looking for someone to become.

Besides, LaForge is canny enough to distance herself from the needs of her younger self. “So there you have it,” LaForge announces, concluding her section on the shrinking violet stereotype, “proof at last, even at its most discursive, of the deleterious effects from gender stereotyping the mass media perpetuates; particularly on impressionable girls, dissuaded from the need to become powerful, self-sufficient feminists.” At this point, LaForge makes a canny shift, switching abruptly from this ironic reflection to the world of the seemingly so delicate heroine: “And yet,” muses an observer of this girl, “she is a font of knowledge: potions, roots, draughts, medicines, the magic that follows when alchemy fails.” Though she can’t speak for herself, her situation—examined closely—suggests that she feigns her weakness, like Hamlet, north-by-northwest: “She must be very intelligent, to have to act like such an imbecile before her betters.”

Writers are often told to simplify, in order to meet the needs of readers who supposedly want stories that unspool as smoothly as a California freeway. In An Unsuitable Princess, LaForge tests that assumption. The shifts between storylines are marked by stylized flowers reminiscent of the asterisks that, in more conventional prose, usually gesture toward a footnote, endnote, or some other apparatus of digression. By usual genre standards, even those of literary fiction, this approach should not work. LaForge’s decision to structure her book according to a more complex framework announces her faith in a different kind of storytelling and, by extension, a different and more complex set of imaginative possibilities. Her reflections on the kinds of characters required by mirror-hungry readers suggest a further faith, in readers who can look beyond certain narrow requirements for literature: that characters should be “relatable” or self-flattering, that plots should be linear and simple, that stories should do no more than entertain.

Jane Rosenberg LaForge’s poetry, fiction, critical and personal essays have appeared in numerous publications, including Poetry Quarterly, Wilderness House Literary Review, Ottawa Arts Review, Boston Literary Magazine, THRUSH, Ne’er-Do-Well Literary Magazine, and The Western Journal of Black Studies. Her full-length collection of poetry, With Apologies to Mick Jagger, Other Gods, and All Women was published in fall 2012 by The Aldrich Press. She is also the author of the chapbooks After Voices, published by Burning River of Cleveland in 2009, and Half-Life, from Big Table Publishing of Boston in 2010.

Diane Josefowicz’s fiction has appeared in Conjunctions, Fence, and the Saint Ann’s Review. She teaches in the undergraduate writing program at Boston University.