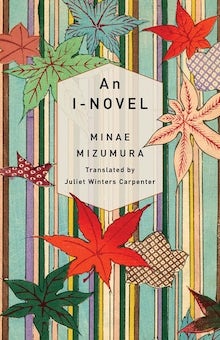 Minae Mizimura’s second novel, An I-Novel, is experimental: it is the first bilingual novel printed horizontally in Japanese. It follows a day in the life of Minae, a 30-some-year-old Ph.D. in French literature at an Ivy League school, who is holed up in an apartment rife with reminders of her ex-boyfriend. Her apartment is practically hermetically sealed; she almost never leaves, and when she does, she avoids interacting with others. She is almost done with her degree program, but she has put off her oral examinations indefinitely. Overcome by depression and anxiety about the future, she describes herself as “a mummy slowly desiccating in a spacious and elegant apartment where the radiator worked overtime.” Despite the bleak existence of its narrator, the semi-autobiographical novel’s formal innovations gesture at Minae’s eventual artistic triumph.

Minae spends this particular day in December on two long calls with her sister Nanae, a struggling sculptor who lives in SoHo. Nanae’s call in the morning is the impetus for Minae’s intense soul-searching in the novel. Nanae informs Minae that it has been exactly twenty years to the day since they first arrived in America from Japan. In the intervening years, their family has — in Minae’s own telling — unraveled, her father ailing in a nursing home with dementia, and her mother setting off to begin life anew in Singapore with a lover. Nanae’s news forces Minae to confront what she has avoided all this time: her desperate longing to return to a Japan she does not know and her longtime feelings of unbelonging in America.

“What had I been so afraid of? What was my problem? Why had I hidden myself away day after day in this brick apartment building, peering out on gray skies?” Minae is unabashedly pitiful. The confessional style of her writing grants her full leeway to mine memories from her childhood and adolescence for latent shame. Confident as a child in her family’s reassurances that they would soon move back to Japan, Minae resisted learning English for much of high school. And partially in response to suffering the daily indignities of orientalizing tropes, Minae conversely took pride in her own Japanese-ness, refusing to assimilate to American dispositions and trends as readily as her sister. The cumulative effect of these attitudes is Minae’s inurement to extreme social alienation and loneliness, an inurement obvious in her habits and patterns over the course of her day.

The drama in this novel, as in so many other novels, lies in the question: Will the protagonist-hero awaken from her prolonged stupor and seize the day? Or will it be physically impossible for her to regain momentum from a state of inertia? An I-Novel traipses circuitously through a day of decision in which Minae can choose to make her life her own or to further desiccate into a hapless victim of globalization. Her sense of entrapment in America also owes something to her family’s financial misfortune. The skyrocketing costs of living in Tokyo, paired with a poorly timed sale of their colonial-style house in Long Island, have made moving to Japan no small feat. Nevertheless, she can continue to be burdened by this personal history, or she can attempt to forge an entirely new path forward.

Sprinkled throughout are inklings of Minae’s dormant desire to write a novel. But there are stumbling blocks formidable enough to have prevented her from starting. A voracious reader of Japanese novels in adolescence, she desperately wants to write in Japanese like the Meiji-era novelist Natsume Sōseki. But her only experience writing in Japanese is penning a handful of long letters home. Even more prohibitively, she admits to her sister that she has no clue what she would even write about.

By the final page of the novel, Minae tells her sister her decision and steps into the world outside her apartment building for the first time in weeks. The symbolism of her exit from her apartment into the world is unambiguous. What interests me even more is how the novel’s formal experimentations testify to a futurity for Minae that lies outside the purview of the events of the novel. The left-to-right, English mixed with Japanese prose makes Minae a two-layered character: her existence as catalogued in An I-Novel may be pathetic, but the reader is ever aware of her eventual transcendence of those feelings of powerlessness. The later Minae will wield her bilingual fluency and psychological double-consciousness to render her experience artistically — a far cry from the younger Minae whose sense of uprootedness furnishes never-ending psychic injury.

The title of An I-Novel foreshadows much of what is dissatisfying about reading Mizimura’s novel in translation. The I-novel (shishōsetsu in Japanese) is a semi-autobiographical form that took shape in Japan near the end of the Meiji period. Conventionally, it focalizes the inner life of the narrator, whose existence is punctuated by events from the author’s own life. Therefore, Minae’s ultimate decision can be gleaned much earlier precisely because the novel is an I-novel. Mizimura has written an I-novel, so as readers, it would not be presumptuous for us to suspect that Minae will eventually succeed in writing a novel. Mizimura has spoken about what is missed by an English translation of An I-Novel: “the very impossibility of maintaining the bilingual form while translating the work into English, and the singularity of that impossibility, are clear testimony to the linguistic asymmetry we now face in this world.” The translator’s solution is to set the original English text in a distinct bold typeface. I found myself often translating the original Japanese text into Mandarin, which I grew up speaking, to attempt a simulation of the bilingual texture of the novel. Still, almost entirely in English, the monolingualism of the translation felt oppressive, even if this could not be helped.

Flipping through Juliet Winters Carpenter’s translator’s note — which constituted some of the most enthralling pages of the book — I found that the English title of Mizimura’s novel omits a whopping total of four English words from the original Japanese title. Consider Mizimura’s Japanese title: Shishōsetsu from Left to Right. It is an aptly bilingual statement that announces the two primary innovations of the novel. The novel should be read from left to right rather than the orthodox Japanese top to bottom, and it interlaces English and Japanese (with some French thrown in for good measure). The English-language title of An I-Novel is self-effacing, unassumingly situating the confessional novel within a storied Japanese literary genre. The elegant provocation of the title has literally been erased in translation. The redundancy of “An I-Novel from Left to Right” in English smacks of absurdist mockery — how else could sentences be read? — and alas, the Japanese-illiterate reader settles for the utterly humdrum compromise that is An I-Novel.

Mizimura’s reclamation of her creolized identity imbues her language with richness — a richness that is palpably and unavoidably missing in English translation. But now and then, perhaps it is a good thing for the monolingual English reader to be reminded of her own deprivation.

Minae Mizumura is one of Japan’s most respected novelists, acclaimed for her audacious experimentation and skillful storytelling. Three of her books, all of which won major literary awards in Japan, have been translated into English by Juliet Winters Carpenter: A True Novel (2013), The Fall of Language in the Age of English (Columbia, 2014; cotranslated with Mari Yoshihara), and Inheritance from Mother (2017).

Juliet Winters Carpenter is a prolific translator of Japanese literature. She received the Japan–U.S. Friendship Commission Prize for the Translation of Japanese Literature in 1980 for Abe Kobo’s Secret Rendezvous and in 2014 for Mizumura’s A True Novel.

Jasmine Liu is a writer and journalist from the San Francisco Bay Area. These days, she likes thinking about literature in translation, contemporary art, and classical music.