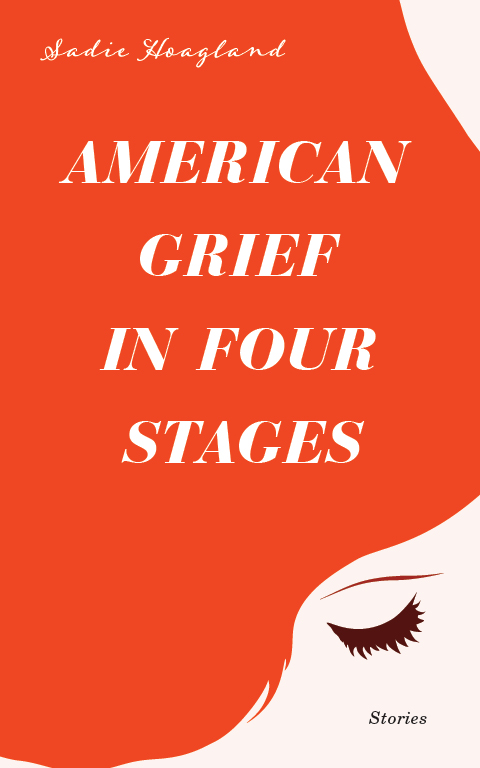 “It was my birthday when I found out that all the birds were electric,” the narrator proclaims in the first story of Sadie Hoagland’s collection, American Grief in Four Stages. This is indicative of the world Hoagland presents in these stories, one easily recognizable as our own, yet slightly bizarre — these strange details producing the exact feeling of being immersed in grief. Hoagland uses her stories as a place for experimentation, and she deeply understands grief and trauma. While portraying the loneliness of grief and the inability to connect and communicate through it, Hoagland writes with specific details that invite the reader to feel exactly what these characters are experiencing. As a result, this collection delivers a fresh look at how people live in the aftermath of loss.

Most of the stories in American Grief in Four Stages are told in the first-person point of view and focus on characters in the aftermath of a traumatic event. Suicide, drug overdose, effects of war, mental illness, cancer, fear of keeping a child safe are just some of the topics tackled in these stories. Which is to say there is a lot of pain and a lot of loss. These are stories perfectly suited to the short form — not giving the reader more of the trauma they can stand, and yet the characters are deeply known, even in these short spaces, because of the intimate and intense moments that are portrayed.

“Extra Patriotic” displays Hoagland’s precise and unsparing language that sparks strong emotion. In just a few sentences, the opening paragraph manages to make those fortunate enough not to have experienced the horrors of war and the subsequent homecoming, understand it.

What it felt like to him, was, at worst: when he was in the Walmart parking lot with his mother, he wanted to tear his skin from his body and walk around, muscle, tissue, half a skeletal face bared because he had seen these things, people without skin, and felt that other people should too. Other Americans. At best: it felt to him like he’d already done this. And then he’d stitched his skin back on a little too tight, crooked stitches running vertical down the middle of the back of his legs, his arms, itching.

In “Frog Prince,” a woman remembers her best friend, who, in struggling with accepting his sexuality, eventually overdoses. The last time she sees him, she urges him to come home with her to take a bath and sleep in a warm bed. “As if we could outrun our own nightmares” she reflects as she watches him walk away. Hoagland’s characters don’t outrun any of their nightmares and instead must face them.

The death of a parent has been written about countless times, but “In July Flags are Everywhere” is a notable story on this subject. Hoagland creates a world where grandparents are drafted into a war. When the government sends men to notify the families of deaths, they deliver bloody, raw steaks that they wrap in pieces of the American flag. It is a strange image that’s hard to shake throughout the entire story, a reminder that all is not well in this world, but at the end of the story, the image is transformed. In this story Hoagland explores what it is like to face the death of parents, how life both stops and goes on at the same time, and how remembering can facilitate healing. This extraordinary story, and the entire collection, vividly and uniquely captures the aftershocks of loss.

Hoagland is adept at showing the minuscule and almost imperceptible ways that life changes after a traumatic event. In “American Grief in Four Stages,” a girl helps her father clear out her murdered sister’s belongings at the dump, a trip they have made many times under better circumstances:

He stared at it once we unloaded, then slammed the bed door shut. The sound rattled and the seagulls cried. There was no talk on the way home, no, Can you believe someone would throw this stuff away? I mean, a perfectly good stove, just sitting there. There was not even any Willie Nelson, no “On the Road Again,” or us singing along with exaggerated twangs, just radio static with now and then a faint voice coming in, stuttered enthusiasm for traffic, weather, hourly contests.

“Father/Writer” deals with a more indirect form of loss as a dad attempts to keep the fear of possible catastrophe under control now that he counts his life by the passing days of his child and how that passage of time both lulls him into a feeling of safety and alarms him:

He stared into the empty daylight and felt those old waves again, a flare of anger, like he was being woken from a dream. First, he directed it at the strange car backing out of his driveway, the friendly goodbye honk. He fumbled with his gardening shears, letting them drop to his side. Maybe it was the way she’d said, Roses again? Like he was an old man.

The stories that are most successful in this collection are the ones that make full use of this mix of real and surreal elements. A few of the stories such as “The Crossword” and “Fucking Aztecs” are interesting in what they do with form and time but not as deeply felt because the characters lack the specificity seen in the other stories.

The stories in American Grief in Four Stages will break the heart open into a million pieces. It is impossible to outrun nightmares, and it is so easy to hurt and to be hurt in this world, like the character who describes trapping a spider in a glass: “It was so easy it was depressing, she tipped the glass so it was upside down and he was caught. She left him there, and the next day he was dead, long legs folded in.” There’s so much in these stories that signify the opposite of hope, and yet there is some hope. This remarkable collection, capturing all these varied experiences of loss and grief, ends up providing a shared language and understanding.

Sadie Hoagland is an assistant professor of English at the University of Louisiana at Lafayette and the former editor of Quarterly West. Her work has appeared in Alice Blue Review, The Black Herald, Mikrokosmos Journal, South Dakota Review, Sakura Review, Grist, Oyez Review, Passages North, Five Points, The Fabulist, and elsewhere. Learn more at sadiehoagland.com.

Emily Webber has published fiction, essays, and reviews in the Ploughshares Blog, The Writer magazine, Five Points, Split Lip Magazine, Brevity, Mom Egg Review, and elsewhere. She’s the author of a chapbook of flash fiction, Macerated, from Paper Nautilus Press. You can read more at www.emilyannwebber.com.
Share This