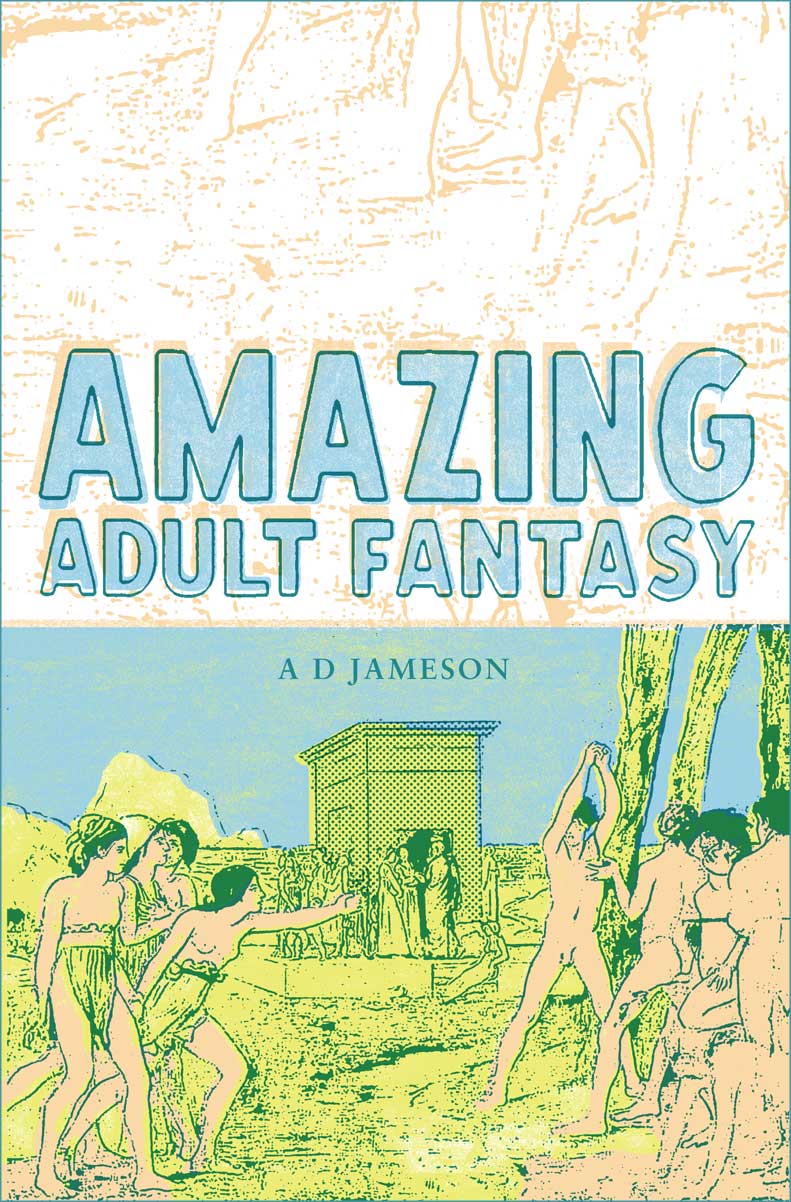 The artist statement of sorts, “Fiction”, that begins the first half of the stories in A.D. Jameson’s Amazing Adult Fantasy, teaches us how to read the entire collection: we’re told that we’re reading a book that’s been lost in a fire, that the book we’re reading doesn’t exist. A better metaphor for childhood, the gratuitous fiction of how we remember it, might not exist either.

Untrustworthy narrators guide us through these first stories, as familiar characters perform un-self-conscious, transition-less mutations: Snuffy, in “Bird Bird and Snuffy,” is a feared, retired barber, frozen in ice, who becomes Scruffy, a cute guy, then Shuffy, a foe of two bear characters (who were previously referred to as brothers), who then becomes Stuffy, who will marry the character who thought Scruffy was a cute guy, and finally he becomes Snuffy again, brought back together with Big Bird, who died twice in a previous paragraph, once from a star crashing down upon him, though he’s now been raised from the grave by a similar experience. On first reading these stories, it’s difficult to refrain from diagramming character relationships, sketching timelines of events, or even writing in the margins: “Isn’t s/he supposed to be legless?” Whether these mutations are a result of Bacteria X (in “Ota Benga Episode Guide: Season 3” this substance transforms a Congolese pygmy into a jungle bear, for instance) or because they mimic the plotlines of the tales and films and television shows we consumed in our youth, doesn’t matter in these stories told through the warped filter of nostalgia.

There’s plenty of stories in the world that wallow in a kind of slick, gilded throwback to childhood pursuits and desires—and they have nothing in common with Amazing Adult Fantasy. Maybe it was Longinus who complained first: “the genius of the present age is wasted by that indifference which with a few exceptions runs through the whole of life.” (On the Sublime) What’s special about Jameson is that he’s incapable of indifference, and the stories in this book feel as if they were so goddamn fun to write: handsome Riker of Star Trek Next Generation, who I’ve always had a tendre for, boasts of the number of tacks he can fit in his mouth; C3PO feels abandoned “like the ghost of a grocer pimp”; in “Oscar the Grouch,” the lovable curmudgeon we only thought we knew steals women’s bikinis and has published a terribly reviewed first chapbook small nasty words, or was it his critically praised first chapbook small nasty worms?

The second half of the book, “Solar Stories,” includes rewritten, mutated histories, told through the lens of a kind of brooding, questioning adolescence. The characters in these tales attempt to understand themselves as they, for instance, try to destroy NASA. These stories have in them the struggle of those uncertain years, when we begin to realize how much we will be let down by the world, as in “Moon Rock” when the author of the book Journey to the Center of the Moon writes, “Astronauts went to the moon, so what? They came right back again. They didn’t find cures for cancer or eternal youth.” The narrator begins this story, “When I was a child I talked toward the moon because it’s there…I was wasting my time; the moon is dead.”

But like remnants of DNA that can’t be bred away, the whimsy flits back in; after all, it’s Buzz Aldwin, not Buzz Aldrin, who wonders when he lands on the moon, “Why is it not so hot?” because “the Apollo mission was supposed to go to the sun and not the moon”; a Congolese pygmy exhibit emerges in the solar story “Neal Keaton,” harkening back to “Ota Benga” and Jessica Webb, who is the star of a film in the first half’s “7 Movie Reviews,” will become Jessica Webb who becomes Melanie Kingston who becomes Jessica Webb who will pledge her troth to Buzz in the second half’s “Buzz Aldwin.”

Even as all of this is going on, there are bursts of exquisite language and poignant moments: Neal, a young boy in “Neal Keaton,” mails postcards to himself from his dead parents; and in “Korawik Wattanakul” we read:

Nature is big; it has room for a great many things—absurd things like snot, and sane plants that grow in the dirt, like apples and coffee. It has coins and good places to put them: under hesitant, heavy tongues, or hidden among the bleached bones of a stranded whale. It has failing dunes and waves…

While it is unsurprising that we find ourselves on the last page watching the narrator transform into what we always knew he would be, an adult who doesn’t believe: “Now, at the end, I couldn’t believe in those things. It’s ridiculous to believe in a Duke of the moon… It’s all rubbish and nonsense and bothersome stuff. It’s a fine load to swallow, fine enough for when I was a child, with childish needs,” we can at least rest a little bit easier because we know Jameson cannot have abandoned these needs completely.

At the end of “Moon Rock,” the narrator chastises himself: “But mostly I stayed up too late, night after night, exhausted by excitement and despair, crying myself to sleep over cheap science fiction.” And we finish the book, thinking Jameson wouldn’t have had it any other way, as if we would have ever wanted him to.

A.D. Jameson is the author of two books: the prose collection Amazing Adult Fantasy (Mutable Sound, 2011), and the novel Giant Slugs (Lawrence and Gibson, 2011), an absurdist retelling of the Epic of Gilgamesh. He has taught classes at the School of the Art Institute of Chicago, Lake Forest College, DePaul University, Facets Multimedia, and StoryStudio Chicago. He is also the nonfiction / reviews editor of the online journal Requited. This fall, he became a PhD candidate at the University of Illinois at Chicago. In his spare time he contributes to the group literary blogs Big Other and HTMLGIANT.

Jess Stoner’s novel, I Have Blinded Myself Writing This (Short Flight/Long Drive Books, a division of Hobart), will be published in February 2012. Her choose-your-own adventure chapbook of poems, You’re Going to Die Jess Wigent (Fact-Simile), came out this summer. Her prose and poetry have appeared in Alice Blue Review, Everyday Genius, Caketrain, Juked, and many other handsome journals. Jess currently lives in the sweat and brisket of Austin.
Share This