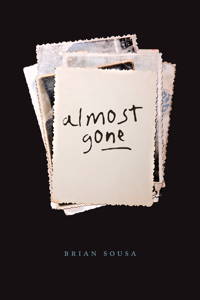 Brian Sousa’s Almost Gone, a novel in stories, spans four generations of a Portuguese immigrant family in America, all in search of better lives. These non-linear, circuitous stories are told from multiple perspectives and show characters repeatedly screwing up, in ways small, large, and even terrible. This is a collection of lives gone wrong, sometimes horribly—lives made miserable by the specter of deadly mistakes and the contradictory desires to preserve and to erase.

Almost Gone opens with “Fortaleza,” a harrowing story that introduces Scott, the grown-up grandson of Nuno and Helena, Portuguese immigrants who had settled in Rhode Island decades earlier. Scott, newly transplanted to Brazil following the drowning death of his young daughter Emily, courts drugs, alcohol, and a fifteen-year-old schoolgirl, trying to erase his guilt and his grief (Scott took Emily, dying from leukemia, from the hospital and to the beach where she accidentally drowned). Rather than erase Emily, however, Scott’s drug-induced stupors facilitate hallucinations where his dead daughter and his estranged wife appear to him—visitations that are as comforting as they are crushing. The conflict between what the characters want to persist and what they want to end—identity, culture, language, love, memories, and relationships—beats throughout Almost Gone like the break of waves.

The book’s second story, “Teach Me,” set in Spain, is another standout and centers on Catarina, a young woman propelled to travel—like so many of the characters here—in search of a new life, and ultimately in the pursuit of happiness. In ways skilled and visceral, “Teach Me” depicts our narcissism, powerlust, and grotesqueness:

The first bull was led out on two ropes, both attached to its neck, and the crowd erupted in whistles and hisses as it was released in the center of the ring. Catarina watched it skulk about, black and heaving. It was slower than she had thought it would be, and she felt herself tense up as a man on horseback rapidly approached, wielding what looked like a barbed stick. His horse wore some sort of shiny armor. The bull had no hope of running, and when it tried to, the rider flew up alongside of him and plunged the stick into the back of his neck again and again, until black blood oozed from a hole there, and the bull heaved and twitched and stumbled.

Was this it, then? Was this the fight? Next to Catarina, the old man’s eyes gleamed. He nodded to her. “Ahora,” he said, pointing.

So, now it was time. Catarina felt silly and stupid. She should have understood that it hadn’t started yet.

Tropes of perversion, of lives on the verge, and of what cannot be saved course through the remaining thirteen stories—stories narrated by characters desperately trying to forget and replace. Even as these characters earnestly search for love, they time and again self-sabotage and succumb to their weaknesses. Helena, Nuno’s wife and Paulo’s mother, imagines she can impress her husband and son by brutally killing a dog. In the wake of his wife’s death, the elderly Nuno turns Peeping Tom, spying on Catarina and taking pleasure in visual snatches of her naked body. Nuno’s son, Paulo, also obsesses on Catarina and trespasses on her in more sinister ways. The men in these stories are negligible—cheaters, aggressors, and even murderers—while the women, in particular workhorse wife and mother Helena, largely suffer and sacrifice for family. The women here are never powerless, thankfully, even if their attempts at agency are often misguided and too little too late:

When it was over and Nuno was snoring, Helena crept to the windowpane and pulled the rocking chair over to it. She stayed up all night, squinting into the blackness, watching for the dog. When the sun started to rise, she rushed downstairs.

Helena unplugged the coffee maker and put it on the counter opposite the window. Then she moved the toaster right next to it.

“Hoje é o dia,” she kept repeating to herself. “Today is the day.”

Nuno came down with a puzzled look on his face. “Why is everything
moved around?”

Helena shrugged and pointed out the window.

Nuno sat at the table and she served him his coffee with no milk and lots of sugar, the way he liked it, and set the Providence Journal in front of him. “Eggs coming,” she said, leaning over the table to stare out the window.

Nuno studied the front page of the paper. “Wait, are you still looking for that fucking dog?”

“He in your jardim!”

“Helena, I’ve never even seen him.”

“Oh!” Nuno yelled, standing and pointing at the window, “Oh! I see him! Helena! I see him! There he is!”

Helena ran out the front door and charged toward the garden, almost tripping in her nightgown and bathrobe. “Where?” she called out from the lawn, “I don’t see! Nuno! Nuno?” But no one answered. Helena stopped yelling and looked around. There was a light morning mist steaming off of the lawn, brushing the plants. It looked like smoke, the way it drifted into the street and crept into the other lawns. She wished that there was someone to wave to, or that someone had seen the way her husband had tricked her. But the neighborhood was blank and silent.

One misstep in this novel-in-stories might be the inclusion of “Smile” which is entirely an email sent from Hailey to Scott while he’s adrift in Brazil in the wake of their daughter’s death. Hailey is unconvincing here and readers might have a hard time suspending disbelief and giving themselves over to the piece. The email itself, though, is emblematic of the complexities and contradictions of time, place, and travel that drive this narrative. These characters are haunted by a past that is never gone and baited by a future that is perpetually unreachable. Perhaps what is most tragic about the generations rendered in these linked stories is their dwindling legacy, not just of culture and language, but of ways to be at home, at peace, within themselves and with the world. The setting in most of these stories is around water and we are made ever conscious of the great beauty, brutality, death, and aliveness of the ocean. We, Almost Gone shows us through fine prose and unnerving storytelling, are like water.

Brian Sousa’s stories and poems have been published in various journals and anthologies. His work is featured in a Rutgers University Press anthology of Luso-American Literature. In 2007, he was awarded a fellowship by the Rhode Island State Council on the Arts. Sousa, who grew up in the Ocean State, currently lives in Boston and teaches writing at Boston College.

Ethel Rohan is the author of two story collections, Goodnight Nobody (2013) and Cut Through the Bone (2010), the latter longlisted for The Story Prize. She is also the author of the chapbook, Hard to Say (2011). Her work has or will appear in The New York Times, World Literature Today, Tin House Online, Sou’wester, Post Road Magazine, and The Rumpus, among many others. She is a reviewer for New York Journal of Books, member of the San Francisco Writers’ Grotto, and an Irish ex-pat. Visit her at ethelrohan.com.