Alligators in the Night by Meg Pokrass 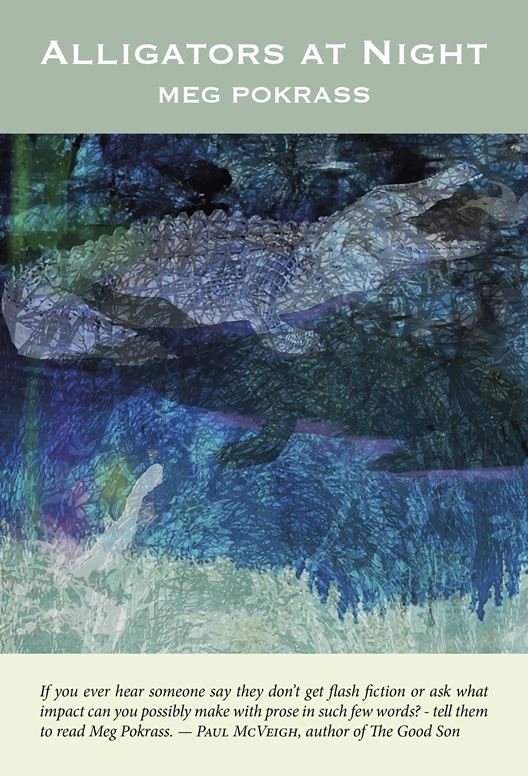 Meg Pokrass’ newest collection of flash and micro fiction titled Alligators at Night illustrates why she is a master of short fiction. Endorsed by several reputable writers, as she always is, the one who captured it best was Stuart Dybek (Ecstatic Cahoots):

The nuanced tonal complexity, which can go from the whimsical to a darker irony in the turn of a phrase, has been a signature feature of the work of Meg Pokrass. That complexity is, in her new collection, Alligators at Night, heightened further by the fertile invention and unpredictable interplay of these beautifully crafted pieces.

Pokrass’ is no novice writer. She is the author of several books, including one award-winning prose poetry collection, has been included in multiple anthologies, and published in over three hundred and twenty literary magazines and journals the world over. She has served as an editor, a writing judge, and has taught multiple writing workshops.

There are moments in Alligators at Night when Meg Pokrass uses description in an absolutely perfect manner such as in “Round Women” when she describes two women “large as human snails and round as moons.” In other stories such as “Baby Teeth”, there is a fellow sharing his long kept (forty years) baby teeth with a friend or girlfriend, and she reacts pleasantly when she should probably run like hell from this nut. In “The Benefits of Krill,” Polly is a young woman working for a dying pharmacist. Part of Polly is dying, too. She has a crush on the cashier in a shop across the street from the pharmacy, but she has enough wisdom to know that her crush will fade, too. In a very realistic and poignant moment, she reflects “Nobody knows why good people disappear.”

“Lilipad Puppygirl” is titled for the pet name that a father has for his daughter, now in her thirties, who now despises his rubbing his foot on her foot, a behavior he’d always done when she was young. If that doesn’t illustrate a family with issues, then the grandmother adds to it. She’s in the house and sings the wrong lyrics to an R.E.M. song, “Losing My Religion.” This particular story, like many of Pokrass stories, are hilarious in their description, dialogue, and wit, yet they often disguise themes of humanity that are both realistic and sad.

Another example of Pokrass’ humor and wit can be seen quite clearly in “Lifts.” When their son moved to Chile, and they hadn’t heard from him in years, we learn it was because his parents squandered their retirement to get face lifts. In fact, Frank’s father looked younger than his son. Before Frank moved, he asked his father “How the fuck would you feel if I changed my name to Leonard Bernstein and moved to Chili?” The father replied, “We all need to follow our dreams, Lenny.” Pokrass’ characters, description, dialogue, and stories keep readers laughing through the entire collection and reminds me of the sharp wit of Flannery O’Connor.

Pokrass’ Alligators at Night is a must read for any writer who wants to learn how to write flash or micro and for any writer who needs to be jump-started. Reading this collection will spark new ideas for flash pieces for writers, not from memories of the same subjects, but from the excellent descriptions. Pokrass’ genius and influence is exactly what most writers need.

Meg Pokrass (@megpokrass) is the author of five flash fiction collections, an award-winning collection of prose poetry, and a novella-in-flash from the Rose Metal Press. A new novella in flash The Smell of Good Luck will be published in 2019 by Flash: The International Short Short Story Press and a new collection of microfiction, The Sadness of Night Bugs forthcoming from Pelekinesis Press. She currently serves as Flash Challenge Editor at Mslexia Magazine, Festival Curator for Flash Fiction Festival UK, Co-Editor of Best Microfiction, 2019, and Founding/Managing Editor of New Flash Fiction Review. Meg teaches ongoing flash fiction workshops both online and in person, in U.K. and Ireland.


Niles Reddick (@niles_reddick) is author of the novel Drifting too far from the Shore, a collection Road Kill Art and Other Oddities, and a novella Lead Me Home. His work has been featured in eleven anthologies/collections and in over two hundred literary magazines all over the world including PIF, Forth Magazine, Spelk, Cheap Pop, Slice of Life, Faircloth Review, With Painted Words, among many others. His new collection Reading the Coffee Grounds was just released.