All Her Father's Guns by James Warner 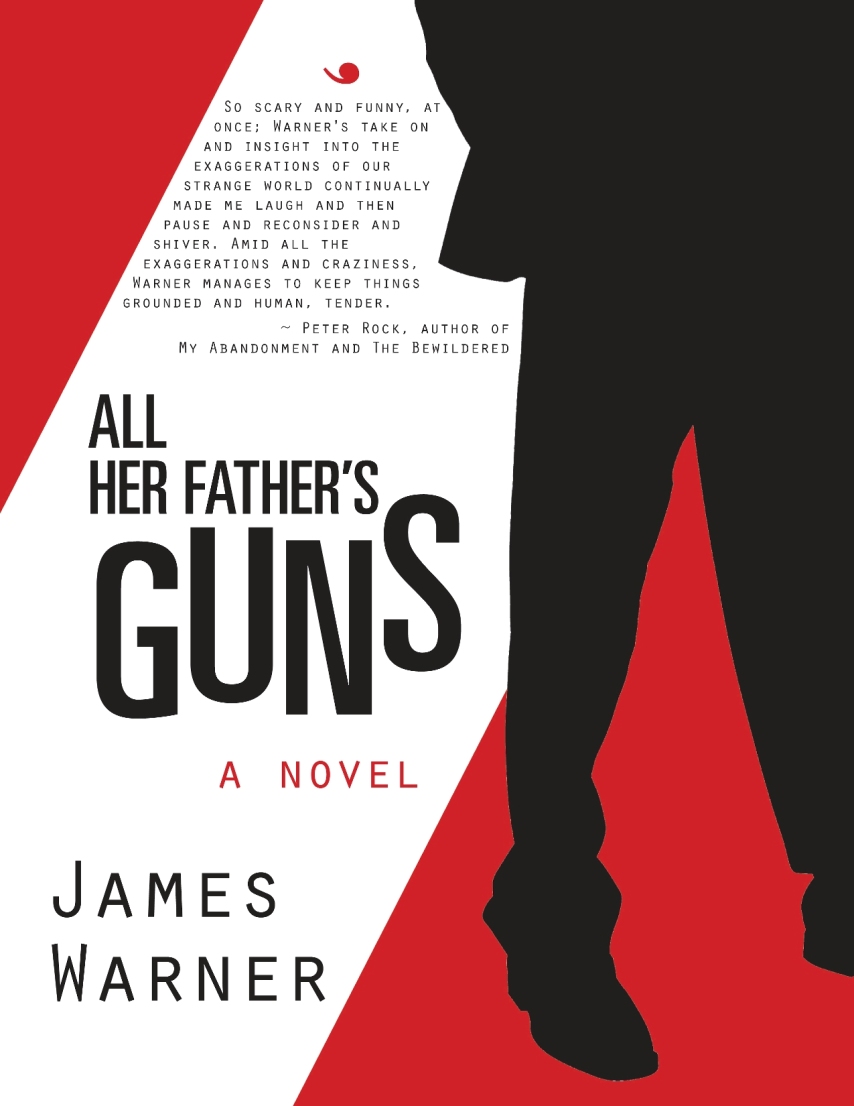 Two words on this satirical novel: wild ride. The opening lines show what Warner does throughout the novel.

I was playing footsie under the restaurant table with my girlfriend Lyllyan, while her father, Cal, tried to persuade me all kindergarteners should be trained in the use of handguns.

Do Americans talk so loudly because they’re afraid God can’t hear them?

In three lines, we have our major characters and more than one major theme. But the novel packs a lot more into its tight package, and Warner doesn’t shy away from narrative gymnastics, making dialogue backflips and plot cartwheels look easy.

We begin in first person narrative with transplanted Englishman Reid Seyton, a young PhD Theorist in California. Perhaps Reid is a character the author particularly understands, being a young transplanted Englishman living in California himself. But so too, Warner seems to have a good grasp on his other major players—in particular Cal Lyte, a divorced, gun-loving Vietnam Vet, now living in a cultish commune in Prague Springs, Nevada. Also, Cal’s a venture capitalist, evidently worth several billion dollars.

The narrative then alternates chapter by chapter in first person perspective, from Reid to Cal, as he meets and falls in love with Viorela Kescu, a Romanian Lacanian therapist Reid recommended. Remarkably, Reid too seems to understand Viorela. “Viorela Kescu told me once that we all live in the shadow of collapsed meta-narratives, and I knew at once what she meant.”

Equally often, though, Lillyan is at the center of the narrator’s discourse—especially when (in Reid’s point of view) she becomes pregnant.

This news doesn’t enter Cal’s point of view till later, and for good reason. Besides his love for guns, Cal’s single biggest motivator seems to be a hatred of abortion. He doesn’t much love the government, nor his ex-wife Tabytha, far-right Republican congressional candidate in Arizona, who uses blackmail to re-open the divorce settlement with Cal to fund her campaign. Cal loses, but then blackmails Tabytha right back with the identity of their illegal immigrant nanny from Mexico, Maria Tejera.

Finding the nanny (and further plot developments) requires driving many miles. While the pace of the novel is fast, perhaps the story would be strengthened by fewer miles travelled and more careful attention to detail. There are times the English-American perspectives blend and the untangling is a bit clumsy. An American character strangely uses the phrase “past its sell-by date” instead of “expiration date” for instance. Likewise, he drives along in his BMW, naming it as such. Don’t we all just drive along in the thing we know as our “car,” regardless of its make? That’s the tricky thing about using first person. Perhaps it’s to Warner’s credit that there are few such instances of misplaced description.

When pregnant Lillyan asks Reid if he loves her and he cannot reply, she runs to her mother and has an abortion. Reid is denied tenure at the university and has to go to Cal for help seeking employment. A ferocious game of ping-pong with the boss earns Reid the job, and all is well. But Reid realizes he misses Lillyan.

Cal becomes enamored of Viorela and decides she should bear (and home-school) his children. Much of their relationship has involved sexual games with hot wax and “Pyrex claws” which this reviewer had to google and then wished she hadn’t. Cal proposes marriage, at which point Viorela declines and reveals her past to Cal, including a murderous career as an illegal abortionist in Romania, where her training had been limited to a semester of med school. Viorela earned a steady income while she learned on the job until she was caught and had to escape the country. Her own mother was killed by an abortion gone bad, and Viorela has no interest in remorse. Likewise, she has little interest in Cal. Devastated, Cal crashes his car and suffers a traumatic brain injury. Viorela comes back to see Cal through his rehab (dialogue handled with real skill here, as Cal’s aptitude with language slowly returns). Reid and Lillyan also reunite.

Beware the temptation here to predict a happy ending. Tabytha’s campaign is heating up. Cal starts supporting her opponents and eventually puts himself in the race as a write-in, promising to buy every constituent a hand-gun. He says even a partially recovered traumatic brain injury victim is better than Tabytha. He’s getting attention. Then he learns of Lillyan’s abortion. Not only that, but a stuttering photojournalist claims to be Lillyan’s true father. Cal, once again devastated, heads for Mexico to live on a friend’s boat. He lands in Mazatlan and is kidnapped by a gang of philosophers who picked his gringo name at random from the flight register. They’re thrilled to learn they’ve nabbed a congressional candidate who can help them shed light on Mexico’s poverty—dead or alive.

This novel covers a lot of geography, both American and international. It’s a festival of name-dropping, people and plants. It has philosophy and religion, swimming pools, razor-wire compounds, deaths of children, parents, and unborn babies, treacherous oceans, and many, many guns. Dialogue and settings switch rapidly and are often tough to follow. But James Warner is funny like Carl Hiassen and on-message like Jonathan Franzen. The novel is both obnoxious and clever, and ultimately, redemptive. And like the scars left on one’s tender skin by a pyrex claw (personally, I liked the blue swirly model), this novel may sting at first, and then it’ll stay with you.

Nancy Freund is an American-British novelist and poet with a B.A. in English/Creative Writing and an M.Ed. from UCLA. In addition to writing and teaching, she’s been in editing, publishing, book marketing and publicity. Involved with the University of Iowa Summer Writing Festival, London’s Women in Publishing and the Geneva Writers’ Group, she currently lives in Switzerland.
Share This