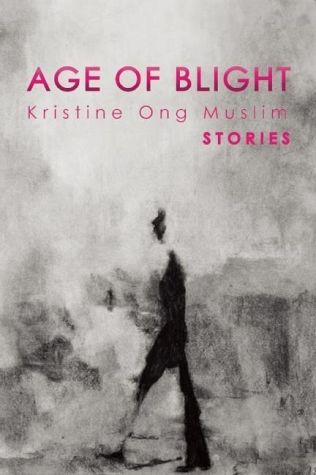 Is it in our nature to be predatory? The characters in Kristine Ong Muslim’s dystopian Age of Blight pose – and possibly answer – this question from such varied and imaginative corners that it’s difficult to choose an entrance into this inventive collection of short fiction. In “Jude and the Moonman,” though, there is a passage that serves this purpose well. The narrator, a child, muses about accepting the relationship between himself and a “ferocious pack” of bullies who have just driven the narrator and his friend Mel into a ditch:

There was an infinite allowance for pain because the course of natural hierarchy – the taut demarcation line that separated predator from prey – had to be sustained. We knew that. We respected that.

From a story in which Mel and the narrator themselves kill a deformed boy to preserve “order,” this passage informs every story – from “Leviathan,” a variation on Moby Dick in which the beast loses, to the penultimate story in the collection, “The First Ocean,” in which a post-apocalyptic society has destroyed the oceans in order to survive (we’ll look at “History of the World,” Muslim’s last story in Age of Blight later). The anthropocentric notion that human survival is more important than the well-being of animals, of the planet, and even of less sophisticated humans is without a doubt the central theme of this work and the world the author asks the reader to imagine.

This world is populated by voices as varied as the ghost of the Russian cosmo-dog Laika, a little boy terrorized by his own feral hands, another boy so given over to his aggressive nature that he plans to eat his family starting with his mother, and Muslim’s ingenious choice to give voice to an experimental lab apparatus. Formed of wire to simulate a mother in Harry F. Harlow’s infamous monkey tests, the wire mother is a powerful voice among many here. The cast of Age of Blight is staggering.

While almost all the stories in this collection are post-apocalyptic and dystopian, they also have hybrid elements of non-fiction and contemporary realism. “The Ghost of Laika Encounters a Satellite” is based on real events and a very real dog; “The Builders” mirrors any advanced society that has moved into a simpler one and ruined it in the name of progress; and “The Wire Mother,” as mentioned above, is based on real, despicable experiments. The monkey tests of the late 50s, some performed to determine how animals would respond to prolonged isolation, are presented as an example of man’s capacity to maim and torture under the veil of science. The monkeys of course went crazy, refused to eat. The tests were completely unnecessary, and even Harlow admits – at least in Muslim’s story – that he conducted them just because he could. The ghost of the dog Laika serves as a similar example of humanity’s senseless cruelty not only in one era but throughout its history.

Muslim’s introduction to this cycle is a call to the reader to join her in a world where time and place are flexible, to imagine a future – but also a past – ruined by man’s aggression and negligence. “Our lives,” she writes, “as well as those of our ancestors and descendants, are elaborate mythologies that intertwine and sometimes get entangled. There’s a purpose to this life.” These stories are indeed filled with purpose, and for this reason pinning a label onto them like “speculative” doesn’t quite do them justice. The term “suppositional” hits the mark in my opinion. The worlds Muslim has created in Age of Blight are often logical consequences of our present and past worlds. They are also, for lack of a better term, prophetic.

“Animals,” the first section of the collection, historifies the dystopian narratives that follow. It also serves to set the time frame of Muslim’s “age of blight”. There’s no ignoring that humanity is the blight in this phrase: torturers, “feral handlers,” deceivers, killers, and the bringers of pestilence.

From the authorial point of view, animals in this collection are seen as victims but also as the ultimate winners; from the perspective of the human characters, animals are experimental subjects, pets, supporting actors, conquests, burdens. In the story “The Quarantine Tank” The Great Beast – a mythic creature that is never seen – is even a metaphor for God. Beasts – Leviathan, The Great Beast, “the rough beasts of summer,” and a host of other animals – are recurring characters, but they also flow seamlessly into human and humanlike forms. In “Pet” the distinction between animal and human – the “taut demarcation line that separates predator from prey” – is challenged and redrawn:

[The pet] used to walk upright before we adopted it from the shelter. Government regulation – each family had to own one. Now it crawled on all fours, the posture of the submissive, after three months of torture . . . . A long time ago when men were still gullible, it might have been misconstrued as a creature of myth, a creature that was sacred. These days, we all took it for what it was – a creature to quench our appetite to maim other people.

Without explaining exactly where this story goes, it is worth noting that the pet ends up being kinder to the human than the human is to the pet. A similar theme is explored in “The Wire Mother,” in which the rudimentary mother ersatz ultimately imagines herself breastfeeding the psychologist/torturer, Harry Harlow. In the voice of the wire mother:

. . . I imagine how it must have been for Harry’s monkeys. I am shaped into what is supposed to be a cold and unfeeling contraption, but I realized a long time ago that I have limits: I cannot stomach torture. Torture, for me, has always been the resort of the weak, the inept, the ill-equipped.

As suppositional literature does, Age of Blight offers a message to the current world – a warning, a prophecy, a lamentation; call it what you will. It’s an important message; it’s also bleak and deeply troubling.

In Muslim’s final stroke, the story “History of the World,” we observe two men hanging perilously from their respective cliffs – a poignant image of how tenuous and fleeting humanity’s hold is on the world. Ultimately, the vultures clean up the mess as “the long, long age of blight rambles forth.” There are moments in several of Muslim’s stories when the animals mirror the ultimate image of this collection: a moment when humanity has not managed to survive but the animals persist. It’s an oddly positive message in the end – just not for humanity.

Kristine Ong Muslim is the author of several books, including the fiction collection We Bury the Landscape (Queen’s Ferry Press) and the poetry collection Grim Series (Popcorn Press), which was included in the preliminary ballot of the Horror Writers Association’s 2012 Bram Stoker Award for poetry and was twice nominated for the Science Fiction Poetry Association’s Elgin Award. Her poems and short stories appear in the likes of Asia Literary Review, Bellevue Literary Review, Boston Review, Confrontation Magazine, Contrary Magazine, Ellipsis, Existere, Gargoyle Magazine, Harpur Palate, Hobart, Narrative Magazine, and Sou’wester. She grew up and continues to live in a small farming town in the southern Philippines.

Christopher Allen, the managing editor at SmokeLong Quarterly, is the author of Conversations with S. Teri O’Type (a Satire). His book reviews have appeared at PANK, The Lit Pub, Word Riot, Necessary Fiction and more. Read his short fiction in Eclectica Magazine, Indiana Review, Night Train, Contrary, and others. He splits his time between Dublin and Munich and blogs about his crazy life here .