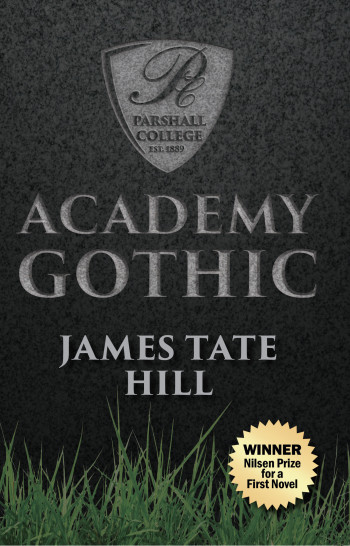 James Tate Hill’s Nilsen Prize-winning debut novel, Academy Gothic, is marketed as both hardboiled noir and academic satire, an unlikely combination that in the wrong hands might spell doom; after all, the detective genre has its fair share of recognizable tropes while satire can often be hit-or-miss. The thought of stuffing the two together risks overkill, but Hill avoids a paint-by-numbers novel by forging enough humor and mystery to create a story that never threatens to sound too familiar. Set on the campus of the fictional Parshall College, Academy Gothic is narrated by Tate Cowlishaw, a business lecturer and the college’s de facto paranormal expert. Legally blind and a mediocre instructor at best, Tate is thrust into the role of amateur detective upon the discovery of the campus dean murdered in his office, and from the onset of the novel, Tate descends into a depraved and madcap world of academics in an attempt to locate the individual(s) responsible. Hijinks and further crimes are committed, and Hill manages to keep a breakneck pace as he leads his narrator and readers on plenty of wild goose chases that include a threat to shut down the college, several faculty members jockeying to secure steady employment through whatever means necessary, and the usual detective novel standbys: mistaken identities, double-crossings, and unexpected twists.

The novel’s greatest strength is its familiarity not only with its subject matter but its ability to poke fun without resorting to exaggeration. Hill seems to be pointing out the very real quirks of higher education, and his take on the academic world is at its funniest when capturing Tate’s objections to the everyday business of the job — he’s constantly deleting student emails and finding ways to avoid office hours. Elsewhere, Carla, maybe Tate’s closest confidant, is one of Parshall’s writing instructors, and her quest to have her fiction published becomes an issue in her attempt to secure a tenure position. The fact that Carla’s supposed soon-to-be-published novel is about vampires might seem a bit ridiculous given the chances of a vampire novel securing anyone tenure, but that’s sort of the point, and Hill uses this (and Carly’s supposed MFA from Iowa) to get in a few good jabs. The metaphorical backstabbing between colleagues and the attempts to further one’s career either through publications or presentations take place at all institutions of higher learning, and Parshall is no different. Hill brings humor to these sort of moments with Tate’s characteristic quips about how little these colleagues truly enjoy being around one another. Following a memorial service that seems to function more as a departmental meeting, Tate observes his fellow faculty:

The rest of us congregated in the lobby. It was tradition, or unbreakable habit, to endure each other’s presence for a few more minutes, express outrage over new tasks we had been assigned. From my colleagues’ anger I could gauge how many reminders I would receive when my task went uncompleted.

With such passages, Hill portrays academic life quite well, foibles and all, and to his credit, Hill seems intent on presenting Parshall as less like a clown college and more like a run-of-the-mill incompetent college; thus, the mocking of higher education usually feels authentic rather than hyperbolic. A few occasions, however, find Hill perhaps bordering on the absurd (the faculty offices reside in an empty swimming pool, the overhauled curriculum includes a potential course in space tourism), but even these moments are likely to elicit laughs from readers who prefer their fiction spiked with a bit of the nonsensical.

Hill also shows a more than capable grasp in framing a detective narrative and creating a flawed but likable protagonist. Tate is a well-drawn character forced into the role of a fish-out-of-water sleuth tasked with solving not only a murder but a host of other mysteries — including a second murder — that arise the further he delves into Parshall’s ineptitudes. While perhaps less realized in terms of introspection (the novel almost moves too quickly to allow much in the way of internal reflection), Tate comes alive most in his narration. His dry wit and everyman demeanor suit him well as an innocent bystander suddenly in the midst of a murder mystery. At one point, he’s brought in for questioning by the police and given donuts and coffee that “tasted like a charred potato.” The officers tire of his antics and place him in a holding cell, yet it does little to dissuade Tate:

For a moment, I felt dangerous and vaguely important in my tiny cell, nothing but a sink and a toilet with no seat. Then I felt nostalgic for the thin white room with the donuts and terrible coffee.

I considered shouting my innocence, but outrage didn’t come naturally to me…. I got used to the concrete floor. After a few hours, the strobe effect of the buzzing light no longer nauseated me. I imagined getting used to a trial and the bad breath of a nervous, court-appointed attorney.

As with most detective novels, the plot of Academy Gothic grows more layered as the pages mount, and fans of the genre are sure to follow along willingly. That said, like some detective novels, Academy Gothic may also seem bogged down by the number of twists it takes. Tate finds himself the subject of multiple amorous advances, and in almost the time it takes both women to admit their attraction, Tate also discovers that both have potentially ulterior motives. In fact, as the novel progresses, just about every character seems to have several motives for what they do, and as more characters are introduced and fleshed out, the story, at a near-250 pages, may pack too many twists for those unfamiliar or unenthused by the detective genre.

Ultimately, Academy Gothic offers readers a detective novel with a unique backdrop far from the usual gritty landscapes of modern mysteries. With enough humor and drama to keep the pages turning, the novel provides not only a well-told story but an astute look at a world few get to see.

James Tate Hill (www.jamestatehill.com • @JamesTateHill) was born in Charleston, West Virginia. A graduate of the creative writing programs at Hollins University and the University of North Carolina Greensboro, his fiction has appeared in Story Quarterly, Sonora Review, The Texas Review, The Laurel Review, and elsewhere. He is the fiction editor for the literary magazine Monkeybicycle and lives in Greensboro with his wife, Lori.