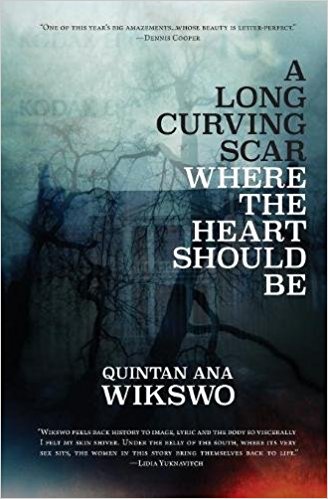 Pulsing at the center of Quintan Ana Wikswo’s lush new novel, A Long Curving Scar Where the Heart Should Be, is a huge white house on a hill—a house inhabited by three women, abandoned by the man they love, and the outcasts they succor. The house itself, “The Plantation, some still called it,” belongs to the man in question’s family, passed down through generations. The house, like the women living inside it, has fallen into a state of grace that the people below, in the town of Lynchburg, call ruin.

There was once beauty here, of the fairy-tale, facade type, as Maw tells her twin daughters in the first pages:

[T]here were gumdrop trees and lemonade rains and all the children were fat and tasty and made of gingerbread and oh how they lined up to climb onto the cookie sheets at lunchtime.

But something has gone wrong, the hills are alive with talk of three hundred men disappeared and presumed dead. Among these men, though not of them, Lafayette—Maw’s husband, the twins’ father—galloped off into the night, landing at a brothel where he contracts syphilis.

Whitey and Sweet Marie, as the twins are called, are a study in opposites. Like film negatives, where Whitey is dark, Sweet Marie is light. Whitey is bawdy, all appetite and viscera, flesh and fury. Sweet Marie is delicate of body, dreamy and ethereal, prone to flights of fancy. While Whitey laments the loss of her father, Sweet Marie finds solace in the story that he doesn’t truly exist.

The twins carry the bulk of the narrative of A Long Curving Scar Where the Heart Should Be, though the book does occasionally shift perspectives: Maw, Lafayette, Whitey’s soon-to-be lover and life partner, Skinny Jones, and others find their voices in these pages. And though it never directly speaks, the white house is its own character—solemn and sordid and looming behind the scenes. The house infuses the narrative with a sinister air; it seems to hold Maw and the twins in its ghastly power.

Slotted between each short chapter are Wikswo’s atmospheric photos—many of them capturing historied buildings of the American South—which lend an uncanny touch. The house, indeed, holds within it all the unsettling truths of American history:

The grief in the house was not articulated, but it was ancient, it was larger and longer and bigger than the women, it went back to ripped apart continents, to the center of the earth, it fed on the magma of loss, its lava the only trace of injustice in the void…

Witnessing this kind of reminder, even in fictitious form, is more difficult than one would like to admit—whitewash all we may, the truth of history refuses to be erased.

Split into four sections titled after the four hollow chambers of the heart, Wikswo’s unsettlingly vivid novel isn’t so tidy as that (this is, after all, a heart that has been plucked from its chest)—the narrative and all contained within it aims to break boundaries, just as Whitey and Sweet Marie seek to break the chain that tethers them to the house. As the story progresses, Whitey seeks solace in the voracious appetites of the men in town, and Sweet Marie attempts to anesthetize her pain by escaping to a local nurses’ college. But these long trod female avenues of escape leave the twins even more disenfranchised.

It is only through return, to the house and of their father, that the girls can truly break the bonds of their bodies and birthplace. Once set free, Whitey settles down in a cabin with a man and adopted child and Sweet Marie sets off, alone, to New York City with the jazzy love child of her long-ago one night stand still moving in her belly. Perhaps these eventual avenues might not seem terribly out of the ordinary, but given that the novel is set in the 1930s, that the twins are mixed race, that Whitey never marries Skinny Jones and Sweet Marie’s lover was female, it’s safe to say the twins are paving new paths, for themselves and for the lives that inevitably follow.

Quintan Ana Wikswo possesses a singular vision. Her methodology—which includes the use of segregation era cameras, and involves absolutely no digital manipulation—allows for eerie images that capture the complex and contradictory nature of history. The images within A Long Curving Scar Where the Heart Should Be are already haunting, and when placed alongside Wikswo’s gothic, revelatory text, they create an aesthetic that is electrifying and provocative in the best possible way.

In her “Notes on Methodologies” in the back of the book, Wikwso writes:

I want…to help establish the power of politically-engaged artmaking. …I want to render visible the ways in which societies use institutional architecture and ecological obstruction to conceal systematic crimes against marginalized people.

Visibility, and its sister intention, exposure, are not easy—to capture or witness—but Wikswo succeeds mightily in A Long Curving Scar Where the Heart Should Be, and she achieves one further coup: the creation of a breathtaking piece of art.

A Long Curving Scar Where the Heart Should Be is in some ways a reminder: of what has been ripped away, of what survives—and thrives—in places where atrocious crimes against humanity have been committed. In the end, there does lie salvation, uneasy though it may be, for Whitey and Sweet Marie. As is always the case, birth follows death, and love can grow from fallow ground. Scars heal, though we wear them as a reminder of what we have lost, and sometimes, of what we gain.

In light of the frightening abuses of power currently shaking America, the recent events in Charlottesville and the ongoing conversation around the removal of confederate monuments, and the increased visibility of the assaulted female body, Wikswo’s new novel is highly relevant to our cultural moment. A Long Curving Scar Where the Heart Should Be deserves a place on the shelf of classic American literature—opening, as good books always do, our eyes to a world previously obscured from view.

Quintan Ana Wikswo is a writer and visual artist whose work integrates fiction, poetry, memoir, and essay with her photographs, performance, and video. Her writings are published, performed, and exhibited internationally; including anthologies; artist books; magazines such as Tin House, Guernica, Conjunctions, Kenyon Review, and Gulf Coast.

Sara Rauch is the author of What Shines from It (forthcoming). Her prose has appeared in apt, Split Lip, Gravel, Hobart, and elsewhere. She lives with her family in western Massachusetts.