A Handful of Sand by Marinko Koščec

Translated by Will Firth 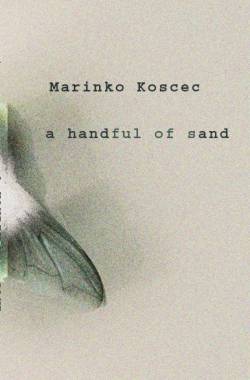 Marinko Koščec’s A Handful of Sand is the autopsy of a passionate love affair. An artist and a publisher from Zagreb recount the stories of their lives leading up to the day they first met, weaving present and past, fantasy and self-analysis into a humane and utterly convincing novel. At the same time it is the story of Croatia from the early twentieth century to the present day, a country suffering the worst effects of corruption, bigotry, and war. Published by London-based Istros Books, an independent publishing house specializing in South Eastern European literature, A Handful of Sand is the first of Koščec’s six novels to be translated into English.

One first notices that most of the characters aren’t named. The two narrators are referred to only with personal pronouns, and the major players in their lives are simply labeled “Mother,” “Father,” “the Boss,” etc. Translator Will Firth has written an excellent Translation Notes article here at Necessary Fiction which explains that anonymous protagonists are common in literature of ex-Yugoslavian countries. Koščec distinguishes the narrative voices with typeface: the man’s chapters are typed in the formal Constantia font, while the woman’s are in a slick sans-serif font called Franklin Gothic Book. Despite the characters’ anonymity they are distinct, complex, and memorable.

Each protagonist is an only child from a broken family. The man’s father left when his mother got pregnant, and in his absence she assumed both parental roles. His mother is his scourge and minister, constantly criticizing his “behavior” (a word he comes to loathe) even while providing an island of stability. Perhaps too much stability. His overdependence on his mother leaves him an emotionally crippled neurotic. At times, as he digresses almost seamlessly from realistic narration to fantasy, he seems just one misfiring synapse away from becoming the next Norman Bates. His mediocre career as a student leads to a mediocre job in publishing, where he most excels at being the butt of unhappy clients’ abuse.

The woman has a difficult relationship with both her parents. In one crucial moment, when she is fourteen years old, her father eavesdrops on a telephone conversation and overhears that she has lost her virginity.

I heard that, he growled, dashed into the room wild-eyed and laid into me with fists and feet. Mother didn’t lift a finger or say a word to stop him. When the ‘lesson’ was over, she took my head in her lap and stroked it until I’d cried my very last tear. Then she quietly closed the door behind her.

After her mother’s early death, her father diminishes into illness and depression, which forces the woman into a maternal caretaker role. Despite her father’s abuse, she remains loyal to him. She doggedly pursues her studies and career as a graphic artist, fighting to strike a balance between commercial jobs like painting for tourists and the more personally significant projects she hopes will make her name.

The narrative proceeds in alternating chapters — he speaks to her, she speaks to him — but like Mikhail Shishkin’s The Light and the Dark it is only a semi-epistolary novel. We know they are addressing one another directly, but we also know the messages aren’t being received. Despite this separation of narrating voices, however, frequent repetitions of events and images imply that both voices come from an identical source. With each subsequent reading of the novel one discovers new layers of correspondence and variation between the two narratives. Asian restaurants keep showing up, as do drug addicts, beach getaways, hunting rifles, poisoned cats, dangerous buses, old women. Moments in his youth seem to prefigure moments in her adulthood, and vice versa. We have to wonder: is this the author announcing his presence in an arch meta-fictional move, or is it mere contingency? By encouraging this sort of reading, by making the reader try to piece together what’s happening, Koščec enacts one of the novel’s central themes: in the face of chaos the desire for stable meaning compels us to become bricoleurs, taking whatever we can scrap from the garbage heap of history to assemble something — anything — that can hold meaning for us: a self-defining narrative, a work of art, a family, a religion, a country.

Such an assemblage will be inherently complex and, within the larger historical context, self-contradictory. In Croatia, where the church and state have only in the last decade begun to separate themselves from one another, there is little separation between the spheres of sex, religion, commerce, and government. The woman’s financial independence and artistic commitment depend upon a certain attitude toward men and sex. Motherhood, she has seen, is the end of many an artistic career, but she has to be sexually aggressive to stay in the game. The religious apparatus of sexual repression turns the masculine gaze into a powerful economic force, a force that she needs to exploit and be exploited by to survive. The man’s most intimate and long-lasting relationship is with a girl of deplorably xenophobic, jingoistic opinions. Sex stops the gap between their worldviews, for a time, but there is always more to it than sex for him. He relishes the possibility of inheriting some portion of her family’s fortune and bourgeois respectability. He envisions himself not just with her but with her fine family in their fine house, despite their bigotry. In such a culture — in any culture — identity is a compromise.

Once the two protagonists meet, their sexual relationship is a suffocating, primal, elemental plunge into the physical. The direct contact of bodies displaces language, and in the infancy of love they draw close to the silent truth of their own bodies. It is intoxicating.

… all the separation we’ve endured now gushes forth, rushes to recover what is ours, all of life has marathoned and moulded us for this moment, with Spartan austerity for this eruption, whatever we experienced before was only for comparison with this, for the sake of euphoria at discovering the original; bare skin takes on the role of lungs, inhaling the heavenly manna from the other skin, drinking it without breath, with elemental passion, as if possessed…

It is the closest thing either of them has had to revelation: a sublime experience outside language that necessitates the construction of a whole new narrative for one’s life, an altered interpretation of the past and a new vision of the future. Will Firth has done an excellent job translating Koščec’s acrobatic playfulness—with philosophical, artistic, and poetic registers throughout the novel, but especially in these scenes.

Did the couple have to fall apart, and does their doing so make this novel tragic? Have they been strengthened by their passion, brief as it may have been, or are they only left the worse for wear? Koščec doesn’t provide easy answers, but a more facile treatment would only have weakened the novel. That he doesn’t explain himself shows the level of Koščec’s mastery. Its lyrical beauty, humor, and rich ambiguity make A Handful of Sand eminently re-readable. With luck, and a bit of pressure from grateful readers, hopefully we’ll be reading more translations of Marinko Koščec soon.

Marinko Koščec is a Croatian author and professor of French literature at the Faculty of Humanities and Social Sciences in Zagreb. He is also an editor at the SysPrint Publishing House and teaches novel writing at the Sarasan creative writing centre. He is the author of five novels: Someone Else (2001) was awarded the Meša Selimović prize for the best novel published in Bosnia, Croatia, Serbia and Montenegro, and A Handful of Sand was nominated for the prestigious Jutarnji List award.

Will Firth is one of the leading translators from Russian, Serbo-Croat and Macedonian into English. A native of Australia, he has lived for short periods in the UK and Croatia, and now resides in Berlin, Germany. He is accredited as a translator from Croatian, Macedonian and Russian into English with NAATI (the National Accreditation Authority for Translators and Interpreters, Australia). He has translated from Serbo-Croat to English over a vast range of genres; from film and academic texts, to literature and humanities.

Tim Ellison lives in Boston, MA. eBook producer and freelance editor by day, in his free time he writes essays and poetry and serves as an editor at Ox and Pigeon Electronic Books (oxandpigeon.com). He can be found on Twitter at @timothyjellison.