A Friend in the Police by John Givens 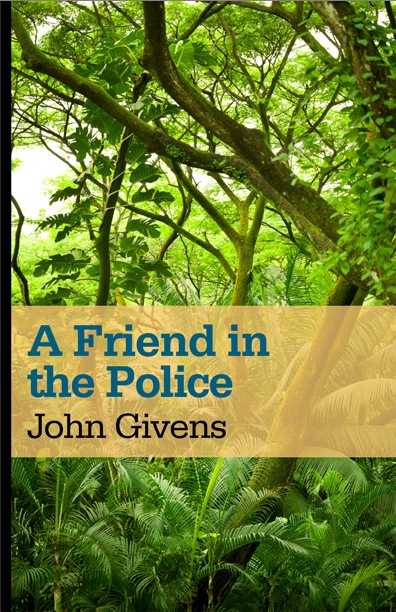 John Givens’s A Friend in the Police opens in a cramped and sweltering customs hut in an unnamed Southeast Asian country where sixty-something George Bates has traveled to find word of his son, Philip. This fairly easy story, of an American gone to find his wayward or misguided son in an exotic and unfamiliar land, is really a kind of red herring for the novel’s true heart—a journey through the fascinating and farcical mind of Detective Sergeant Xlong, head of police in this jungle town. A jungle is obviously a tangled place. Vines, twisted paths, impenetrable shadows and impassable waterways. But the Detective Sergeant’s maze-like, shadowy and often shockingly beautiful thinking is an excellent rival to that gnarled geography.

Thus this first scene in the customs hut, featuring the Detective Sergeant, George Bates, a handful of lower officers and a one-sided interrogation, sets the tone for what will become a Kafkaesque romp through two equally impenetrable jungles: the physical jungle upriver from the town, and the emotional jungle of Xlong’s mind.

Detective Sergeant Xlong wondered if Mr. Bates might not like to share the anguish felt by a troubled father far from home in bad weather. It was always off-season here. Visitors dwelt unduly on the climate. In fairness, it should be mentioned that during a brief dry period after the monsoon, an entire day could pass with hardly more than a sprinkle. “Moss beds turn brown, Mr. Bates, and liverworts wither. We have a song about it, a sad one.”

George Bates glanced at Detective Sergeant Xlong, who smiled and squared his cap. He realized he talked more than was usual for a policeman. It was the jungle coming through, insisting upon itself like the weight of wet leaves on one’s face, the green mud sucking at one’s ankles.

This bit of poetry surges forth as the policeman walks Mr. Bates to his hotel once they’ve finished with the appropriate bribes and formalities. It is typical of the twist and jump of Xlong’s mind. If the Detective Sergeant isn’t ruminating on the metaphysics of authority, he is musing on the definition of love. All the while keeping a firm inner eye fixed on himself and his own behavior. Xlong’s incredible self-preoccupation is a matter of extreme comedy, at many turns throughout the novel, but it is also the source of the reader’s sympathy. On the surface, we are meant to be worried about Philip Bates—what kind of mess has he gotten himself into? Is he working for the “rogue” geologist and tin miner upriver? Is he involved in smuggling contraband? Is he running an illegal gambling operation with another foreigner named Sprague?—but each time the story threatens to become more interested in either of the Bates men, Xlong steps forward to claim his due attention.

With Detective Sergeant Xlong, Givens has created one of those classically conflicted characters, the kind of fictional creation with the power to influence future generations of writers. Xlong is the perfect mixture of farce and tragedy—a celibate police sergeant (although in love with a local masseuse from Hong Kong named Moule), hounded by a tragic family history, obsessed with his police manual and its practical suggestions, and hampered by an earnest and complicated desire to help the Bates out of their dilemma.

Throw this against a backdrop of typical underdeveloped-world politics—the rebels upriver are fighting with the geologist and his mining empire now in decline, the locals are as corrupt as Xlong pretends not to be—and what follows is poignant comedy. Nothing syrupy. Nothing cliché. Xlong is hilarious, ridiculous, laughable—all of these things—but he is also supremely human. His flaws are so wonderfully understandable and his solitude so pitiful. Givens pretends to give us an exotic and inexplicable being and yet beneath Xlong’s often precious thinking lies the simple and uncomplicated desire to be necessary, needed, loved.

The novel successfully carries both of its stories through to the finish, even bringing them together neatly in the end. Despite the fact that each step forward, each new clue to discovering what has happened to Philip Bates is often immediately contradicted or disregarded, the novel leads the reader on an action-packed hunt through the town and into the upriver jungle. Eventually, as predicted by the Detective Sergeant, there is a death and a formal inquiry. But just as the reader is increasingly compelled to follow Xlong’s descriptive visions of reality, so must the story bend itself to suit his understanding, his desire for the turnout of all events.

“Homicide,” the policeman replied, “or the conspiracy to commit homicide. I need hardly add that homicide carries an extremely harsh penalty. With conspiracy, a suspended sentence is possible. The malefactor might even be released to the custody of his father. Therefore, any information you can give us as an aid to the investigation would benefit your son.”

“Has been killed, will be killed, is being killed…” He placed one hand on the bar counter and observed what it looked like there. “The investigation has its own innate rhythm, Mr. Bates, but at the moment, we would do well to proceed as if it could be hurried.”

Stories about journeys into jungles or other unknowable terrain are often about psychological unraveling, and so as it should, A Friend in the Police involves serious collapse. Xlong must in his own way be defeated, and find himself lost inside his own jungle. Givens executes this breakdown with a shift toward a messier and extended prose style, with more poetry and disconcerting imagery. Sea turtles lie gasping for breath in the marketplace, Xlong tells of mothers milking cobras to protect their sons, the jungle moss creeps and fungus spreads to cover all surfaces, vultures lurk but do not eat. The language of the novel begins to break down as well until the reader is left with a series of vibrant images and surreal decisions.

But Givens stops short of leaving us in madness. As Xlong has taught us, the jungle is not to be defeated. Only maintained.

And the policeman, as he turned to rejoin his guests, what did he know? He knew the blink in the vulture’s eye. He knew the green of the rain and the brown of the river. He knew that he himself would no doubt live on and on.

John Givens was a Peace Corps Volunteer in South Korea, studied art and language in Kyoto, and worked in Tokyo as a writer and editor. Givens also worked as creative director for digital design studios in NYC and San Francisco. Givens has published three novels: Sons of the Pioneers, A Friend in the Police, and Living Alone. A short story collection, The Plum Rains, was published in Ireland last year. Givens’s short stories have appeared in Kyoto Journal, Mississippi Review, Necessary Fiction, Wag’s Revue, Word Riot, Drunken Boat, Eclectica, Cerise Press, Asia Literary Review, and other journals. Givens’s non-fiction includes Irish Walled Towns, as well as essays and book reviews. Givens lives out on the wet and windy Howth peninsula north of Dublin Bay and teaches fiction writing at the Irish Writers’ Centre.

Michelle Bailat-Jones is a writer and translator living in Switzerland. Her fiction, translations and criticism have appeared in various journals, including Ascent, The Kenyon Review, The Quarterly Conversation, Cerise Press and Fogged Clarity. She is the Reviews Editor here at Necessary Fiction.
Share This