A Field Guide to Murder and Fly Fishing by Tim Weed 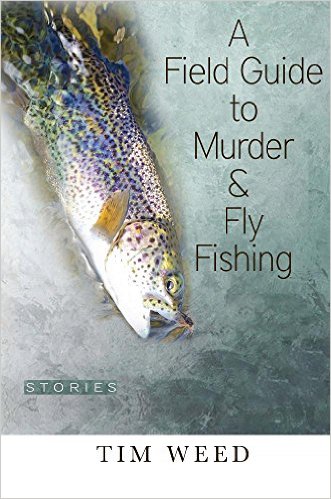 In the back corner of El Floridita, a cocktail bar in Old Havana, a life-size bronze statue of Ernest Hemingway encourages tourists to pose for selfies and knock back daiquiris at $7 apiece—about 30% of the monthly income of the Cuban workers passing by outside. Hemingway, who once split his time between the hedonist’s playground of Havana and his proper residence in Key West, is to this day considered a master of prose. Stories like “The Snows of Kilimanjaro” and “The Short Happy Life of Frances Macomber” remain staples for creative writing grads; a grandfatherly reminder to keep one’s sentences crisp and “write what you know.” Of course, not every MFA has Papa’s passport stamp collection, nor his unfettered “Lost Generation” access to cultural voyeurism.

Except, maybe, for Tim Weed. Having been transplanted by his adventurous parents from Colorado to Central America at age six, this avid student of literature has been on the go ever since. The extent of his travel exceeds even that of Hemingway—a favorite lecture subject of the long-time writing teacher and some-time onscreen expert for National Geographic. Weed has one of those resumes wherein the words “except Antarctica” close paragraphs brisk with capitals and capitols. Movement is a defining attribute of his life and a central theme of his fiction.

If the stories in A Field Guide to Murder and Fly Fishing sometimes read like travelogue, they’re tuned to the pitch of Paul Theroux or Bruce Chatwin: landscapes and climates are rendered with emotional deference to the observer. Rome, the Amazonian jungle, ruins, rivers, and mountains serve as context for coming-of-age dramas or post-colonial friction—each evincing a subjective truth. Weed’s protagonists are mostly on the youthful side, students and roustabouts, with a few older, more sculpted professionals Indiana Jonesing their way through these articulately drawn locales. The road story “Steal Your Face” follows a couple of acid-eating Deadheads from New England’s tangle of highways to the stark and boundless West, the specter of uncertain future haunting each trip. Meanwhile, “A Winter Break in Rome” sees an American student facing the one-two punch of a beautiful girl’s indifference and a beautiful city’s outright aggression. Fans of Whit Stillman may notice a Barcelona vibe here, with synchronic comparisons of Reagan-era policy to the fascist closet-skeletons of their respective settings. A political conscience lives just under the surface of the collected text, but like many of its entries, this story’s vibrance is in its prose: “Rome puzzled me. It still does. There seems to be something ugly in the air, a whiff of ancient savagery seeping up through the flagstones.”

Weed is exacting in his descriptions, through which he also proves a gifted stylist. Structurally, though, he tends toward familiar tropes, casting them with equally familiar archetypes. In “The Mouth of the Tropics,” for instance, a headstrong biologist seeking rare specimens ignores a warning of “bad medicine” and enters a forbidden jungle. The white scientist is career-minded and unsuperstitious. The natives are standard-issue Noble Savages. The curse wrought by his foolhardiness is as vague as it is expected. In “The Camp at Cutthroat Lake,” a father attempts to raise his son to be better than himself, but finds the boy only a lazy and violent mirror of his own adolescence. Winsome critters die nobly in a postcard of the Great Outdoors, but the masculine ideal remains elusive.

However, cliché is a funny thing. In some cases, as with the aforementioned Indians, it’s a stagnating force. But clichés can also be used subversively (as Hemingway knew, and Weed knows), to call forth and then challenge a reader’s assumptions. Occasionally, Weed stagnates, letting his consistently strong and affecting sentences carry the piece. But just as often he subverts, with profound results. Stories like “Scrimshaw” and “The Afternoon Client” peel back the common exteriors of their blue collar subjects, exposing layers of alienation, classism, and violence.

Perhaps the greatest story in Field Guide is “The Money Pill,” whose white, American narrator operates a tourism business in Cuba, not long before its official opening to US visitors. With a kind of wearied naiveté, he details a succession of affairs with his “Cuban girlfriends,” women drawn not so much to him but the magnetism of American currency. Of his experience as a tourist of the Global South he explains, “The island held a peculiar kind of magic for visitors … It was like one of those amazing dreams where you discover a new superpower.” He implores the reader to believe there had been affection in what, for these women, were so clearly business exchanges. The story culminates in his refusal to sleep with a fourteen-year-old girl, but her sexual advances are not what shocks: rather, that the pragmatic child is fully aware of her economic plight, while the lovesick gringo has yet to grasp his own privilege and moral debasement. “The Money Pill” feels like essential literature—for its self-awareness, its bold impeachment of globalism, and its sultry, sticky atmosphere of arousal and shame.

Even without his bronze statues and prevalence on college syllabi, Hemingway would have become a cliché: the Great White Hunter, the ur-tourist of American letters. His voice now blends into the ubiquitous noise of Western patriarchy. But if we malign Hemingway and his progeny—a bloodline to which A Field Guide to Murder and Fly Fishing could be said to belong—it’s because the archetypes of power from his day have remained in power all along. Tim Weed is a writer who knows how to interrogate those archetypes, smash them open, see what they bleed—and, if necessary, take them fishing.

Tim Weed works as a featured expert for National Geographic Expeditions in Cuba, Spain, and Tierra del Fuego, and is the co-founder of the Cuba Writers Program. His first novel, Will Poole’s Island (Namelos, 2014), was named one of Bank Street College of Education’s Best Books of the Year.

Matthew Stephen Sirois is a fiction writer and essayist. His work has appeared in The Stranger, The New Guard Review, Split Lip Magazine, and The Ghost Story. His novel Near Haven is forthcoming from Belle Lutte Press. Matthew lives in rural Massachusetts with his wife and daughter. Follow him on Twitter @matthew_sirois or at matthewstephensirois.com.
Share This