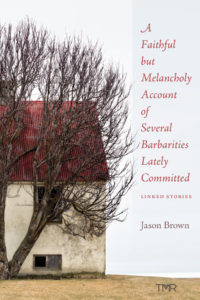 Jason Brown’s A Faithful but Melancholy Account of Several Barbarities Lately Committed is a linked story collection about families, storytelling, and how the two combine. It gives the history of the once-eminent Howland family, whose hold on their legacy and land on the Maine coast slips over the course of decades. The stories cycle through an array of narrators and characters, but two men play the most prominent roles: John Stoughton Howland, the forbidding patriarch whose WWII PTSD is introduced to readers in the first story, and John Jacobs Howland, Stoughton’s grandson, who meanders through self-discovery, unhealthy lifestyles, and stock domestic life. One represents the older side of the family, too entrenched in memories and traditions to move on, and one the younger generations who struggle to reconcile an austere but historical family legacy with a desire for modern life. The most interesting tension of A Faithful but Melancholy Account comes from the moments of reconciliation between these two sides.

Even in pivotal moments, Brown’s prose remains reserved, carrying the feeling of water lapping against a dock on a foggy morning. Characters’ discoveries and transformations happen most often in negative space: in a silent, empty room, John Jacobs learns that his grandfather has been lying to his family; over tea, Franklin Mitchell gathers the courage to ask a Howland friend about his enigmatic grandfather. Phoebe Howland, John Jacob’s cousin, visits their uninhabited, about-to-be-sold family home and ends up reading her Aunt Helen’s diary through the night, surprised at its parallels to her own life. Helen, living in the early 1900s, frequently went to sea with her captain husband, and her and Phoebe’s story (“The Wreck of the Ipswich Sparrow”) morphs into the most unusual and gripping one in the collection as the diary entries turn to an account of the shipwreck that upends Helen’s life. She is stranded on Sable Island, a surreal strip of sand known for treacherous waves, constantly shifting sand dunes, and supernaturally strong winds:

The wind increased with every footfall until it screamed in her ears; she didn’t know where she was… The moment her feet left the sand, the wind erased her footprints. Storm clouds hurled overhead, and she stood on the beach where she had first landed in the lifeboat. The island shook as Atlantic rollers broke and crashed into the bar.

Through the filter of diary entries — a more organic version of the reservations Brown tends to impose on his prose — the writing finally runs wild with poetic descriptions of grief, hope, and the power of nature. It’s catharsis in a collection that, besides this story, deals in large part with things left unsaid. When Phoebe returns home to California at the end of “Ipswich Sparrow,” she decides to pass Helen’s tale on, feeling a compulsion to preserve her family history even on the other side of the country. This motif of storytelling overcoming familial disconnect ties together, with varying levels of subtlety, all the other narratives — A Faithful but Melancholy Account is, essentially, a linked story collection about linked stories.

“Goat,” the eighth of ten stories, is as good a thesis statement as any for the Howlands’ view of storytelling. It depicts John Jacobs at 47, settled into a stable life after bouncing between careers and homes. Returning to Maine for a funeral, he is recruited to help his cousin deliver a goat to a drug dealing couple living on a nearby island. The two reminisce about their childhood on the way, and John dredges up Melancholy Account’s central conflict as he considers how he feels about coming back to Maine. “Close proximity to family loaded me with resentment and guilt in roughly equal proportions,” he thinks, but also remembers cutting down Christmas trees with his grandfather as a child and how John Stoughton’s “gloved hand brushed against the branches of every tree in reach as if he were greeting a crowd of fans.”

John Jacobs is pulled back to the past with a reluctant obligation, and he’s called even more strongly when the boat he and his cousin take to the island drifts down the river without them. He’s forced to make a choice: commit to rescuing this symbol of his complicated family history, or wait for rescue from a stranger and let himself break free? This new story unfolds, and when they make it back to the mainland, John is already thinking of how he will retell it to his son, echoing all the family storytellers before him: “he’d want us to go over and over what had happened until he knew every detail by heart.”

Besides “Ipswich Sparrow,” Brown’s description is most compelling when he zooms out at the ends of stories, allowing the reader to bask in simple yet quietly beautiful passages like the closing sentences of “Return of the Native”:

I knew Grandma had meant what she’d said; I wanted to believe her. Outside my window the moon traced a silver line from the distant islands across the bay to the cove below our house. A breeze filtered through the screen and touched my neck, and I listened to the long, shallow waves collapsing on the beach with a hush.

These scenes don’t bring anything new to a visualization of the New England coast, but their poetic sense of familiarity adds a spark to the collection’s colder emotional moments.

A very small selection of scenes feel contrived, such as when Franklin Mitchell — so miraculously — stumbles upon the exact menacing bridge he pictured in a dream. Most of Brown’s stumbles, however, are in clunky metaphors (“Her mother’s arms hung at her sides like a pair of tools the world no longer needed”; “his smile would just appear, like a starling landing on the feeder outside their cabin”). Simplicity and subtlety are what suit these stories most, and the characterization reflects this as well: the characters’ narrative voices, despite their consistently reserved tone, feel distinct and separate from Brown himself.

A Faithful but Melancholy Account of Several Barbarities Lately Committed feels, in the best way, like a collection of journal clippings dug out from the corner of an attic: at turns reverent, bitter, and enigmatic, occasionally sordid, and possibly revelatory for just the right person. Brown’s subtle writing gently brushes the dust off these tales, illuminating for us the secrets and surprising parallels of a family’s complicated past.

Jason Brown grew up in Maine. He was a Stegner Fellow and Truman Capote Fellow at Stanford and now teaches in the MFA program at the University of Oregon. His stories have appeared in The Atlantic, Harper’s, Best American Short Stories, The Pushcart Prize Anthology, NPR’s Selected Shorts, and other places. He has published two story collections, Driving the Heart (1999) and Why the Devil Chose New England for His Work (2007).

Kayla Beardslee is a Creative Writing student at Hamilton College. In her free time, she writes song reviews for The Singles Jukebox and hosts a radio show about pop music on whcl.org.
Share This