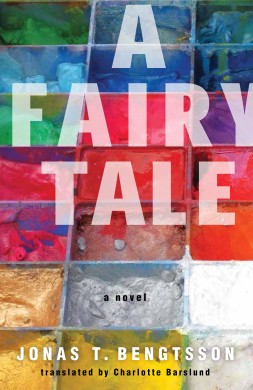 Jonas T. Bengtsson’s A Fairy Tale is set up less as a narrative of linear events (although this is more or less its structure) and more as a series of questions—each with an increasing challenge—offered to the reader. The narrator, who is a six-year-old boy when the book opens, is not the kind of narrator who will lead his reader directly to any answers. What he has are his observations—of his very small domestic universe and of the world beyond that universe when it necessarily interferes. But his observations and how they function, how they jump from say, the gesture of his father removing a piece of tobacco from his lip, to the increasing distance between houses seen from a car window as he and his father drive out of the city, make the reader question what kind of life this boy is living. Where is his mother? What kind of itinerant life is he living? Where do his (many) fears come from? What kind of man is his father? Who will this boy become?

Bengtsson generates an incredible level of tension by posing these questions so slyly through his young child narrator’s restricted perspective. There is a sense of very palpable danger running throughout A Fairy Tale. The narrator’s world is an unsteady one. He isn’t allowed to go to school. He is often on his own for long periods of time while his father works a series of odd jobs, and often must answer to adult and child bullies. They never stay in one place, and are often living in cramped and dirty apartments. Food is scarce or somewhat magically appears in abundance. There are altercations between other people and his father. Ultimately, however, and more than anything else, there is this incredibly protective love between the father and his son.

This final tension—between the very real and gentle and moving tenderness the father feels for his son, and the father’s more aggressive stance toward other people—is where the novel’s heart resides. And where the reader must focus when the story inevitably fractures into two parts, a before and an after. These two parts are defined mostly through the presence versus the absence of the father in the boy’s life. The split comes about through a shocking, although perhaps not wholly unexpected, and violent event, the kind of event a young boy may never recover from.

As A Fairy Tale moves into its second half, the novel’s questions begin to change. The boy—first a teenager and then a young man—must face the world with his unusual past as a kind of horrific baggage. On the surface, our narrator has taken a few decisions that seemingly give him a measure of control over his life—he lives alone under an assumed name, with a purchased passport and identity card. Despite his academic skills, he works as a mail sorter at a postal facility and practices his drawing and painting (his singular passion) in the evenings. He has few friends, little experience with women. In this second section the book moves outward quite a bit, brushing over certain social questions related to contemporary European society. Ultimately the narrator’s identity is up for debate and this is a question that can be asked in a number of different ways. It’s a neat trick, and it gives a wonderful texture to what is otherwise an extremely personal storyline.

If the novel presents a challenge for some readers it will be in this second half when the device of a child narrator—and the tension created by what he witnesses but cannot control or sometimes understand—is no longer possible. Yet the narrative technique remains fairly stable for both halves of the novel. This is a character who witnesses, who does not act. This emotional flatness can make it hard to know in which way the tension is moving. Just who exactly is he becoming? How will he approach the world? How does he feel? Does he feel?

There is, I believe, a really fine line between representing the effects of a childhood trauma in an adult character by focusing on their closed nature and creating a character that is wholly and entirely shut-off. This is the risk Bengtsson takes with his chosen narrative style. Now, there are moments in which he succeeds brilliantly, when the layering of the narrator’s disconnected observations and movements creates a visual representation of his escalating emotion or his trauma-based reticence:

I get dressed and go outside. I walk and I keep on walking.

I walk until my calves ache, until my feet are flat and too big for my shoes. I walk in circles within the Ramparts. I buy a hot dog from a stand. I take a few bites before I throw it in the trash.

Just before eleven o’clock I stand in front of the sorting office. I walk in with the others; I find the supervisor and ask him if he needs me. He looks surprised and tells me that my shift isn’t on tonight.

I ask him if they can use me on one of the other teams.

The supervisor looks as though it’s the strangest question he has ever heard.

That night I work a shift where I know no one and nobody knows whether I always look like I do now.

But there are also moments, like this next one, that flatten the novel’s emotional current entirely.

We get back in the car and drive through an area that’s neither town nor country. We pass a gas station, a crazy golf course, and the ruins of a hotel my grandmother says burned down a couple of years ago.

We join the motorway. My grandmother drives in the middle lane, still going at her own pace. The speedometer never goes above 70 kmh. If she sees the cars behind us, she isn’t bothered by them. Twenty minutes later, we turn off and drive down towards a large, square concrete building. Inside, the light is dim; there’s a newsstand and a hairdresser’s with their opening hours displayed in the windows. We follow blue arrows along the floor down a hospital corridor and take the elevator up.

This is a stricken narrator, completely frozen, completely shut-off, and it is the one that Bengtsson tends to rely on in the adult section of the novel. In fairness, in a scene like this one, when the narrator is moving toward information regarding his father (this is his paternal grandmother, a woman he has only just met), it becomes extreme. It could be seen as a reversion to childhood, to those early pages when the narrator experienced a complete lack of control. And this may be what Bengtsson intended, but there are nearly 170 pages of this petrified adult narrator to follow before the novel arrives at the beginning of its dénouement, when he allows his narrator to feel again, to answer some of the questions the reader has still been harboring.

Ultimately however, despite these issues of style and their impact on the novel’s emotional movement, A Fairy Tale is as gruesome and as romantic as its title might suggest. Remember, this is a love story. An unusual one, for sure, but a profound one. The novel’s first and last question remains tied around this notion of a father’s love for his son and a son’s love for his father. That question trumps all discussions of characterization and prose style—and Bengtsson answers it with much daring and quite a lot of grace.

Jonas T. Bengtsson has published two previous novels: his 2005 literary debut, Amina’s Letters, winner of the Danish Debutant Award and BG Bank First Book Award; and Submarino, the film adaptation of which took the 2010 Nordic Council Film Prize. He has also received the P.O. Enquist Literary Prize and was nominated for the Weekendavisens Literature Prize. He lives in Copenhagen.

Charlotte Barslund was born in Denmark and has lived in the UK since 1984. She has translated novels by Peter Adolphsen, Karin Fossum, Per Petterson, Carsten Jensen, Sissel-Jo Gazan, Thomas Enger, and Mikkel Birkegaard, as well as a wide range of classic and contemporary plays.