A Curious Land: Stories from Home by Susan Muaddi Darraj 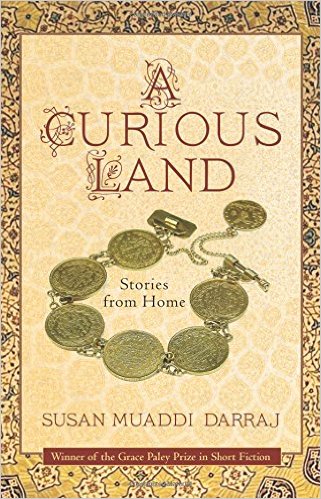 A Curious Land: Stories from Home is a collection of interconnected short stories, set primarily in Tel al-Hilou, a village in the West Bank in Palestine, spanning almost a century. A small church with a pock-marked statue of the Virgin Mary stands tall as if in protection over the village inhabitants. Some have been buried in the rich soil of the village, others have migrated to the U.S., Europe, even South America. Armies march across this beleaguered land, men are killed, while the inhabitants of Tel al-Hilou live lives full of pain, laughter, childbirth, marriage and death. As one character puts it: “Everything changes, nothing changes.”

A Curious Land is based on the lives of the villagers. There is twenty year old Amira, who decides to forego a life with nuns to marry a widower with three children. There is Emad, an unlucky lover pining for the girl of his dreams, and teenager Jamil who finds four Israeli soldiers sitting on his roof one morning urinating in his water tank.

Some stories are lighthearted, as is Jamil’s secret crush on his neighbor Muna while war rages on:

Jamil napped, not knowing what else to do until dinner, but his thoughts were filled with Muna: Muna next to him in algebra class, Muna secretly holding his hand under their white robes during their confirmation ceremony, Muna being attacked in a jail cell by a soldier wearing thick black boots, Muna collapsing into his arms after he’d broken in, kung-fu style, to rescue her.

Other stories are full of pain. A young Raed escapes after an accidental killing that takes him from the West Bank to Guatemala to Texas, unable to free himself from guilt:

I thought he was going to start crying, and I held my breath.

But he didn’t. Instead, he suddenly thrust both hands deep into the vine and pulled, and he screamed at the top of his lungs. A roar that came from deep within him, filled with – anguish. And I felt my own tears climbing up inside my throat, as he stood there, wresting with the old vines and roaring.

Still other stories are of hilarious or larger-than-life characters like the mother-in-law who gossips all day long or a priest who has affairs with married women:

I do know, I’ve seen his fine silk shirt, his eyes rolling towards every woman in a skirt. How he turns his “Our Father who art in heaven” into a flirtation.

These are stories of love, of hatred, of struggle and of faith. The church looms large in their hearts as it does in this entirely Christian village: “the inside painted yellow, the color of the sun … tall windows, six on each side for the twelve apostles, each shaped like a teardrop, the glass so old it was permanently fogged.”

The one recurring character, in person or in mention, is Miss Salma. A long-standing spinster, we learn about her life and trials only when she is an old woman, and we weep along with her for everything she has seen the village go through from her birth to her death:

That was when I made these walls my fortress, because I was the only one strong enough to last, to conquer the things that subdue other people, and I removed the wire and loop from the roof door, and I come up on this roof whenever I want, alone, after an evening spent on the book, and watch the moon and remember you.

Of course, the Israeli occupation isn’t far from the reader’s mind throughout the collection, but we get mere glimpses of it: a new building each year on the far hill, the check posts, the guards on the way to Jerusalem. It is there in the metaphors the author uses:

Mrs. Farah’s body was heavier than an IDF tank, but her tongue could dart more quickly than the feet of all the members of the Ladies’ society.

The inconveniences and the tragedies faced by the Palestinians are mentioned as backdrop, when a village boy is killed at a protest, or a woman returning home from America is searched for hours at the airport. The politics are woven into the stories, bringing home to readers the way of life in Palestine, a diminishing place on earth:

The few buildings my father was talking about are now an entire city, on the hilltop opposite this one, on which Tel al-Hilou rests. In the last sixty years, they have not stopped building, and the fences are now walls, topped with barbed wires and lookout posts around the perimeter, the walls are so high, so they don’t have to see us and can pretend we don’t exist.

The book is not based solely in Tel al-Hilou. A few stories take us further from the homeland, as both men and women flee the village for better, safer lives. From thousands of miles away, their lives are still intertwined with those who are left behind. There is a sister in Michigan, sons in Guatemala, a daughter in New York. We go back and forth, see the landscape change through the eyes of young and old.

A Curious Land humanizes a political situation, offering the reader a way to understand the steady settlement activity of the Israeli occupation through the eyes and ears of the inhabitants of the villagers. The human toll of occupation, the struggle of everyday people who emigrate for safety and security, and the families they leave behind – all are vividly brought to life in this collection.

Susan Muaddi Darraj’s stories, essays, and reviews have appeared in New York Stories, Orchid Literary Review, Banipal, Mizna, al-Jadid, and several anthologies. Her previous short story collection, The Inheritance of Exile, was honored by the U.S. State Department’s Arabic Book Program. She is a recipient of an Individual Artist Award from the Maryland State Arts Council. A Philadelphia native, she currently lives in Baltimore.

Saadia Faruqi is the author of Brick Walls: Tales of Hope & Courage from Pakistan and editor-in-chief of the Blue Minaret Literary Magazine. Originally from Pakistan, she now lives in Houston, Texas with her family.