30 Under 30: An Anthology of Innovative Fiction by Younger Authors 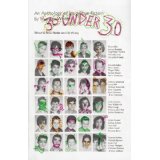 From its very title, 30 Under 30: An Anthology of Innovative Fiction by Younger Writers seems intent on exploding the notion that our literary age is a literary age made safe and over polished by an overabundance of MFA programs, How-to-Write texts, workshops, and writers’ groups. This emphasis on youth and innovation announces an almost political or revolutionary act, the heaving of experimental and raw texts into bookshops and classrooms not only disposed to promoting the literary status quo, but unaware that there exists any other option. Most shocking then is that this is not an anthology populated by abrasive and difficult texts, so much as with works exhilarated in their freedom from convention and restraint, works that appeal to and court the reader even as they seek to destabilize.

One of the more immediately and thoroughly appealing stories is Shane Jones’s “Black Kids in Lemon Trees,” a small masterpiece of lyricism and absurdity, a story without characters or context, a tale involving cops stuck in clouds, shooting at clouds and leaping onto passing planes to escape before seeking the assistance of black kids in lemon trees to help them down. The plot itself is slight and is almost unimportant though, as unimportant as character names or exposition, against the raw wonder unfolding on the page:

When it gets dark, the flames from the world below make the clouds glow orange. We take turns placing our guns in our mouth & pulling the triggers. Our cop heads explode across the night sky, our blood spots stars. Our uniforms become origami birds that can’t fly because the corners of their wings are burning. In the morning, when we wake, our heads are back & attached. Our blue uniforms complete with badge & hat are clean and pressed.

Here Jones’s transformative language performs an act of alchemy, rendering a scene of violent horror anew into a moment of magic and rare beauty. The reader is awed and swept along entirely unaware or uncaring that so much of a conventional tale is missing entirely.

Todd Seabrook’s “When Robin Hood Fell with an Arrow through His Heart” takes an almost opposite route, inviting the reader into the story not only with the promise of a familiar tale and characters but a language as muscular and exhilarating as Jones’s, albeit more concrete and realistic:

The back of his Lincoln green tunic has rotted into the bark, and insects have burrowed into his spinal tissue. Even though he is still alive, a colony of ants slowly excavate one of his lungs, their procession funneling into the hole between his ribs and carrying out pink chunks of sponge and cartilage on their backs. We watch them move over the leaves and disappear into the black ground.

Once the familiarity of the object has been established, however, Seabrook’s text busts apart until the paragraphs have become near stanzas while other paragraphs are further devastated until they more closely resemble an e.e. cummings poem. Still other pages find their text mashed into black smears or in layers of mathematical equations. Even the language itself is destabilized, slipping back into history, spelling when as “when” in one paragraph and the archaic “whyn” in the next.

Other writers delight in mixing genres. Beth Couture’s “From Fur: an Autobiography” fits the expanse of a novel within a work of short fiction, condensing chapters into paragraphs, telling the story of a girl born covered in fur, the abuses she suffers, and finally her journey she takes with a giant and a man covered “with tattoos of …. the ghosts of all the people he has ever loved,” a brief tale of only a few pages that is both convincing and moving in its vastness. Later, Kathleen Rooney and Elisa Gabbert’s “City Walk IV” seems less of a prose fiction than it is a series of poems assembled into brick-like shapes:

Alcohol is a disbiotic It will cleanse you Concrete angels flank the bank building Pictures of random sexy people taken with my camera phone Leaves speared into the sidewalk Visible testament or invisible testament I despise my defensiveness Fine rain falling from an apparently cloudless sky We look small from up there This year is a sense year I hate my knees Dulcetly, dulcetly I trip in the street Cities, I heard, make space timely

A stream of consciousness narrative appears, thin, gaseous, and the reader is nicely carried along into the next.

Sean Kilpatrick pushes prose/poetry confusion to its extreme in “Gangrene.” Here the extremity of style is matched by the horror of its depictions: “I was a chore of gangrene headaches./ Several thousand maggots watched me/ through a magnifying glass./ I faked being wet for their entertainment./ I was convicted of drawing my own chalk outline.” The appearance of this innovative fiction is, if anything, that of a poem, but within this anthology such distinctions contain little merit or import.

This becomes increasingly clear when later stories entirely emphasize the appearance of their texts, such as Zach Dodson’s “I Wrote to You of This” which seems to have been composed by pencil in a notebook, or in Adam Good’s “Guided Walks,” which seems composed on a spreadsheet. The reader may want to scoff or degrade these as mere gimmicks. However, what is clear by their inclusion in this anthology is that gimmickry is of less interest to these writers than opening themselves to the potential of possibility, closed off to no risk or chance, whether a potential success or a potential failure.

Appropriate, of course, because we are told that it is in youth we are most adventurous. An aging revolutionary is a capitalist, after all. One must wonder then, is 30 Under 30 a collection of snapshots, a yearbook of youthful experiments, or does this book indeed hint at the future of fiction, a genuine drift toward what will come next? Age need not bring an end to enthusiasm and ambition. Robert Coover, after all, has increased in adventurousness with each decade. Markson was at his most innovative in his twilight. Sorrentino also continued to innovate and push the novel form. Of course, we cannot be certain until hindsight has given us the evidence, but one can hope these writers continue to push and innovate and do not allow their revolutionary spirit to ebb and fade with time.

Robert Kloss is the author of How the Days of Love & Diphtheria (MLP NEPHEW, 2011) and The Alligators of Abraham (MLP, 2012). He can be found online at rkbirdsofprey.blogspot.com.