Why We Never Talk About Sugar by Aubrey Hirsch 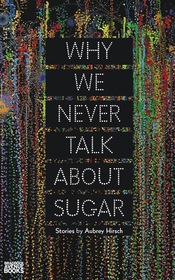 This debut finds itself suspended between reality and perception. Why We Never Talk About Sugar is a collection equal parts science and superstition, an experiment with fact and fabrication that constitutes a sensory literary formula.

Through the collision of what we know and what we believe, a magnetic energy is released. In the hands of an emerging writer like Aubrey Hirsch, the result is a charming concoction. Stories boast titles like “The Borovsky Circus Goes to Littlefield,” “Hydrogen Event in a Bubble Chamber,” and “No System for Blindness,” and feature earnest characters somehow making sense of things within an “architecture of untruths.” But the dishonesty at work isn’t so much about proof as it is perception; the elephant trainer exiled in Texas, the first-year physics student confronting ennui, and the daughter of an MS patient seeking her own recovery through good fortune are all driven by an affective philosophy capable of rationalization.

Much as reality and intuition come into conflict, the book’s people and places establish the interface from which Hirsch investigates a willingness to be deluded by both an emotional and external environment. Yet while the author deals in “curving white lines,” the “little dots” that confine her characters are unyielding and rigidly defined. The American expatriate in Seoul, who’d “been dreaming about leaving . . . [the city] too crowded, the air too filthy, the food too spicy or sour,” but who is unable to endure a plane ride back to a decidedly less glamorous Ohio on account of his newfound addiction to Korean clove cigarettes. The stranded circus performers—natives of India, Nigeria, Russia, China, and Austria—who are temporarily housed alongside their props and animals in a decommissioned women’s prison on the outskirts of a rural town. The family members presided over by a disease that manifests as erratic yet resolute. And the residents dependent on Maliseet Lake, which simply disappears one morning and in so doing embeds a community in its own humiliation. Yet, luckily for the reader, the characters of these stories decide that they don’t risk much by being misled, and continue to follow unpredictable eddies.

In this collection, where the combined elements willingly react, the results are potentially combustive. Even in small doses, as is the case with “The Snakeskin” and “Pinocchio”—each spanning no more than three pages—symbolic and mythical additions lace the mixture with insecurity. In the former, a high school is invaded:

The snakeskin is huge, as snakeskins go. It is at least four feet long. The students see the pattern of scales running across its back. They see its slow taper into the tail. There is a tattered opening where the head should be, but other than that it is in one exquisite piece.

What cannot be determined from the foreboding relic is how students will respond to what—“too big for that skin”—now moves freely among them. The grim discovery portends a transformation surpassing adolescence; and the four smaller skins later uncovered speak to a sense of self that shifts prematurely, locking itself into place as students “stalk through the hallways with their eyes glued to the tile floor.”

Whereas the snakeskins provide a colliding dose of superstition in a hyper-realistic setting, Pinocchio is all too aware of his own fabled realization. It is his inner composition that Pinocchio is desperate to free, the firm sense that his father Geppetto “guessed wrong when he picked up this particular piece of pine” and crafted a boy—that what Pinocchio “really wants to be is a woman.” He dreams of her, “a curvy blond with full pink lips . . . wishes he could have her soft skin and long hair,” but above all he desires for his father to recognize that his conception was as cellular as it was instinctive.

When working on a biological level, the author is at her best. Analyzing a disease that destroys physically and emotionally, Hirsch includes in her volume two stories that examine multiple sclerosis from a child’s point of view. Though near-grown, the daughters in “Strategy #13: Journal” and “No System for Blindness” are each thrust into the role as caregiver for their ailing father. An illness particularly cruel, MS robs patients of their sensory, motor, and mental function, as well as a host of other markers of independence and dignity; that the disease is imperceptible to the naked eye until it affronts one’s faculties does not go unnoticed by Hirsch, who renders her girls as shadowed by a systematic sickness. And it is here that the author’s affect slips, her focused misery a mesmerizing evocation that challenges perception of her familiarity with her subject matter. What is fact? What is fiction? What does it matter, if it makes the reader feel?

Unfortunately, Hirsch isn’t wholly successful at maintaining this equilibrium. From an editorial standpoint, many stories would benefit from a paring down of at least one internal sentence and several words to a full phrase from the final line. In a collection that qualifies itself as an established blend of magic and math, not every result requires quantification. When all other components of the formula balance, as is the case with Why We Never Talk About Sugar, a less rigorous accounting seems the solution.

In the case of the final and title story, however, precision gives way to passion. When “reproduction had become divorced from sex, and now required only love,” women became pregnant with the objects of their desire: watches, chocolate, and buttons are all nurtured in formerly vacant wombs. But danger lurks, in that love proves itself as uncontrollable as lust and leads to dangerous pregnancies and a society that grows averse to emotion. Even philosophical reflection and an appreciation for beauty become hazardous to women, whose “flat bellies became a sign of [their] self-control.” And it is here that Hirsch abandons her measurements and relies on her own estimations, releasing herself in the same way that she does her character’s sister who, “After years of teaching herself to love in a world that was becoming increasingly loveless . . . became pregnant with a set of antique sugar spoons.”

Like the “grainy ultrasound” that reveals an implausible pregnancy, the “picture of subatomic particles, through an electron microscope,” and a host of naturally occurring yet largely unstudied elements, Why We Never Talk About Sugar is comprised of chemicals that under the spell of Aubrey Hirsch react in phenomenal ways.


Aubrey Hirsch is a native of Cleveland, Ohio. Her stories, essays and poems have appeared in literary journals both in print and online including American Short Fiction, Third Coast, Hobart, SmokeLong Quarterly, Vestal Review, The Los Angeles Review, PANK and Annalemma. A three-time Pushcart Prize nominee, she has also been honored as a runner-up for the Micro Award and as a top-25 finalist in Glimmer Train’s Fiction Open.

Erin McKnight is the publisher of Queen’s Ferry Press. Her own writing has been nominated for W.W. Norton’s The Best Creative Nonfiction and the Pushcart Prize, and her reviews of poetry and fiction titles can be found in multiple venues, most recently The Dallas Morning News.