The Whiskey Baron by Jon Sealy 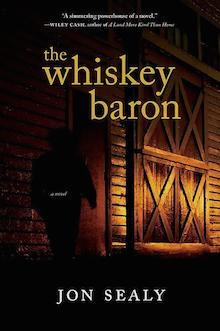 Read enough Southern Literature and you’re bound to recognize more than a few of the trademarks of the genre. Read enough of the hackneyed, contrived version of Southern Literature and you’re bound to be introduced to a clichéd and derivative rendering of the genre, one that milks every chance to wring a little more out of each stereotype or that adds nothing to an already stale and outdated character archetype. But read a piece of Southern Literature that attempts to do more than simply rehash what’s already been done, and you’ll be reading something akin to the debut novel by Jon Sealy. The Whiskey Baron doesn’t reinvent Southern Literature nor should it face charges for its failures to do so. By this point, reinvention is largely an impossible task, given the groundwork laid out by the earliest practitioners of one of American Literature’s most productive and imaginative regions. But while reinvention is largely an unattainable goal, reimagining is not, and The Whiskey Baron finds Sealy renewing some of Southern Literature’s finest traditions while conceiving a unique and well-researched story of an era and place not much covered in the ranks of the genre he so rightfully has joined.

From the title alone, one should be able to gather something of the central complication in Sealy’s tale. Two men have been found shot to death along a stretch of highway that just happens to pass in front of a not-so-secret distillery. Given the Prohibition-era setting, Sealy introduces two immediate conflicts in the early pages of The Whiskey Baron — the double murder and the unlawfulness surrounding local baron, Larthan Tull, and while the events that follow play out largely as one might expect, what works to Sealy’s advantage is that the novel’s initial conflicts tend to take a back seat to two of his greatest attributes as a writer: his characterization and his attention to place. The novel unfolds in a way that allows Sealy access to the perspectives of several characters and their viewpoints on not only the murders, but on the economics and social class structure of the rural South Carolina setting. The novel succeeds in capturing the tone and perspectives of many of the locals, from the baron himself to a young man who lusts after the baron’s daughter while at the same time abetting the escape of his uncle, the primary suspect of the double murder and main target of Larthan Tull’s ire.

In Tull, Sealy has created a villain not unlike many of the Devilish types populating the Southern Gothic landscape, but even in his recognizable wickedness he remains a fascinating study due to Sealy’s ability to portray the specificity of his corruption. When two federal agents descend upon Castle County to aid in solving the murders, they question Tull about the rumors that the two men shot dead may’ve been running a competitor’s whiskey into North Carolina, and that upon learning this, Tull went out of his way to engage in revenge. To Tull, these events add up to a great big coincidence, and getting nothing else from him, the agents leave Tull’s establishment, but Sealy lingers, giving readers the sort of insight into character that emerges throughout the novel:

Tull watched them from the window and grinned. This was what he lived for, life under the American rug. Yes, coincidence does indeed run the world. It explains why one man ends up behind a bar while another ends up in front of it. Why one man makes liquor, another man drinks it, and a third altogether tries to put a stop to the operation. Coincidence explained how Tull wound up here, snarling behind a cigar and smug in the knowledge that the two federal agents couldn’t do a thing to him. The knowledge that he was above the law.

While many citizens of Castle County toil for hours in cotton mills, scraping as much money together as possible, Tull remains a character largely defined by his selfishness. He claims a love for his daughter but describes her mother, a whore, as simply “a bus stop on my way to Castle.” And as he contemplates the possibility of the worn out county sheriff coming to shut down his business once and for all, Tull can’t help but think that despite people’s misgivings, he holds a great value to all those who might consider him immoral:

What they didn’t realize was that they needed a man like Larthan Tull. He alone was willing to take on the responsibility of providing liquor to Castle County. It gave people a release, without which the county would have far bigger troubles.

A sinner may find it easiest to downplay the sin as nothing but a favor to those in need, and for Tull, easily Sealy’s most interesting and thought-out character, his desire to live “under the American rug” and to lurk beneath the goodwill of mankind, gives The Whiskey Baron the sort of constant dread that makes for not only a tense thriller but an astute literary examination of character.

Another satisfying element of The Whiskey Baron comes in Sealy’s familiarity with setting. Readers will most certainly appreciate what appears to be a great deal of research in regards to Prohibition-era mill communities and the concocting of whiskey, and to Sealy’s credit, none of this material ever appears to be added without careful consideration of the developing storyline. Information is folded in naturally, providing an authoritative voice that does a great deal to settle the reader into novel. The same can be said for the descriptions of place. Throughout the novel, Sealy dazzles in his precise details of the landscape, and as any strong fiction writer does, he manages not only to paint a realistic portrait but establish a clear relationship between character and place:

The end is coming for all those here, this town, this world, this life one leaf in time’s great history, and the autumn would soon arrive. The leaf would flare in one bright and beautiful last gasp before withering to its dry remains and falling to the earth. Despite new buds, new leaves in the years to come, this world would decompose into a roux of old matter long forgotten, waiting for a new beginning.

In passages like this, Sealy artfully confirms a unity between person and place, and while other sections of the novel corroborate Sealy’s knowledge of the South Carolina Piedmont, nearly every instance of place is blended in some way to the development of his characters.

Like many first novels, The Whiskey Baron may strike a familiar tone and read too conventionally at times, but such issues are not so much problems as indications of a novelist revealing a steady hand and establishing a foundation on which to grow. One would expect, given what he has achieved with one novel, that Sealy has the potential to add to an already fertile literary landscape.

Jon Sealy’s fiction has appeared in The Sun, The Normal School, and PANK, among other places. A native of upstate South Carolina, he currently lives in Richmond, Virginia. This is his first novel.