The Sorrow Proper by Lindsey Drager 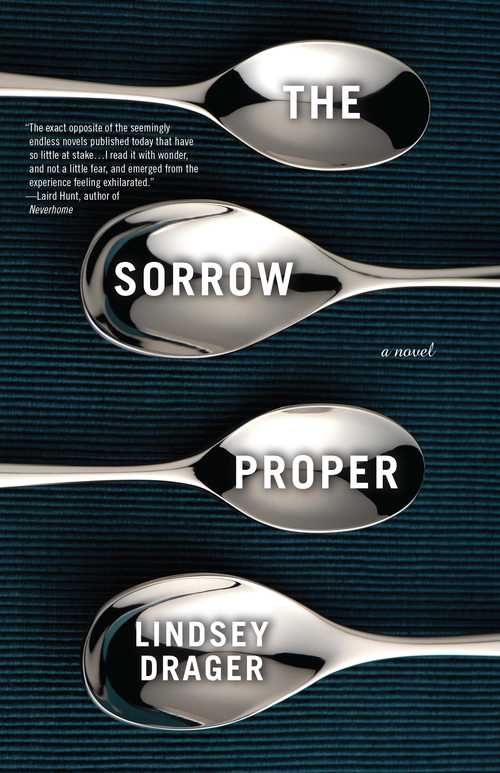 The Death of a library is slow. Books are pulled from the shelves in an order like teeth leaving the mouth.

The Sorrow Proper by Lindsay Drager is a quiet novel of great precision and fine beauty that should be read properly in a quiet library or improperly in a quiet bar surrounded by a chorus of librarians who are mourning not just the shuttering of their library but the loss of the book as it succumbs to digital data. Drager writes:

A library might only be deemed such if there are books inside. What, then, is the function of the building that stands bookless, other than to amplify the echo of dead birds collecting on the windowsills?

But this book would have us remember the halcyon days when there were libraries and there were books and there were those who loved those books and they were called librarians. So sings the chorus of librarians who alternately dismantle their library of books, forced by budget cuts and a changing demographic, and meet for drinks at a bar where the kindly bartender looks them over. They try to put into words what is so impossible for them to say: the library as they know it is going away.

If this isn’t sorrowful enough, a child (referred to as “the Bronson girl”) is on her way to the library to borrow a book when she is struck down and killed at a crosswalk without a stop sign. One librarian, Avis, witnesses this moment. Later, When Avis and her librarian friends discuss the meaning of grief, she:

reminds them all about the Bronson family … that they continue to make their beds and tie their shoes and watch it rain but they are hoping for a day that provides different results. … That is the thesis of grief, she tells them, and at the end of the day, isn’t that what we spend our lives doing? Grieving for the past, or the future, grieving for the people and the places, the ideas we do not have, whether we once did or never will.

The Sorrow Proper weaves two stories together: the closing of the public library and displacement of librarians whose love of books is felt to be nostalgic rather than real; and the mysterious love affair between a deaf mathematician with a passion for sensuous experience and her husband, a photographer, whose photos of her spoon collection speak the thousands of words that pictures say. His words to her are not spoken and barely signed but rather are written upon her flesh. The deaf mathematician becomes the page upon which the silent photographer inscribes his language:

when the photographer would write on her body, he admired the way it lingered for days, fading slowly, working toward erase. The night before he finds the deaf mathematician in the bathtub, he will uncap the black marker and watch the skin dip where the pressure of the tip sits. He will watch the ink split and turn in jagged paths at the borders of each mark, settling into the clefts between the discs of her skin. It will look like a minuscule branching. The sentence will run from the inside of her thigh up and around the thick of her rear and end in the small of her back.

The Sorrow Proper raises and attempts to answer with great precision questions like: what do the bones of the skull frame? What does the frame of a picture exclude? What does the shutter of a camera instantiate? What is silence to a deaf person? This book also addresses mathematical abstractions by exploring the myriad branchings of choice, the paths taken and not taken, which produce an infinite array of alternate realities that might have been. The deaf mathematician tries to explain this to her lover:

We each die an infinite number of times … because for every decision we make, all the decisions we don’t are being carried out until the future branches forward so complexly that the paths have to curve and fall around each other and the potential is endlessly dense because every singular line births thousands more and at the end of each line is a death so that we are dying always, everywhere, and what we come to know as our real death happens like a pixel on an unframed screen, so minor and forgettable, it may as well be void.

These words themselves call to mind the opening lines of T. S. Eliot’s, “Burnt Norton”:

What might have been and what has been
Point to one end, which is always present.

The Sorrow Proper is closer to a poem written by an intellectual poet like Anne Carson than it is to a novel. It is also, possibly, closer still to a precise philosophical micro-treatise that renders countless variations on the meaning of absence as it relates to the different properties of grief. Drager is as much a thinker as she is a poet. Although her novel pushes into mathematical thought, she manages to tie all of it back to the theme of grief, or sorrow, that is the object of this novel and what gives The Sorrow Proper its emotional resonance.

Joseph G. Peterson’s works include the novels: Beautiful Piece, Wanted: Elevator Man, Gideon’s Confession, and the short story collection, Twilight of the Idiots. He lives in Chicago with his wife and two daughters.