The Sky Conducting by Michael Seidlinger 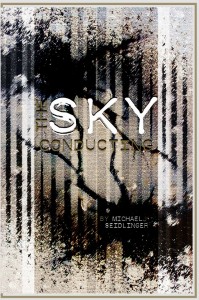 I’ll admit, the way for an author to get me to put down a book is to tell me how to read it. I’ve even committed the sacrilege of being pissed off at Alice Notley’s The Descent of Alette,” target-“blank” with its frontispiece stating that idiot readers have been reading the book wrong and directions for how to read it “right.” Even thinking about that Author’s Note makes me grind my teeth and reach for a cigarette and unfairly hyperbolize the actual wording of that note. Which is all to say, I was, ahem, annoyed in an indefensible way by Michael Seidlinger’s suggestion for how to read _The Sky Conducting :

At the end of each grouping there is to be a stop, an exhale, followed by another inhale. Do not exhale until you reach the end of a grouping, marked by this, the solemn, falling icon of an American home.

To say that this book is one of many that entertains notions of dystopia and a kind of apocalypse or post-apocalypse set in a vague near-future is to ignore the brilliance of this book: its setting can only be our present. America, a character in the book, the America that has a heart attack and has suburbs where, “The houses were vacant but occupied,” the America that, “took with it the dreams and appetites of ambition and promise from all Americans,” can only be our present.

The thing about America, the dream is everything and nothing. The dream started big and then was crushed systematically until the dream was just not being poor.

The Sky Conducting is a novel prescient of our present. It is a novel about America, about a nuclear family that is every family, about a family’s journey to an ending place that, although permutated, is almost exactly where it began, a kind of horrifying primordial loop.

It was almost impossible, and I mean this as a great compliment, to not think of Bad Religion’s entire oeuvre while reading this book, and specifically their album Suffer.

But even as I wedded the book with the band, I listened not to Bad Religion as I read, but “Adagio on Strings op 11” by the Philadelphia Orchestra. This was not planned; I needed to block out the white noise of life as I read, and this piece, with its momentous things that music does that I don’t know the names for, seemed, to me, the perfect soundtrack. And then I remembered: this song is the soundtrack to Platoon.

Perhaps we need a twenty-second time-out so I can provide a mental map for my reading of this book: I am simultaneously reading the novel, and thinking of Bad Religion, and listening to “Adagio on Strings,” and then watching Platoon as I write this review, and then thinking “Holy Shit,” when Charlie Sheen says “Feeling good’s good enough,” in the film, and watching the novel and thinking only of the film and thinking, “Oh my God,” when Tom Berenger’s murderous Staff Sergeant Barnes says, “I am reality,” and thinking of the line in the novel, “If someone is daydreaming, reality walked up to that person and slapped the person in the ear,” and then thinking of the graffiti on the empty parking garage I saw as we approached downtown Detroit last May that said: “Welcome to the Haunted Central District.”

All of what I’ve just said is true. And most of these places readers are sent in their own minds as a consequence of reading happen solely at the beginning. The book sets the stage this way, and then hypnotizes the reader into reading faster and entrenching themselves inside the story and then reading faster and then you can’t read it fast enough. That note at the beginning, on how to read the book, the one that made something in me cringe, well, it’s right. Seidlinger was right to remind you to breathe while you read, because what he does in the novel will make you forget to breathe.

I should say more though: Seidlinger directly references Cormac McCarthy’s The Road in a way that creates a gulf between the two books so the instinct to link them is rendered irrelevant: the gulf between them is as wide as the gulf between a novel and a novel that is infected with the present; The Sky Conducting makes The Road seem vaccinated by the beauty of fiction.

I should still say more: the family who goes on the journey in the novel, they build golems from mud on their way, to aid them, to quiet them, to lull them back to a parallel present which will be their end. These gollums are a dog, a mug to hold alcohol, the year 1999, and finally, each family member becomes a golem — caked in mud, they approach a house like the one they left, and settle themselves in to dry: in front of laptops, and computer screens, and video games.

They’re helped along on this journey by the mercenary, Johan, the only named character, who leads them on that aforementioned primordial loop, only to get caught in its orbit after he’s sold the family’s corpses.
All of this happens while the book also engages in complicated interrogations of technology and what it means to adapt and what it means when the word loses all meaning.

Michael J. Seidlinger is a writer. When he isn’t consumed with language, he’s transforming into a graphic artist, musician, or boxer. When he’s not doing that, he’s turning into somebody else.

Jess Stoner’s novel, I Have Blinded Myself Writing This (Short Flight/Long Drive Books, a division of Hobart), was published in February 2012. She is also the author of a choose-your-own adventure chapbook of poems, You’re Going to Die Jess Wigent (Fact-Simile, 2011). Her prose and poetry have appeared in Alice Blue Review, Everyday Genius, Caketrain, Juked, and many other handsome journals. Jess currently lives in the sweat and brisket of Austin.