The Silver Ghost by Chuck Kinder 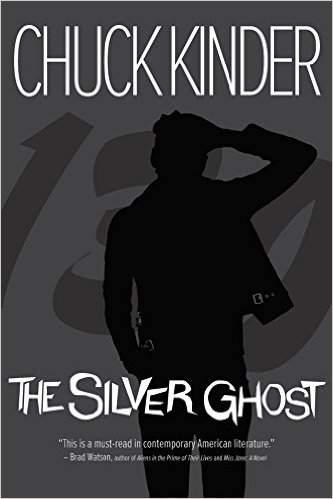 A note on the novel’s journey: The Silver Ghost was originally published by Harcourt Brace Jovanovich in 1979. Kinder’s editor left Harcourt just before the book’s release, and with the move, Kinder’s novel, lacking a push from its publisher, received little attention. Robert Peluso and Jeff Condran from Braddock Avenue Books approached Kinder and asked if they could publish a paperback version.

Most of us are fortunate enough to survive adolescence, and by a certain age, we’re allowed to forget the pains of first love and the post-high school confusion of standing before a wide-opened world. Then there are the less fortunate—the ones who don’t survive, the possessors of horrible luck, the victims of behaviors reckless or self-destructive. And add to these a third category, survivors destined to wear their teenage scars for the rest of their lives. Some of these children were born into horrible realities, and they grew up prisoners of crueler fates. Others, like Jimbo Stark, the main character of Chuck Kinder’s powerful novel The Silver Ghost, were cursed with tender hearts, with longings and desires that cloud one’s better judgment, conditions a teen like Jimbo masks with alcohol and a delinquent’s posturing. James Dean, a hero to Jimbo and many of his generation, had the luxury of dying young. Jimbo Stark was left no such easy exit, his fate to grow old, his teen angst and regrettable choices destined to haunt the rest of his days.

The novel is set in the waning days of the Eisenhower era. James Dean. Television. Rock and roll. Jimbo Stark finds himself adrift on the new sea of youth culture. He is himself, a West Virginia teen, but he’s also a soul lost in the often-conflicting messages of what society says a young man should be. Technicolor images splash across movie screens and, in the background, music the older generation doesn’t understand. Jimbo Stark is a delinquent, the kind of boy who’s both vilified and idolized in this new world of pop sensibilities. He’s starry-eyed in love and ready to duke it out if he has the itch and enough beers in his belly. He believes in true love, at least the notions of true love he’s gleaned from top-40 crooners and celluloid embraces. He invests himself in the currency of his time—switchblades and fast cars and parking in a dark, secluded spot with his girl. He talks the talk, too—the language of a rebel who’s eschewed the establishment’s mores and codes, diction that can sometimes be jarring to the modern ear, but I urge you to trust your captain here and give yourself over to the voice as it was meant to be heard, dig?

But somewhere along the line, Jimbo becomes unmoored. He loses himself in his own confusion and anger, in the influx of images, the movie scenes he remembers and projects himself into, a kindred spirit to James Dean and all the cool cats who don’t accept society’s straightjacket expectations. Jimbo suffers from an acute self-awareness he tries his best to mask, his intelligence matched only by his impulsiveness. Just as surely as he believes in the ethos of macho-cool, so too does he invest himself in the notion of forever-and-ever teen love—stances that will soon be tested by the real world he enters at the end of his troubled high school career.

The novel is divided into two parts. The first is high school Jimbo. The boy is troubled, yes, but he’s also somewhat innocent. We identify with his raw emotions, his desires to find salvation in true love. We laugh with him at times, other times at him. We shake our head over his selfishness and lack of vision. Kinder paints Jimbo’s portrait in a series of scenes filled with the randomness and ramblings of Jimbo’s life—dancing with his girl on a local TV show, duking it out with his rival. Especially touching are the portraits rendered of his parents, two people with troubles of their own. A father who can’t escape the war he was off fighting when Jimbo was a child. A mother with a past, her present dominated by cancer and her hopes of God’s salvation. Jimbo makes it through high school—barely—after scrapes with the law and love. He becomes a man—but with little idea of what being a man actually entails.

Part two finds Jimbo not making the good decisions we’d hoped for. Instead, he’s drawn steadily into a life of petty (and not so petty) crime, a course of action influenced in part by another pop-culture allegiance, his favorite book, On the Road. Jimbo hits the road in a stolen car with a mysterious man who shepherds him into an ever-deepening web of lies and deceit. Jimbo—on the road he yearns for, given the freedom he’s always craved—finds not Kerouac’s liberation of the spirit but rather the darkness that sometimes waits beneath the shine of our dreamed-of lives. The final forty pages turn ominous, an ever-increasing set of stakes, and in a novel full of truly luminous passages, the final chapter is the kind of haunting denouement whose imagery and poetry will stick with me for a long, long time.

The years have claimed much of the world of The Silver Ghost. The lingo, the attitudes on sex and sexuality, the novelty of TV and youth culture—they all belong to the past. Yet what we’re left with is a character just as relevant today as he was in 1960. Jimbo Stark is the embodiment of the confusion and pain of adolescence. He doesn’t ask us to feel sorry for him—yet Kinder paints Jimbo in such a real and unflinching light that we can’t help but care, despite Jimbo’s disdain for our pity. James Dean got to ride his silver ghost into the next life. Jimbo Stark, having missed his exit, is condemned to the slow death of being forced to live with himself and what he’s done.

Chuck Kinder is the author of novels Snakehunter, The Silver Ghost, and Honeymooners: A Cautionary Tale, a memoir, Last Mountain Dancer, and the poetry collections, All That Yellow and Imagination Motel. A native of West Virginia, he has been a Jones Lecturer at Stanford University, a writer- in-residence at the University of California at Davis and the University of Alabama. A long-time professor of creative writing at the University of Pittsburgh, he now lives in Key Largo with his wife, Diane Cecily.

Curtis Smith has published over one hundred stories and essays. His latest books are Beasts and Men (stories, Press 53) and Communion (essays, Dock Street Press). This past spring, Ig Publishing released his latest book, a personal take on Vonnegut’s Slaughterhouse-Five.