The Plum Rains by John Givens 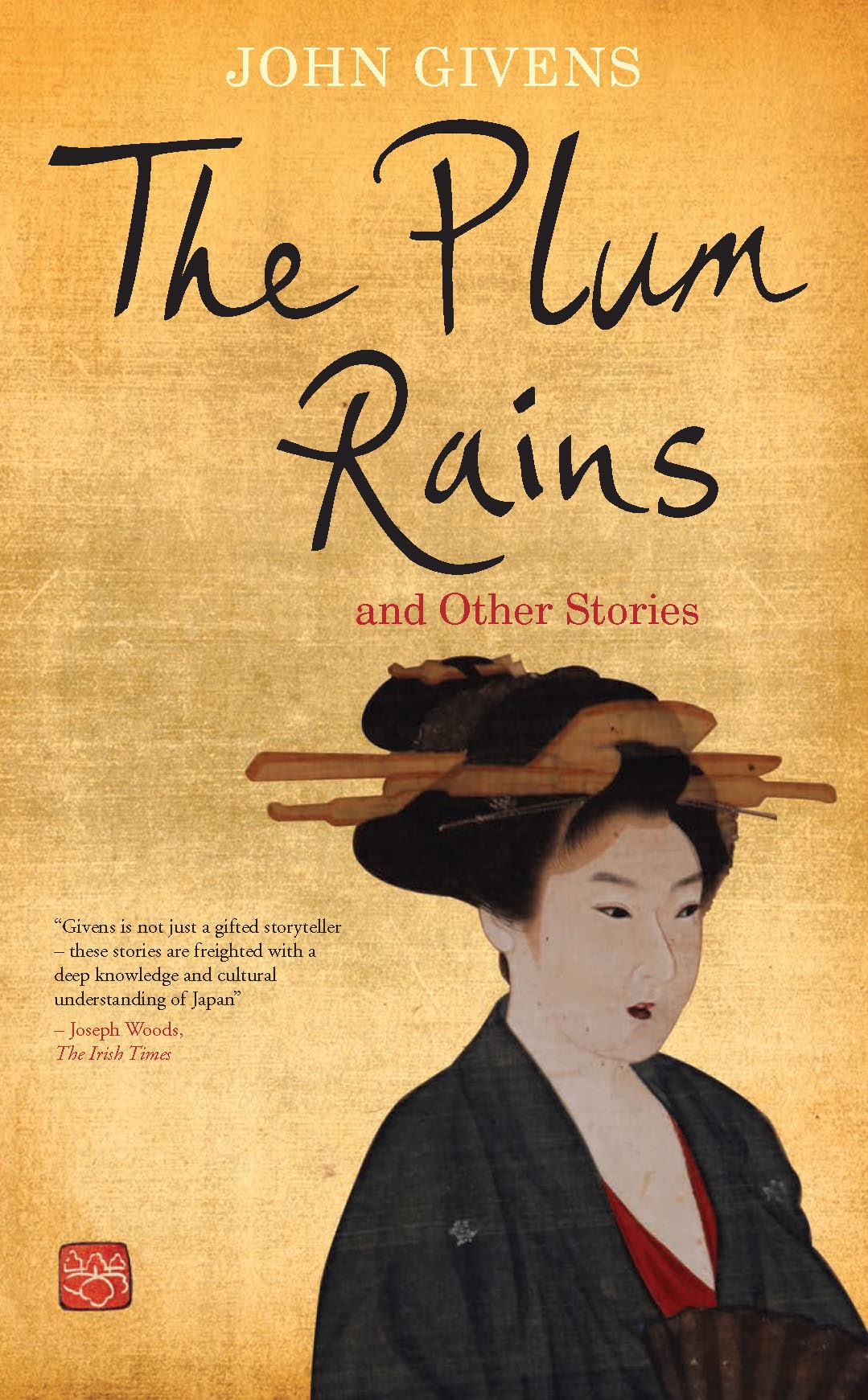 This volume of 200 or so pages is a delight from beginning to end. Beginning with an author’s note and ending with the title story—a climax of all that a non-initiate thinks of as Japanese exoticism. Of the 13 stories, 12 have already been published in a wide variety of journals—“often in very different versions” we are told. One can only imagine the fine-tuning of the very precise prose and the adjustment, perhaps, of character references and chronology made to fit this collection.

The author’s note is helpful: it places the stories in their historical context, that of late 17th century Japan where the end of centuries of feudal warfare meant that the traditional role of the samurai as warriors was no longer relevant. “Some samurai became professional artists and poets, notably among them Matsuo Basho (1644-1694), widely regarded as Japan’s greatest writer.” Basho himself appears in several stories, one of several “linked” characters.

“Some of these stories function as martial tales, and some as modernised versions of Buddhist debate dialogues. The travel narrative is particularly Japanese, and many of these stories portray figures in motion through a landscape. A form unique to Japan is the haibun, a prose version of haikai poetry which evolved out of head notes setting the scene for poems and often seems both discursive and compressed. My aim with these stories is to present a world that while very different from our own, still resonates with the pleasure of what it means to be human” (from the Author’s Note).

John Givens, who lived in Japan for 12 years, shows his learning lightly. His knowledge of 17th-century Japanese society provides a credible background for the non-specialist reader. We are introduced to linked-poetry writing, violent behaviour or the ways of the pleasure quarters through the actions and thoughts of the characters, not by intercession of the author or an omniscient narrator.

What is the collection about? It could have started as “pastiches” of possible stories, as the author says of the poems he created. Why should it appeal to readers? Because the writing is excellent, because historical fiction can certainly be attractive (and these stories are not difficult), because the themes are universal: questions of honour, changing times and behaviour and, fundamentally, life and death. A major concern shared by several characters (and, one imagines, by the author) is the challenge of describing what is —as memory slips in and taints an experience before one can set it down on paper. So, perhaps the essential theme is writing itself.

In the first story, “The Green Summer Wind”, we are introduced to the main character of the collection—not that he appears personally in all the stories but his influence permeates them. This is Old Master Basho. We learn about his life and, already here, his wanderings.

What Old Master Basho wanted was to make statements of his own that could be placed beside those made by men in the past and deserve to be there with them. His journeys were pilgrimages, but his religion was the way of haikai linked poetry. He wandered through remote provinces in order to perfect his manner by testing himself against the austerities of travel, going where his precursors had gone and seeing the world as they’d seen it. But his celebrity preceded him wherever he went, and access to the past became buried beneath the importuning of those living in the present.

He is accompanied by a young disciple “clever with words, a precocious literary prodigy”, Chibi-kun. There is humour and gentle mockery at the behaviour of this youth “postponing the burdens of adult responsibilities”—a tone that recurs in other stories. And already there is the contrast between the foolishness, inexperience and uncompromising attitude of youth and the harsh reality of life, as the travellers come across a child’s corpse on the mountainside:

Old Master Basho knelt beside the bone scatter. He removed his round travel hat and bent forward to observe what proved to be a handful of mouse pups nestled within the cup of the brain case, pink and hairless little newborns, their tiny toes perfect, tiny tails like curved pink filaments, lovely little breathers without a blemish bedded on shreds of the dead child’s garments that had been dragged inside by mouse parents intent on the comfort of their progeny—a delicate comparison with the parents of the child abandoned on the mountainside because he was “the weakest member of a despairing family that had no hope for succour or salvation.”

Each story brings new perspectives to the reader but it is the links within the collection that strengthen it: these are links through the return of individual characters, through continued topics of concern, through the weather, travelling, atmosphere, seasons, styles, colours … Themes include life in peaceful times (what can samurai do?), the adaptation of old codes of behaviour to new times and new opportunities (the rise of the merchant class), the meaning of life itself and of death, writing linked poetry, feelings, old/experienced vs young/foolish or brash. One example of the latter, from “The Plantain”:

The head gardener told the silk merchant that his request was peculiar. It did, however, provide an opportunity for him to instruct his apprentices in the method of setting large plants in winter. You can tell them in words. But they’re useless until they’ve done it with their own hands.

The reader is free to identify many parallels between historical Japan and today’s world.

The main characters are male, with the exception of Little Ohasu, the pleasure provider, whose interest in poetry sets her apart from other female characters mentioned. She is present in four stories and mentioned in another. Hasegawa Torakage the rogue samurai appears in five stories; Kichiji the silk merchant, Viper Koda, Mugen Bonze, Jirobei and Ox Blossom appear in two, as does Chibi-kun.

Throughout, the impact of the seasons is almost tangible, most often the winter cold. The colours are luscious, whether for the traditional transient cherry blossoms or the possibilities of modern fashions: “the inside of his sleeves might show a pale apricot when folded back, a dark cinnabar, a rufous of gold, or even the luscious gleam of ripe pomegranate seeds.”

Why is it that the texts – although written in perfectly flowing English – give a feeling of having been translated? Because the language includes terms that are not current (although immediately understandable) such as “small comfort-fire”, “pleasure providers” or “shame hair.” Because the content of the stories has been translated such a distance from current life? The style is in no way didactic or stilted and the explanations of the conventions of poetry composition or of those of ritual suicide are well integrated, for the benefit of the general reader.

The tone is sympathetic, non-judgemental—even faced by extreme violence. In “The Emptiness Monk”, for instance, after Viper Koda cuts off the arm of a gambler with a pistol whose challenges to a shooting competition have annoyed him:

That shouldn’t have happened like that. Koda returned his too-long sword over his shoulder into its scabbard, the sweep of it sliding home like the sound of a door shutting. But it did.

Black humour is used to great effect, for example, in “The Narrow Road to Dewa,” where a foolish young man messily lives out an old-fashioned dream of killing brigands only to be killed neatly by a “non-human” who applies outdated law, according to his own code of honour.

“The Plum Rains” is the last story in the collection and, as it begins, seems unconnected with the others. It is placed in a new setting, far from Edo and the pleasure quarters of New Yoshiwara. It introduces three new female characters, then a flashback to the history of one of them which links directly to characters the reader knows, including Chibi-kun whose career has clearly progressed since the first story as he is now a popular author. There have been other indications that the stories are, grosso modo, ordered chronologically. Basho is now dead in “Lightness” (a story of compromise that would delight any editor) and Hasegawa travels throughout the collection, seeking the meaning of life and its expression:

Why did the facts of the world seem so unfinished? Why was he still draping the world with words? Still seeing it through them? Why even when he tried to get past the yearning to describe what he saw did he find himself trying to describe the impossibility of description?” (“The Narrow Road to Dewa”).

From the title of the collection, a reader might have expected “The Plum Rains” to be first—and there is nothing to stop the reader deciding on a random approach to the volume. This reader feels that the placing of the title story last is judicious. Its “ritual” violence is difficult to read and might dissuade a squeamish reader, had it appeared first, from the pleasures of the other stories. One would miss so much!

John Givens studied art and Japanese literature in Kyoto for four years and worked in Tokyo for eight years as a writer and editor. He received an MFA in creative writing from the Iowa Writers’ Workshop where he was also a Teaching/Writing Fellow. Givens has published three novels in the United States, Sons of the Pioneers, A Friend in the Police and Living Alone, as well as numerous short stories and poems in a variety of literary journals in the US, Asia and Europe. His nonfiction books include A Guide to Dublin Bay: Mirror to the City and Irish Walled Towns, both published by The Liffey Press. Givens currently lives in Howth, County Dublin._