The Murder of Halland by Pia Juul 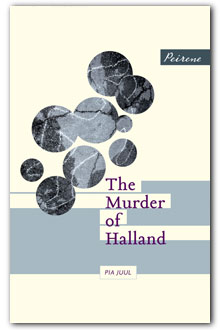 Think of the classical mystery genre that is set in a small town and involves the unexpected murder of a prominent citizen. Now think of this genre turned inside out and upside down, where all of your “mystery story” expectations are set up neatly but quickly subverted. This will give you some idea of what to expect from Pia Juul’s The Murder of Halland — a fascinating and fun and thoughtful anti-mystery.

The book opens with narrator Bess and her long-term partner Halland on what appears to be an ordinary evening. They’re watching a police drama. Then Halland, who must be up early the next day, goes off to sleep, and Bess, who is a writer, ends up working all night instead. Just after she goes to sleep at dawn on the couch, she is awoken by a noise and notices that Halland is gone. Nothing unexpected about this. But then, in the middle of her shower, she realizes that she’s seen his coat and bag in the hall and the next thing we know there is a man on her front porch trying to arrest her for Halland’s murder. This man isn’t a policeman, but he’s reacting to something he thinks he heard Halland say. What follows quickly is a scene on the town square where the body has been found, Bess’s reaction—all she can think of is the daughter she abandoned when she went to live with Halland—and then several conversations with the police.

These initial reaction scenes contain a neat series of set-ups: some expected, some more unusual. As might be expected, a police officer introduces a set of keys found among Halland’s things, keys that Bess cannot identify. And yet Bess isn’t interested in these keys at all, and readily admits this to herself: “Anyway, what did I know about Halland’s life outside this house?” And of course Bess’s reaction to the first news of Halland’s death is strange, this focus on the daughter she abandoned instead of the lover she’s just lost, but then what about grief is normal? Bess herself is intriguing from the start; she seems uninterested in searching for Halland’s murderer, but is convinced she is about to be murdered herself.

I clasped the unfamiliar keys in my pocket as I criss-crossed the narrow streets. Suddenly I heard a car behind me. This is it, I thought. Now they are going to run me over. What will death feel like? Will I scream or fall silently? But nothing happened.

Moving forward from these early “murder set-up” scenes, the novel unfolds in a series of short vignettes. Some involve the police inspector. Some the neighbors and other people in the community. And there are several unexpected appearances of people from Bess’s past: the pregnant girl who shows up on the doorstep of the house, the stranger living with a neighbor (a neighbor who disappears halfway through the book), Bess’s ex-husband and, yes, eventually, her daughter. The movement of the story introduces questions—about Bess, about Halland, about their separate and united pasts—and like any novel, some of these questions are addressed while others remain suspended, tantalizingly, over the reader.

Bess’s being a writer is not something to overlook – especially because she is our narrator. As the mystery deepens and unexpected information comes to light, Bess begins to subtly comment on the mystery genre and how a murder mystery should be organized. Remember, Halland and Bess were watching a police drama the night before his murder. In another scene, Bess notices a man in a train reading a thriller. And finally one night, exhausted, she sits down in front of the television and watches crime show after crime show. She’s interested in the neatness of these fictional stories:

Simplicity was a virtue. First a murder, nothing too bestial. Then a police inspector. Insights into his or her personal problems, perhaps. Details about the victim. Puzzles and anomalies. Lines of investigation. Clues. Detours. Breakthrough. Case solved. Nothing like real life. […] The puzzle attracted me—the solution left me cold. Nothing like real life.

This scene can be read as a clever warning to the reader because as The Murder of Halland moves quickly to its end, the puzzle becomes more and more important and the solution more elusive. Juul loads the story with new details and questions, puzzling conversations and mysterious scenes. And here a tension arises, between reading to solve the mystery—wanting the logic of it all to make sense, wanting to be led along a familiar path to a feeling of resolution—and reading for the sheer delight of the intricate puzzle, feeling somehow stimulated by Juul’s portrayal of the messiness of a real life death.

This resistance to a single all-revealing resolution is what makes this book a clever anti-mystery and a subtle exercise in storytelling. If the pleasure of a traditional mystery comes from finding an answer and a logic, from allowing the reader to reach a conclusion that effectively ends their engagement with the story, then the pleasure of The Murder of Halland comes from the skillful way Juul sidesteps that traditional question and, instead, uses a strange and unexpected murder to comment on grief, on friendships and love, on the nature of regret, and, perhaps more than anything else, on the complexity of private feeling—that unknowable corner of the individual, the innermost realm, the censored thought and secret longing.

Pia Juul, born 1962, claims her place as one of Denmark’s foremost literary authors. She has published five books of poetry, two short story collections and two novels. The Murder of Halland was published in Danish in 2009 and has won Denmark’s most important literary prize, Den Danske Banks litteraturpris. Pia is the translator of Ali Smith and Alain de Botton into Danish.

Martin Aitken holds a PhD in Linguistics and gave up university tenure to listen to The Fall and translate literature. His work has appeared in book form and in literary journals. He lives in rural Denmark.

Michelle Bailat-Jones is a writer and translator living in Switzerland. Her fiction, translations and reviews have appeared in various journals, including The Kenyon Review, Hayden’s Ferry Review, The Quarterly Conversation, Cerise Press and Fogged Clarity. She is the Reviews Editor here at Necessary Fiction.