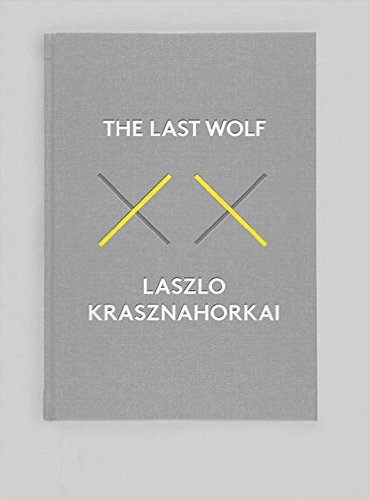 László Krasznahorkai opens the flood gates with his prose, offering sentences that can start calm and reflective before quickening the pace of his clauses like a stream morphing into rushing rapids. His settings have grown from personal, localized, and brutal to worldly and enchanting. His themes, which used to focus on the effects of the Soviet Bloc on the psyche and society, drawn from his formative years in Hungary, have turned outward; with expansive traveling and age influencing his perspectives, he’s turned his thoughts toward the abstract—art and its creation, the nature of beauty, the beauty of nature, and the restoration and ritual of all of it. And in some cases, such as with his two new novellas, The Last Wolf and Herman, he brings all of it together—the political and the abstract, the internal and the external, before and after. They are brilliant in their ability to synthesize so many of his trademark themes and styles, yet, there is only one thing a prospective reader thinks after flipping open one of his novels: Where does that sentence end!?

The most obvious features of Krasznahorkai’s writing are the unending sentences. He has won the Man Booker International Prize and received international acclaim for the handful of his novels that have been translated to English. In Hungary, he’s been honored with awards for decades. Yet his popularity cannot be helped by this blurring of the page. Without paragraph breaks or periods to provide opportunities for readers to regroup, the mind wanders and then—before the reader has a chance to gauge his storytelling, his tendencies, the fun he has with those streams of infinite clauses—the prose is rendered opaque and the reader is lost amid a pool of words.

In interviews, he has stated that he does not believe most people speak in full sentences, which in itself is worthy of debate and research, but regardless, he lets his sentences ramble on as much as he believes the spoken word does. His earlier work is more timid with this tactic, but he has grown zealous. At this point, anyone familiar with his work has to admit that he’s at least partially obscured some sublime stories within his unsculpted blocks of prose.

These latest books reach new extremes: The Last Wolf consists of a single, eighty page-long sentence. Herman has a couple of periods per page—but still, nearly without paragraph breaks.

Here is the opening run of clauses in The Last Wolf:

There he was, laughing, but in trying to laugh in a more abandoned manner he had become pre-occupied with the question of whether there was any difference at all between the burden of futility on the one hand and the burden of scorn on the other as well as with what he was laughing about anyway, because the subject was, uniquely, everything, arising from an everything that was everywhere, and, what was more, if indeed it was everything, arising out of everywhere, it would be difficult enough to decide what it was at, arising out of what, and in any case, it wouldn’t be full-hearted laughter, because futility and scorn were what continually oppressed him, and he was doing nothing, not a damn thing, simply drifting, spending hours sitting in the Sparschwein with his first glass of Sternburg at his side, while everything around him positively dropped with futility, nor to mention scorn…

Get past the choppy pacing and scattershot detail, and he is relating two core themes: scorn and futility. Quickly thereafter, the character’s career as a writer “who had written a few unreadable books full of ponderously negative sentences and depressing logic in claustrophobic prose” comes into focus, and that negative language used to describe his past work seems to inspire his current paralysis of thought and language, his own futility and perceived scorn, which are brought to life by that anxious, insistent, rambling narration.

The main character is obsessed with his waning career, too insecure to make a next move of any sort, stuck literally walking in circles and returning to the same bar to sip on the same Sparschwein, when an adventure pops up and practically forces him to act: he is invited to Extremadura, a region in western Spain noted for its wildlife, with instructions to “immortalize the experience, immortalize it entirely as you see fit, just so long as you present posterity with some clear picture.” Almost theatrical in its moral, thematic injection of global conservationism as well as the contagious excitement of an intellectual pursuit that has his translator rapt, the trip provides enlightenment and broadens his perspective beyond his own petty legacy.

Similarly, Herman is a story that relies a lot on the power of reflection and its ability to shape one’s past and present. The story is told twice, first from the point of view of the titular tracker and hunter, who suddenly resents the effects of his craft, and then from the point of view of a group of young adults visiting a sick parent in the town that Herman terrorizes once his hunter’s instincts tell him to turn on his benefactors.

The time and setting are left unestablished; building on The Last Wolf’s mostly ephemeral settings, Herman takes Krasznahorkai even further away from his earlier novels’ use of very specific locales rife with political subtext. What readers are told is that an unruly forest has grown into “an unmanageable and impenetrable jungle, a veritable ‘sore on the well-groomed body of the region’ where no right-thinking hunter or hiker would ever set foot.”

At the end of two years, Herman is suffering recurring nightmares about the pit he uses to discard his animal carcasses, as again, a theme of conservation is injected. Despite Herman’s successes, he is too grumpy to accept the town’s adulation. He isolates himself, goes to doctors, convinced it’s a physical malady causing this emotional confusion, until finally, he explicitly doubts the laws of society that had kept him and his noble profession in good order. Soon, he starts to moralize these subversive thoughts slowly crystallizing in his mind:

He finally understood that he had been living his life steeped in the deepest ignorance, allowing himself to be led by the nose, firmly believing he was obeying the order of divine providence when he had divided the world into noxious and beneficial, while in reality both categories originated in the same heinous ruthlessness that had infernal light lurking in its depths … A burst of compassion thus swept him among the fallen, and this same compassion made him revolt against that loyalty that had till now shackled him to the tyranny of the law.

He isolates himself even further now that he sees a “higher law beyond human reckoning,” and comes to see himself as another victim of the ruthlessness of civilization. This is a rare instance of a Krasznahorkai character’s enlightenment happening on-page. Herman breezes right through moderation and commits to the furthest extreme, prompting such questions: What good is growth if the one absorbing it is too naive from years of obedience to put it to good use? What good are the hunter’s violent mechanisms when one’s sense of duty can so easily be warped?

In the second version, told from the point of view of a group of unabashed paraphiliacs, Herman’s story sounds like a myth worth investigating. They revel in the ingenuity of his traps, they bask in his “supernatural aura”: “People chose to see all of this as evidence of a sophisticated cruelty, although it was obvious even to us, unfamiliar with the art of trapping, that ‘Herman’ must be a fanatical professional obsessed by his craft.” As Herman starts to turn his efforts toward scaring the townspeople, they quickly find the parallels between themselves and Herman, in “playing the role of pioneers in a world only hesitantly liberating itself from the controlling machinery of goodness.” Except that Herman, who only recently became liberated from that machinery, in turning the violence he has learned against his benefactors, has risked “monumentalizing destruction,” while the group’s violence matched their desires in that they were mostly selfish and private.

Regardless, the group does not get involved; they are merely onlookers. They are not emotionally paralyzed, nor do they grow emotionally. By writing this second version, Krasznahorkai gives us a contrast to Herman (as a narrator), and to the narrator of The Last Wolf. In both cases, older men struggle to reconcile the worlds they constructed in their younger heads with the realities of a world that either trivializes or manipulates their skills. Meanwhile, these sexually aggressive, promiscuous, violent young adults are so self-aware that they can discern the emotional complexities of the relationship between the town and Herman better than anyone else involved.

In an attempt to assess the dangers of an enlightened self, the anxiety and responsibility that comes with age and reflection, Krasznahorkai presents an ideal with these adventurous young adults, who are open with themselves and others about who they may or may not be, and who feel more comfortable with themselves physically and emotionally as a result. He hints at this most notably with snug little sentences that, after more than a hundred pages of his relentless style, jump off the page with their brevity and matter-of-factness: “He could not deny that he too was amused by the story and so we agreed to stay on until we found out something definite.”

And even when the clauses start to pile up in this second telling, they are used to solidify concrete statements, instead of using them for cognitive wandering or waffling. Krasznahorkai uses this contrasting sentence structure and, perhaps more importantly, an assertiveness to establish this counternarrative to Herman’s rantings in the first telling of the story.

Krasznahorkai’s ability to subtly counter his own, career-long stylistic choices suggests that he employs unending sentences because he is so often depicting characters who are not in an emotional place to provide concise, structured thought. It turns out that Krasznahorkai isn’t hiding within those blocks of texts; he’s using them to build characters in a more dynamic way and ingrain them into the minds of readers.

Krasznahorkai spent his career exploring the fine line between emotional and intellectual stability and instability, and he’s become expert at navigating this territory. His unwieldy sentences are not a barrier to entry. Their qualities—their shape and rhythm—can be as telling as any plot detail. They’ve become the most essential element to anything Krasznahorkian: A difficult, precarious headspace that demands enough attention from readers to recognize the nuance required for an author to write such haunting stories.

László Krasznahorkai (www.krasznahorkai.hu) was born in Gyula, Hungary, in 1954. He worked for some years as an editor until 1984, when he became a freelance writer. He now lives in reclusiveness in the hills of Szentlászló. He has written five novels and won numerous prizes, including the 2015 Man Booker International Prize, and the 2013 Best Translated Book Award in Fiction for Satantango. In 1993, he won the Best Book of the Year Award in Germany for The Melancholy of Resistance.

Justin Stephani previously reviewed Binary Star by Sarah Gerard for Necessary Fiction. He is a bookseller and programs manager for Politics & Prose Bookstore in Washington, D.C. His writing has appeared on The Rumpus, Electric Lit, and Tweeds Mag.