The Goddess of Small Victories by Yannick Grannec 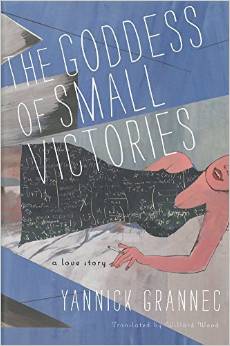 There are two ways of spreading light: to be the candle or the mirror that reflects it.

So begins the novel, which won the French Prix des libraires in March 2013. The Goddess of Small Victories alternates between Vienna in the 1920s and 1930s and (relatively) modern-day USA.

At the beginning of chapter 1, the reader meets Anna Roth who has been given the task of acquiring for the Institute for Advanced Studies (IAS), Princeton University, the papers of a world-renowned scientist. His widow, Adele Gödel, has been unwilling to entertain previous requests.

The odd-numbered chapters are told by a narrator, the even-numbered, earlier ones by Adele. Each has a date and descriptive title – “1928 Back when I was beautiful”, “1929 The windows open even in winter”, “1944 An atomic soufflé” and so on – and an epigraph (which very soon I found required too much effort and ceased to read). This last chapter, for example, has an excerpt of a letter from Albert Einstein to President Roosevelt about uranium as a new and important source of energy, tying historical reality to a fictional description of a lunch with Einstein and other Princeton scientists at the Gödels’ house.

Chapter 36 set in 1949 has the same title as the novel and provides an understanding of it: Adele speaks of her victory in acquiring the house at 129 Linden Lane and of her reward:

I had bought this white dress with blue patterns for myself to celebrate my victory. For turning forty-nine in 1949, I surely deserved a dress at $4.99! Knowing that his cautious nature would disapprove, I said nothing to Kurt, though he would have appreciated the numerical symbolism. Anyway, he couldn’t have told a new outfit from an old rag.

This chapter is the center of the novel: an excellent example of a domestic scene (a house-warming party) where the male guests discuss mathematics, time travel … and the chapter concludes, “If men swept the floor once in a while, they’d be a lot less unhappy.”

The two women, Anna and Adele, are the main characters in the novel whose juxtaposition allows the unrolling of the story of Adele and Kurt Gödel within a wealth of material on the mathematician himself, his contemporary scientists, logic, philosophy, the nature of genius: “This is a field most people can’t begin to understand even in its simplest form!” But the goal of the novelist is to make this science approachable.

Gender roles and differences are noted and explored. Adele has strong views, based originally on her experience of life in Vienna, tempered with living with Kurt. Anna’s parents, together with Leo’s, provided confusing role models. She has been devalued and demoralized by both sets of parents and is searching for the meaning of her life. In this sense, she is enlightened by her exchanges with Adele and by the end of the novel has found the courage and decision to act.

Having to be alluring was an archaism, and she, Anna, refused to submit to it. She had never shared her friends’ interest in window shopping or their hysterics before a party. She saw it as a revival of the Stone Age division of the sexes: the hunter-boys chase balls and the gatherer-girls peel coat hangers. … How could she explain to Adele that she had refused exactly the fate that Adele had accepted? For Mrs Gödel – who, after all had only been following the paradigms of her epoch – choosing a man like Kurt or Leo necessarily meant sacrificing herself, even if at times it brought collateral benefits like sex. Monsters take everything and give back nothing.

After Kurt’s death, Adele was drained:

There wasn’t a drop of courage left in me. I lived inside a fat, dried-out old woman. My entire being told me to give up the struggle. I was enormous, and he was transparent, as though I’d sucked up all his flesh. But it was in fact he who had worn me down, who had used me as an extra battery. These last years seemed to have gone on forever. I hadn’t had children. I would leave no work behind. I was nothing. I was only suffering. … Oskar should have brought him the cyanide. A poisoned apple for two, it was the perfect solution: 220 plus 284, we would have closed the circle.

The reference to apples and amicable numbers links to a romantic moment early in their relationship when Kurt explained what these numbers meant – and also to Leo’s inaccurate story of how Turing died from an apple laced with arsenic. The author is skilled in weaving small details into her broad picture.

The book Anna carries in her handbag throughout the story is Borges’s The Aleph, in which the Aleph is a point in space that contains all other points. This links to the difference of infinity between Anna and Leo:

His world was peopled with 1s and 0s, in black and white, while Anna’s harbored every gradation of gray. He was discrete, she continuous. They had never managed to define a border between them that was both simple and permeable yet also watertight enough that neither would dissolve in the other. Unlike in mathematics, Leo’s infinity seemed more voracious than Anna’s.

Chapter 52: “1973-1978 So old a love” introduces Elizabeth, a new voice and perspective. Elizabeth (whom Anna met briefly) recounts in a series of letters her work for the Gödels and we see the couple from the outside. One surprise is that Adele is in a wheelchair and Kurt does the shopping and housekeeping; a second is the love for his wife that Elizabeth sees in Kurt.

After the novel’s conclusion, the author adds a postscript; a note on the veracity of the story and additional, non-historical characters; acknowledgements; 64 notes on various points in the text; a select bibliography of further reading and a list of credits for the use/translation of the epigraphs. She is at pains to show the depth of research that the reader can rely upon.

Yannick Grannec has successfully produced a debut novel based on fact that entertains and enlightens. As part of its Millennium celebration issue, _Time _magazine included Kurt Gödel in its list of the 100 greatest people of the 20th century, but he remains relatively unknown to the general public. His wife is even less known.

In preparing this review, I came across a piece by Georg Kreisel (Biographical Memoirs of Fellows of the Royal Society, 1980, vol. 26) a mathematical logician who knew the Gödels:

I visited them quite often in the 50s and 60s. It was a revelation to see him relax in her company. She had little formal education but a real flair for le mot juste … and a knack for amusing and apparently quite spontaneous twists on a familiar ploy: to invent – at least at the time – far-fetched grounds for jealousy. Gödel was very much at ease with her style.

This is certainly the Adele we meet in the novel.

The cleverness of the story is the convincing parallel of the two “A” women – whom a generation and a half and a lifetime’s experience and culture keep separate. Yet there is empathy between the two, building to a solidarity that includes almost all other women in the novel. Male characters are in general unsympathetic – a notable exception being Einstein. And the (happy) end of the novel is a reinforcement of its mathematical core: Anna describes Leo’s telephone number as “a series of digits without logical connection but displaying perfect elegance.”

In an interview in October 2014, Yannick Grannec explained:

Fiction, recounting a singular human adventure, seems to me to be the natural medium for speaking of the universal. I often use this image: the love story of Kurt and Adele is the Trojan horse that allows me to speak of more abstract subjects without paining the reader allergic to science. I’m going to talk to you about mathematics, and you won’t even see me doing it. (Or almost . . .)

Yannick Grannec is a graphic designer, freelance art director, professor of fine arts, and enthusiast of mathematics. The Goddess of Small Victories is her first novel. She lives in Saint-Paul de Vence, France.