The Final Days of Great American Shopping by Gilbert Allen 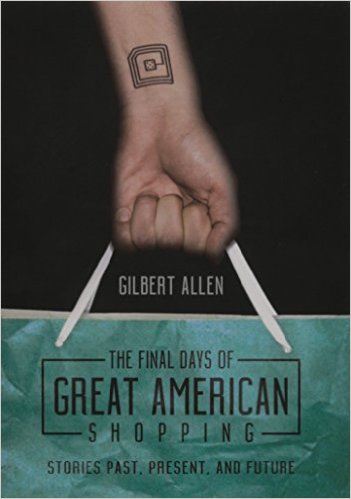 The stories in Gilbert Allen’s The Final Days of Great American Shopping progress chronologically over a century, beginning in the early 1980s and ending in 2084, and although marketed as a short story collection, anyone could brand this a novel and be spot on. Structured much like Jennifer Egan’s A Visit From the Goon Squad, these stories present a rotating cast of characters who appear in one another’s stories in minor and sometimes not so minor roles.

Most of the narratives take place in and around Belladonna, a town of the author’s creation in upstate South Carolina. With one exception, however, these stories do not confront the innate complexities of modern Southern culture and its collision with the bruise of the region’s history. And nowhere do they drip with the nostalgic clichéd syrup common in the moonlight-and-magnolia view of the South. As far as setting goes, they are Southern, but the characters’ struggles are universal. Gilbert Allen writes about teenagers, senior citizens, lawyers, car salesmen, insurance brokers, entrepreneurs, widows, widowers, and divorcees, and these characters deal with death, disease, tragedy, loneliness, aging, and love.

On the surface, many of the stories are quirky and playful, but without the jokey pitfalls into which a lesser writer might stumble. In “Dream House,” John Beegle becomes obsessed with restoring and flying an antique Autogyro—a small one man helicopter he finds hidden in the family’s new garage. But the story’s true tension lies in the difficulties he and his wife, Mona, face in parenting their precocious and quickly maturing thirteen-year-old daughter. An even deeper, more personal struggle lies in the psychological effects resulting from Mona’s recent hysterectomy, adding significant depth to John Beegle’s dream of escaping in his Autogyro, if only for a half-hour.

Although some pre-publication blurbs label the book a satire of commercialism and the American culture of self-indulgence—and that is certainly true on some levels here—to only paint that picture of this collection cheapens it. Pop culture sets a tone in these pieces and helps create solid footing throughout by giving the characters a real world with which to grapple, but the heart of these stories lies well beyond commercialism.

While a widow deals with her daughter’s disfigurement from the car wreck that killed her husband, a divorcé battles loneliness by crowning himself “the Undefeated Speed Dating Champion of the World.” A pro-choice artist subverts the government’s decision to erect a “monument outside the Statehouse memorializing ‘unborn soldiers who have lost their lives in the war against abortion’” with a sculpture of her own. Yes, there is comedy and even lightheartedness in these stories, but beneath the comedy lies unflinching seriousness.

The most politically and culturally topical of these stories is the award-winning “Flaggots,” set in Columbia, South Carolina, where until recently the Confederate flag flew outside the Capitol Building. Zach, a Vietnam veteran who “re-upped with the anti-war movement,” works at The Domicile for Decency Thrift Store and, according to a coworker, has “had a lifelong quasi-clinical fascination with self destruction, starting with himself.” Zach faces off with Stan Defazio, a bail bondsman and Confederate flag supporter whose business sits across the street., Allen evokes humor and depth as well as beauty and grit:

But it’s lovely outside now, even in this piss-poor part of the city—still cool, sparse traffic on the shadow-smoothed asphalt, with the bail bondsman’s building across the street backlit by the rising sun like an outtake from a Spielberg movie. ET, phone Guido.

In “Peregrine,” Butler Breedlove, unable to cancel a cruise his recently deceased wife booked without trip insurance (she knew he wouldn’t go otherwise), takes the trip alone. “The Cruise to Nowhere” caters to people like Butler who avoid the outdoors and never leave home to travel. Part of the “Hermetic Vacation Package,” the cruise line promises “no ports of call, all indoor-amenities, the same table for every dinner, the same cabin every night … Peregrine even had its own underground parking garage in Charleston, with an umbilical cord leading directly to the ship.” As seen elsewhere in the collection, the author exhibits a keen ability to mix humor and heart into a story that evokes pathos.

The narrator in “Test Drives” treats the reader to a behind-the-scenes look at new car sales at an upscale dealership whose advertisement tag line is “The heaven that grows on you.” “Test Drives” stands as the most unapologetic story in its portrayal of humanity’s weakness facing off with the temptation of commercial flash.

One might think “Halfway to a Sweet Ride” would fall under a similar shingle, its characters obsessed with extreme-couponing, but Allen highlights the poignancy of meaningful relationships in the journey of aging.

And near the end of the collection is “Peers,” in which a jury made up of characters from previous stories wait to complete their civic duty. In a narratively clever way, the story allows the reader to witness these characters in their later years, all having grown a little older, wiser, and in some cases, more stubborn.

The final piece, the collection’s title story, set in 2084 and partially set in a hermetically sealed shopping mall, has been compared to works by George Orwell, John Cheever, and Flannery O’Connor. The story is a fitting end to this collection. These tightly linked narratives can stand alone, as most of them originally did in various literary magazines and newspapers, but read in order a narrative arc emerges, giving the book power that resonates solidly at the book’s end.

Although The Final Days of Great American Shopping is Gilbert Allen’s first book of prose, he is not a debut author. With six poetry collections to his credit, he writes with a poet’s sensitivity to language, but the verve and broad-stroke narrative ability of an exceptional storyteller.

Gilbert Allen is the author of six collections of poems, most recently Catma. He received the Robert Penn Warren Prize in Poetry from the Southern Review in 2007 and a Special Mention for fiction in Pushcart Prize XXXVII. He was inducted into the South Carolina Academy of Authors in 2014. A longtime resident of upstate South Carolina, Allen is the Bennette E. Geer Professor of Literature Emeritus at Furman University. The Final Days of Great American Shopping is his first book of prose fiction.

John Baum’s work has been published in Blue Mesa Review, Booth, St. Anne’s Review, The Charleston Post & Courier, and The MacGuffin. Currently at work on a novel and a short story collection, he lives in Atlanta with his wife and their two dogs. www.johnpbaum.com.