The Complete Works of Marvin K. Mooney by Christopher Higgs 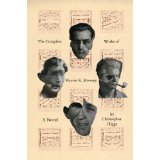 Christopher Higgs’ novel, The Complete Works of Marvin K. Mooney, is the experimental literature fan’s experimental novel. A novel about the fictional writer, Marvin K. Mooney, as much as it is an overview of the history and nature of experimental writing, Mooney is constructed from essays, reviews, letters, short fiction, creative non-fiction by Mooney (and very often about Mooney and the validity and importance of his work). Many of the essays and ideas within the novel directly assault the literary theories of Aristotle and the idea of fiction as entertainment, where the author’s goal is to hide the authorial puppet strings, allowing the reader to submerge themselves within the “dream” of a fictional world, and therefore the novel can be seen as an extended argument in favor of its own existence. Mooney is also a lively and comic novel, as it is likely the only novel in existence to compel the reader to demand (and then grant) an encore.

As an experimental novel obsessed with its own nature and its place within the tradition of experimental fiction, it is appropriate that Mooney is easily comparable to the great experimenters of the past— the opening text, a paper delivered by Mooney at a symposium for postmodern studies, for instance, recalls the innovations of Rabelais in its juxtaposition of high and low culture, giving weight to quotations from Roland Barthes and Johnny Cochran’s Chewbacca defense in the South Park movie while a succession of quotes from Mooney’s readers about the novel that follow the speech (one of these is by a “Narratologist” who announces, “My only firm conclusion was that since it was so wacky it had to be postmodern”), revisits Gilbert Sorrentino’s opening Mulligan Stew with his many rejection letters as much as it does Don Quixote or Spaceballs (the Mel Brooks movie), by making a subject of its own presumed reception.

One of the more interesting ways the aesthetics of experimental literature are validated (and actually given ascendance over realistic and representational literature) occurs when grotesque and absurd moments are transplanted into Mooney’s various essays and speeches. “Hold Your Horses the Elephants Are Coming” begins as what the reader assumes is a factually accurate account of the history of the circus, until this accuracy is called into question (and ultimately obliterated) when the text culminates with the absurd:

Only five people noticed when the death of the circus finally occurred on March 19, 1978. A few unread newspapers in small towns … ran brief obituaries, each noting how the death was a long time coming. But overall, no one cared…. Instead, a single carrier pigeon traveled from Greenland to Chile with a slip of yellowed paper tied to its ankle that read: ‘Dear Fellow Circus Performers: It’s over. They do not need us or want us anymore.’

And yet, while those events certainly did not happen in actual reality, there is little denying that the events described capture some essential truth about the decline of the importance and allure of the circus in the modern world. So effective are those absurd punctuations that Mooney (or Higgs) here makes an effective case for essential rather than literal or factual truth in literature.

Even the prose fiction gathered here functions in much this way. For instance, the brief piece “On Being a Good Father” offers a nightmarish fantasy in substitute of any realistic or representative musing:

A grizzly bear ate my imaginary four year old son in one bite. So I took a butcher knife to its throat … stuck my fingers into the wound and peeled back the skin like curtains, sliced open the stomach, reached in and pulled my boy out whole; slapped him on the back to make him cough and regain his composure.

This story retains the essential idea of what it means to be a good father and, again, does so in an arguably more interesting and memorable way than if it had been realistically depicted.

The ultimate embodiment of this idea is captured with the novel’s obsession over its author. Here “factual” details like birthdates are given only to be later refuted or altered and, while the closest the novel comes to a narrative thread is the idea that Mooney has gone “missing”, even whether or not he has disappeared is later called into question. In fact, by virtue of the common tone of all the writings (and by the title of the novel) it is possible that those writings attributed to neighbors, co-workers, and various readers are in fact actually “authored” by Mooney. That these writings tend to fixate on Mooney as a mysterious and important experimental writer, either praising or denouncing his work, would seem as evidence in favor of this theory, considering Mooney’s obsession with the validity and importance of experimental writing in his speeches and essays. Yet, for all this shifting of possibilities, the reader is also made aware that any speculation on who the author of those pieces is and when he was born or how he was educated or if he is missing is finally moot considering there is no actual Marvin K. Mooney, and the guiding intelligence behind all this work, Mooney’s or otherwise, is Christopher Higgs. And even this “fact” is called into question because who is Christopher Higgs, after all?

Ultimately, The Complete Works of Marvin K. Mooney embodies the quotation attributed to John Hawkes within the novel, “I began to write fiction on the assumption that the true enemies of the novel were plot, character, setting, and theme, and having once abandoned these familiar ways of thinking about fiction, totality of vision or structure was all that remained,” pushing those ideas to the outer most edges of their possibility. Interestingly, the effect of all this obsessing over the author has the effect of diminishing the importance of “who” the author is in favor of the text itself. Finally, the figure of Christopher Higgs as the guiding intelligence of the work, as well as the accuracy and veracity of all facts and quotations given, become of lesser importance to the reader than The Complete Works of Marvin K. Mooney as an object and a reality in itself. And perhaps this is the novel’s greatest accomplishment.

Christopher Higgs has an MA in English from the University of Nebraska, an MFA in creative writing from The Ohio State University, and is currently pursuing a PhD in literature and critical theory at Florida State University. He curates the online art gallery Bright Stupid Confetti and is a frequent contributor to the literary website HTMLGIANT . He can be found online at www.christopherhiggs.org