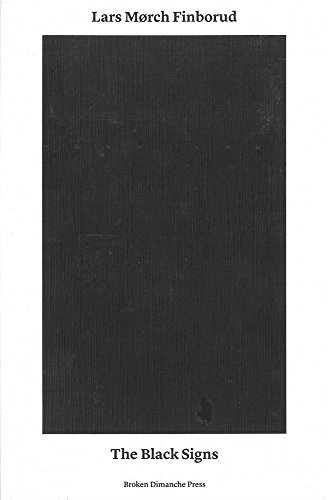 It is likely Lars Mørch Finborud ’s first book will not find many readers in America, compared to those that it has reached in his native Norway. One might hope he takes this as a compliment. In any case, it will be good if this prediction proves false, since this is the kind of book that our literary landscape most needs.

To explain why, it is easiest to start by saying that Broken Dimanche Press and FUK Design Studio have produced what may just be the perfect cover for this book. The cover is a linen cardstock, all a shade of eggshell except for a large, very black rectangle on the front. This blot of darkness serves well as a serious aesthetic representation of the book’s main theme, for if, as every writer knows, the blank white page confronts us with the mystery of what might be, the blank black page confronts us with the mystery of what already is.

The book begins with a short introduction, written by a lawyer tasked with entering a long-abandoned house in order to discreetly inventory the estate. Inside the house he finds an unbelievable amount of black signs—metal, glossy, piled to the ceilings and commanding every room. The signs are copies of the type that usually mark historic landmarks, with the difference that these signs are meant to mark the most pedestrian occurrences: “In this place, Lene Ugelvik’s red balloon was stolen by a gang of boys on March 23, 1918. She was inconsolable for the rest of the day.”

Near the door, as though dropped in haste, the lawyer also finds a notebook filled with letters from the house’s owner’s grandson to a man named Gustomuldo. After reading through the book, the lawyer flees the premises, and the novel goes on in epistolary form, comprised of these same letters. It is soon apparent that the grandmother has died. Her grandson is consumed by his concern for the fate of her vast collection of what he calls jutegnask:

Jutegnask are inanimate art relics that linger in the indefinable realm between art and rubbish. Non-art-art = jutegnask…Although Shakespeare penned thousands of winged stanzas which we quote with utmost devotion, it was the words such as “How much do these apples cost? and “What shall we eat for supper” that passed through his mouth more often. A jutegnask collection is comprised of such sentences… Karl Ove Knausgard’s Swedish prescription for bipolar eczema cream, is jutegnask… So is Virginia Woolf’s swimming cap… Olaf Bull’s French manual for enema—paid for with money he earned giving Norwegian lessons to James Joyce in Paris—is well within the margins.

For a debut novel, Finborud’s prose seems effortless—disarmingly so. Rest assured that this is not the kind of book through which a reader has to slog. The story glides along in a smooth stream—albeit one that runs decidedly underground, and carves some very shady caverns. There is plenty of fodder for critical discussion (questions of aesthetics come most readily to mind) but at its heart The Black Signs is about the ways in which we go about assigning cultural value. There is a satisfying intellectual progression from the grandmother, who believes in the inherent value of apparently insignificant pieces of the lives we all deem culturally significant, and her grandson, who has come to value the most insignificant occurrences in all lives —irrespective of their place within the cultural memory. According to the unresponsive Gustomuldo, this grandmother began her project in an effort to connect the seemingly soulless “non-artists” with the artists whose grand task is to construct their souls.

Years later, her grandson has taken it a few steps further, seeking a connection to humanity qua humanity: Soulful, soulless, “Everything was to be included.”

This is, of course, the destination one must reach when riding this peculiar train of thought—the same train that began, as Finborud reminds us, with Duchamp’s readymades. In the end, it must turn out that everything is of an equal and continuing importance. This is thinking on a cosmic scale—one may reject the proposition as a practicality, but one cannot deny that in a larger sense it is a fundamental truth.

It was perhaps a little lazy to present these thoughts in an epistolary form. The concept is robust enough; it begs for more invested treatment. But The Black Signs is not much concerned with narrative technique. Readers who appreciate a well-constructed story will be disappointed. In fact, there is not much story to speak of. The grandson finishes his project (all except for hanging up the signs) and his journal entries simply leave off, once there is no longer any more for him to do. And yet the novel still enthralls by virtue of its simple dedication to one innovative and imaginative theme. This is, undoubtedly and unapologetically, a novel of ideas. What the thoughtful reader feels most is excitement at the questions that it poses. Finborud is doing something valuable enough to make up for a lack of technical skill. Though his present work relies perhaps too heavily on its conceits to fill in for a lack of psychological and dramatic depth, it still deserves one of the highest praises one can give a work of art—that it will make you see things differently.

Lars Mørch Finborud was born in Oslo in 1980. The Blacks Signs was followed in 2014 with the collection of essays, poems and short stories Sanding Down Gravestones. He has a degree in art history and works as a curator at Henie Onstad Kunstsenter. Finborud runs the record companies Plastic Strip Press and Prisma Records, and in recent years he has written on a regular basis for the literary magazine Vinduet and Morgenbladet. He has also published art historical books on Bauhaus, Christopher Nielsen, Arne Nordheim and performance art.

Ryan Burden is a graduate of the Warren Wilson MFA Program for Writers and the current Managing / Fiction editor of Four Way Review, an online journal from publisher Four Way Books. His work has appeared in American Book Review, Foundling Review, Gulf Stream and JMWW, among others.