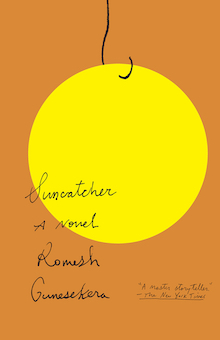 The 1960s were a time of great change for Sri Lanka, then known as Ceylon. Having gained independence from the British in 1948, the country was still gripped by internal power struggles. It was going through the growing pains of any new nation as it comes to terms with how it should exist in the world: what language it should speak, how power should be distributed, how to make sure the voices of a diverse population are heard.

This is the backdrop of Romesh Gunesekera’s eighth book, Suncatcher. The novel starts with Kairo, a boy on the cusp of great change himself, meeting the mysterious Jay “in a church car park off the high road.” Both on bikes, Jay challenges Kairo to a race. Bookish Kairo, surprised that anyone — especially a kid like Jay, athletic with “sun-baked streaks on his proud boyish cheeks” — would notice him, let alone engage with him, agrees in an effort to impress the young man. And so starts the friendship of opposites. While Kairo likes nothing more than browsing Western novels at the local used bookstore, Jay is a budding naturalist who would rather go birdwatching (and bird catching, as we soon find out) than be caught with a book. But soon Kairo realizes the power imbalance at the core of their friendship: “I needed a guide, a hero, illumination,” he says, narrating the novel as an adult looking back. “Jay, I now know, needed an acolyte.”

It’s not simply a psychological imbalance, either. Kairo’s family is comfortably middle class: his socialist father holds “an amiable senior executive position” in the Labour Department and his mother works late hours at Radio Ceylon, “revelling in the buzz of national broadcasting.” In contrast, Jay’s family is rich, obscenely so, his father a businessman and his mother a housewife with dreams of movie stardom. While Kairo lives “on the edge of Colombo’s newest residential block” in a “mishmash of a house,” Jay inhabits a colonial mansion that even has a name: Casa Lihiniya.

A less ambitious author would have perhaps made this inequitable friendship of personalities and class the central conflict in the novel. Indeed, for a good portion of the book, Suncatcher seems to want to be that, especially as Kairo is invited to Jay’s family’s summer home, a coconut plantation, in an episode which boils over with a violent incident that brings to light not only the stark class and personal differences between the two characters but also their moral compasses. Suncatcher soars when this class critique is sharp, as seen in the way Jay’s family treats its servants to the disappointment of Kairo. In one memorable scene, Jay literally drags a servant boy, an event that leaves Kairo feeling sick and momentarily disillusioned with their friendship: “All the lonely dread, which over the last two months had ebbed away, rose again, breaking the veneer of camaraderie I had carefully fitted to our joint enterprises.” When the servant lets out a pained whimper, Kairo observes that “Jay seemed not to notice.” These moments of lucidity lift the novel from an ordinary bildungsroman to one that is socially conscious of the inequalities of postcolonial Ceylon.

But Gunesekera wants this novel to be more than a story about class and there are multiple themes woven in throughout. There’s the queer infatuation Kairo has for Jay that readers first see when Kairo notes “the first time, almost the only time, I felt his hand on me.” It appears again, briefly, when a girl named Niromi comes into their lives, leaving Kairo to nurse bouts of jealousy. There is also Jay’s growing recklessness and his “chronic hunger for dreams” that would eventually lead the novel to its inevitable crescendo, which gives the novel too conspicuous echoes of The Great Gatsby (there’s a reason why “Jay” is named “Jay”). Added to this, there’s the project of Ceylon, which we hear from the adults in the novel as they discuss what’s to happen with their new country.

Indeed, none of these strands are fully developed. Kairo’s desire for Jay is only mentioned as “my loneliness” and nothing comes of it — neither action nor outright acknowledgment. If Gatsby is an embodiment of the American dream, Jay should be an embodiment of some Ceylonese dream, but that idea, as presented in the novel, is nebulous beyond an ambiguous ambition that gives Jay his faults of “abruptness, scorn, temper.” And the political situation of Ceylon is obscure; we are privy, like Kairo, to conversations between adults, but these conversations never amount to much — snatches of opinions on the prime minister and unclear worries about a government “obsessed with land use and land reform” and the debate around a national language. “Hadn’t you better start doing something to improve your Sinhala” is a constant refrain from Kairo’s mother as she admonishes her English-speaking family. But these mild scoldings don’t yield much discussion and are used more as a recurring gag to be brushed away than anything of substance. Late in the novel, Kairo calls the world of adults “icebergs: all shiny and smooth on top but with jagged edges lurking out of sight.” The frustrated reader can make the same assessment to the world of this book — so much is hinted at, but not much rises above the surface.

This vague, underdeveloped novel is likewise written in vague, underdeveloped language. Being in a jungle amounts to being “hemmed in by all the thick, fuddling chlorophyll.” Speaking of his father, Kairo gives a strained observation: “He relied on a comfortable compromise between idealism and action which now, with socialism back in the fray, was beginning to show some strain.” Birds in the sky come to the narrator as an overflowing string of words: “A seam of perforations appeared in the sky, dot by dot, stitched by the rhythmic flap of black wings, growing larger by the second, blotching the amber sky in dark puffs with every beat.” The novel aims to be poetic, but the language is clunky and lacks clarity.

At the end of Suncatcher, we see the adult Kairo coming back to his hometown. Watching a gardener working on the “secluded estate bungalow” he’s rented for vacation, Kairo asks him about all the effort it takes to care for such a lush property. “There’s a lot to be done,” the gardener replies, “Not everyone in this country understands that.” To this Kairo — evidently thinking about more than just gardening — replies, “Are you talking about the future? The political future?” It is one of many places in the novel where the author seems determined to extract meaning from the work, where meaning has not been rightfully earned. Like the birds Jay watches, Suncatcher, its story, and what it signifies — in short, what this novel sought to be — remain elusive.

Romesh Gunesekera is the author of Monkfish Moon; Reef, which was shortlisted for the Booker Prize; The Sandglass; The Match; Noontide Toll; and Suncatcher (all published by The New Press). Elected a fellow of the Royal Society of Literature in 2004, he grew up in Sri Lanka and now lives in London.

Eric Nguyen is a writer based in Washington, DC.