Souvenirs and Other Stories by Matt Tompkins 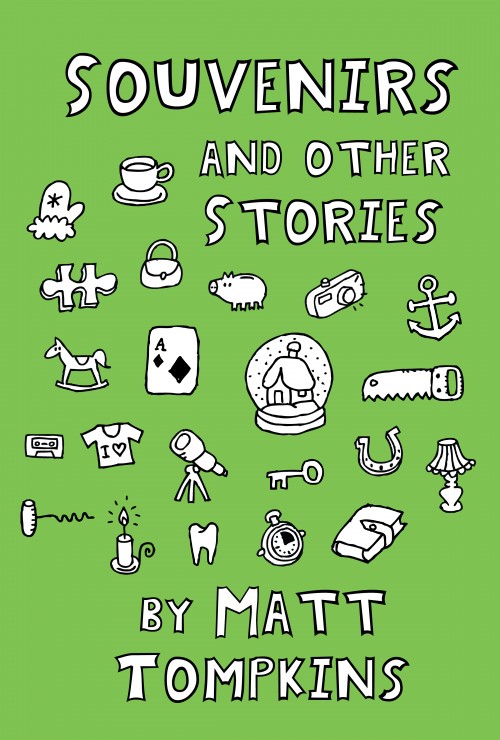 In his book Souvenirs and Other Stories, Matt Tompkins is able to bring magic to the mundane with his straightforward, simple prose. This collection of six stories includes fables, such as “The Water Cycle,” where a young boy’s father evaporates into a fog, tall tales, like “Seeking Advice And/Or Assistance Re: Mountain Lions,” in which a family of mountain lions inhabits a college professor’s basement, and allegories, such as “The World on Fire,” where a man sees the world around him burst into flames. In the title story, “Souvenirs,” a number of mysterious objects randomly appear in a young woman’s apartment. Tompkins brings the reader these strange stories as souvenirs from his travels in the world of magical realism and then plants them into everyday life. Some of the stories are quite short at 1,000 words or less, qualifying as flash fiction, but they all pack a narrative punch.

While comparisons of Tompkins to George Saunders and Aimee Bender abound, and with good reason, another fitting comparison that could be made is Manuel Gonzales and his imaginative short story collection The Miniature Wife. Like in Gonzales’ fiction, Tompkins’ narrators often speak with an understated remove from all of the wild goings on taking place around them. Both Tompkins and Gonzales also tend to describe their quasi-fairy tales in a matter-of-fact manner, much as a journalist would. In his previous book of stories, Studies in Hybrid Morphology, Tompkins evokes similar results, but the means are more scientific than journalistic. In Hybrid Morphology, his stories take on the form of scientific articles with abstracts, summaries, references, and figures. It’s a brilliant way to couch speculative fiction in a style that hasn’t really been seen before, like when a man has lobster claws implanted in place of his hands, or when a cow is given the capacity for human speech.

One minor quibble with Tompkins’ new book, Souvenirs, is that some of the first person narrators in his stories tend to sound similar to each other, as if they’re speaking in the writer’s voice rather than in their own. For example, the voice of a family man and college professor in “Seeking Advice And/Or Assistance Re: Mountain Lions” sounds the same as the voice of a man who becomes an end times street preacher in “The World on Fire.” In Hybrid Morphology, the third person narrator speaking in an identical voice throughout the short stories makes sense in terms of the concept for the book, as each story follows the same narrative template. But in Souvenirs, each story is separate from one another with nothing linking them together other than the fact they’re all written in the first person. The story that’s most successful in breaking out of this mold is the final story in the collection, “BFF,” which is also the only story to have an extended dialogue between two characters, even if one of them happens to be imaginary.

But this doesn’t distract from the biggest strength of the collection, which is that every story is built around the solid foundation of a great idea. Each story then takes the seed of the idea and cultivates it into the Venus flytrap of its extreme conclusion. In the above mentioned story, “BFF,” we are introduced to a couple in a café who are about to breakup, but in Matt Tompkins’s world, instead of a boyfriend breaking up with his girlfriend, it’s a grown man breaking up with his childhood imaginary friend. In “Mel and the Microphones,” an elderly sportscaster with dementia broadcasts all of the small, banal occurrences of his daily routine, much like younger generations do every day on Twitter, Facebook, and Instagram. It ends up being a wonderful inversion of something that the reader tends to take for granted in normal life, as are most of the ideas in the stories presented here.

Returning to George Saunders for a moment, Tompkins is also able to combine pathos and humor in much the same way that Saunders does. This is especially evident in the aforementioned story “Mel and the Microphones” and “The Water Cycle.” In “The Water Cycle,” a twelve-year-old boy with an absent father watches one day as his dad literally evaporates into a fog. But since the fog is sucked into a dehumidifier, which is then dumped into the Municipal water system, the boy is still able to receive visits from his water-borne father in the form of a wave in a lake, a cloud in the sky, or in a cup of coffee. This, of course, begs the question of how reliable a narrator the boy is. Did his father really evaporate into a fog in a stroke of magical realism, or did he just abandon the family and the rest is a story the boy is telling himself to feel better?

This is another strength of the collection, that the reader is never given easy answers as to the meaning of a story. Like with any good short story collection, every story here poses questions and it’s up to the reader to come up with the answers. While every narrative in Souvenirs and Other Stories seems fairly simple on the surface, they ultimately have multiple layers and grapple with more complex issues than those seen at first glance. Not only do the stories wrestle with loss, but also companionship, family, reality, and sanity. Each of the stories deals with the kernel of a bigger issue, but never in a heavy-handed and always in an entertaining way. Since both of Tompkins’s current collections are short chapbooks, one can only hope that he will put out a full-length short story collection soon.

Matt Tompkins is the author of Souvenirs and Other Stories and Studies in Hybrid Morphology (tNY Press, 2016). His stories have appeared in Little Patuxent Review, New Haven Review, Post Road, and other journals. He works in a library and lives in upstate New York with his wife (who kindly reads his first drafts), his daughter (who prefers picture books), and his cat (who is illiterate).

Eric Andrew Newman currently lives in Los Angeles with his partner and their dog, but is originally from the Chicago area. He works as a librarian for a nonprofit foundation by day and as a writer of fiction and nonfiction by night. Recently, he was named as a finalist for the Robert J. DeMott Short Prose Contest and the Howard Frank Mosher Short Fiction Prize. His work has appeared or is forthcoming in Quarter After Eight and Hunger Mountain and he is at work on his first short story collection.