The Prose of the Mountains by Aleksandre Qazbegi 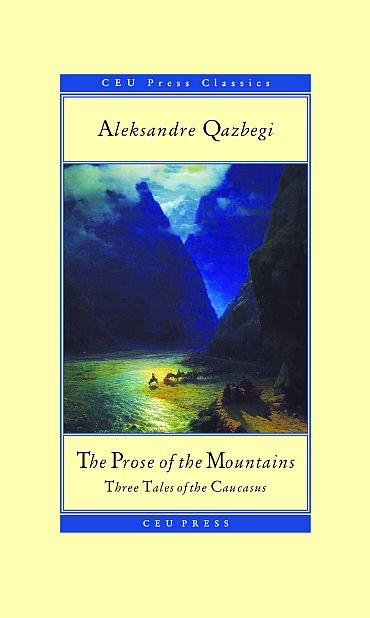 The Prose of the Mountains is an ode to and a chronicle of the life of the Moxeves, the Georgian mountaineers of the region of Xevi. Aleksandre Qazbegi (1848-1893) experienced it first-hand, living as a shepherd in the mountains for seven years. This episode is detailed in “Memoirs of a Shepherd,” the first of the three tales in the book: “[T]he son of a respected nobleman has no business being a shepherd, ” says the narrator. He is criticized by the rich, as well as by his fellow herdsmen, for his decision to rebel against the natural order of things.

But the narrator is convinced of his vocation. The life of a shepherd is described in painstaking detail as he speaks with tenderness of his sheep:

There is nowhere to hide from the incessant rain pouring from the sky like water from a bucket, and the shepherd is doused to the very threads of his clothing, as the marrow of his bones freeze solid and the wind tears away his cloak as the coldness prickles his skin. It is impossible for him to seek shelter because he must tend to his flock.

Eventually accepted by the community, he is selected as a leader of the transhumance. The first story revolves around the hardships of the journey, peppered by clashes with the local authorities, represented mostly by Cossacks. The latter are being very overtly criticized for their behavior and lack of morals. The narrator, an idealist, is vexed by the corrupt system: “…I began to understand the meaning of shepherd’s morning prayer, ‘God, protect us from Russian roads.’”

In the end, he must admit his defeat in face of the harsh reality. In this sense, the voyage serves as a journey of initiation for both the narrator and the reader, who catches a glimpse of the hard life of the mountaineers and the violence they are constantly surrounded by. Violence spawns violent feelings, which fill the following two stories. The second and the third tales are works of fiction, “legends of famous shepherds,” in the narrator’s words.

The second story, “Eliso,” begins with the expulsion of the Muslim Chechens from Georgia. Eliso, the daughter of Anzor, one of Imam Shamil’s lieutenants, is in love with Vazhia, a Christian. She is forced to leave him behind, torn between the duty to her father and her love for Vazhia. In spite of its clichéd nature, the story remains interesting on account of the setting. The real drama is the deportation of the Chechens. The sense of loss—of a home, of a lover, of family—is a thread traversing the whole narrative. As throughout the book, to blame is the Russian Empire and its heartless and greedy administration.

The third tale, “Xevis Beri Gocha” is also a tragic love story. The narrative begins at a wedding where Onise, the best man, the son of the local leader, Beri Gocha, falls in love with the bride, Dzidzia. But their love is forbidden, so Onise exiles himself in the territories of his uncles. He returns when the conflict with the neighboring Mtiuleti arises, in order to support the people of his village in the face of the impending battle. The reunion with his beloved is doomed to have tragic consequences for them both and for the community.

There are a few recurrent themes in the narrative. The first and foremost is the visceral dislike of the Russian domination. The Cossacks are invariably represented as evil and corrupted, constantly demanding bribes from the shepherds or tormenting them for amusement. But this sadly leads to flat characters and stereotypes: the Moxeve shepherd are good, the Ossians evil, the Chechen good, the Russian authorities evil.

In fact, much of the writing feels stiff and outmoded. The dialogue is stilted. The quality of the prose is not the greatest merit of The Prose of the Mountains. It is an interesting book because it opens for the contemporary reader a gateway to 19th century Georgia, written by a man who did not content himself with observing and recording life in that period, but also lived intensely. This page of history, with its complex struggles among different ethnic groups and with the expanding Russian Empire, comes alive for the reader.

The value of the last two tales lies in the great ethnographic detail. For instance, the wedding customs and the rituals surrounding the gathering of the temi (the council of elders) are described cinematically. We also catch a glimpse of the mountaineers’ beliefs and system of values. For example, during a sleigh ride, one of Onise’s friends rushes to admonish him for covering himself with a blanket (nabadi) in the cold and thus displaying weakness. Keeping an unstained honor is one of the main concerns of the Moxeves. Gocha’s blessing of his child, before he goes to battle, is shocking for the modern reader: “God, keep my child pure. Kill him before he shames himself. ” They are a closed community, as we see in these ritual words spoken at the wedding: “Don’t let the enemy kill him or convert him to foreign customs. ”

The mountaineers are often compelled to defend their independence with their lives. This is a recurrent theme of the last two tales. The Chechens are expulsed because they had the impudence to rally against the Russian Empire and establish an independent Islamic state under the rule of Imam Shamil. The Moxeves do all they can to resist the conquest of Nuzgar and are ready to pay for their independence with their lives.

In Qazbegi’s narrative, the differences between Christians and Muslims blur, in favor of a portrait of the mountaineer. It is a portrait which transcends the boundaries of the page, claiming its place in the world’s collective consciousness.

Aleksandre Qazbegi (1848–1893) was a Georgian writer, famous for his 1883 novel The Patricide. A native of Xevi, he studied in Tblisi, Saint Petersburg and Moscow. On returning home, he decided to become a shepherd. He later moved to Tbilisi, where he worked as a journalist.

Sophie van Llewyn lives in Germany. She is an Assistant Editor at Bartleby Snopes. She also writes. Her prose has been published by The Molotov Cocktail, Sick Lit Magazine, and 101 Words, among others. Find her on Twitter @Sophie_van_L .